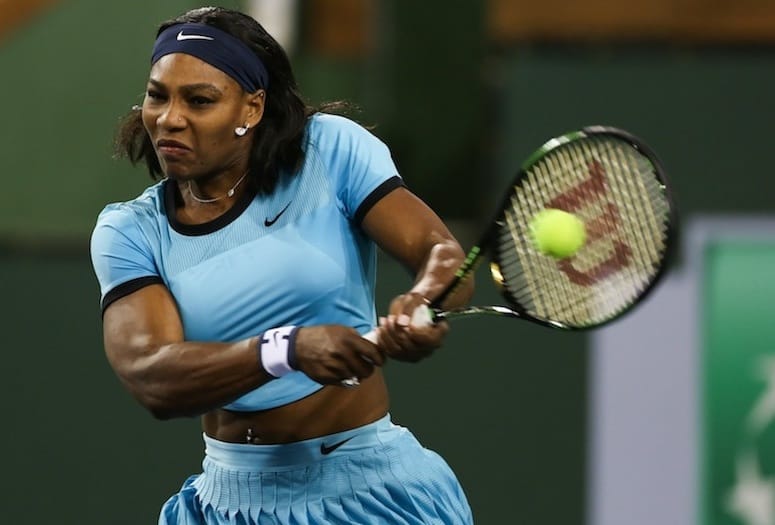 Healing is tough these days in a country where people always seem to be angry. Politics. Sports. Work. You name it and we are sputtering about it.

But Sunday afternoon, on a tennis court in a wealthy desert city, after the passage of time and the willingness of two sputtering sides to cool it, we are likely to have a healing process reach some sort of conclusion. You can’t call it a happy ending, because things such as racism, or perceived racism, leave never-healing scars. If we call it getting over it and getting on with things, we are closer.

When Serena Williams battled her way into the Sunday final of the BNP Paribas Open at Indian Wells, it presented a chance to return to the scene of the alleged crime and see that it has no leftover evidence. No yellow tape. No fingerprints.

She beat Agnieszka Radwanska in a Friday night semifinal, 6-4, 7-6 (1). It was a good match, tough competition, a good opportunity to show that, even at age 34, Williams remains the best in her sport.

And things got better for everyone involved — except the two semifinal losers — when boisterous, driven, talented Victoria Azarenka got past newcomer Karolína Plíšková, 7-6 (1), 1-6, 6-2. That also was a good match, and the winner, like Williams, a Grand Slam tournament champion, presents for tennis fans in the desert perhaps the best matchup they could get for the women’s final.

So, yes, Sunday’s final, barring the unusual or unexpected, will be all about tennis. Serena versus  Vika. One from the U.S., one from Belarus. Color of skin doesn’t count. Forehands, backhands, and serves do. Serena Williams walks onto the court at the BN Paribas Open in Indian Wells.

Which is the breath of fresh air so badly needed, wanted, and lusted for at one of the world’s premier sports events.

The backstory is so worn it has no treads left.

In 2001, shortly after the tournament had built a shiny new Taj Mahal of a stadium and, in doing so, announced to the tennis world that it was one of the big guys, Serena and Venus Williams played themselves into a Friday night semifinal matchup. But about five minutes before they were to take the court, Venus withdrew, citing tendinitis in her leg.

The fans who had purchased tickets, most of them rather expensive, got a doubles match instead of Venus vs. Serena, both of whom, at that time, were at the top of their games.

At the final, Serena took the court to play Kim Clijsters, a highly popular player from Belgium.

What happened after that is not in dispute. What motivated it will forever be.

Some people in the crowd booed Serena. The booing continued through much of the first set, which she lost. It subsided after that and Serena came back to win the next two sets and her second Indian Wells title.

The booing was duly reported, but presumptions about what caused it were not. To know what is in peoples’ minds is impossible. Even at age 34, Serena Williams remains the best in her sport.

A few days later, Richard Williams, Venus and Serena’s father, told USA Today reporter Doug Smith that the booing had been racially motivated. And so, for years to come, with Serena and Venus refusing to return while swallowing large fines from the WTA for being no-shows, the story kept popping back up. It was a story the media could not let die, nor should they have. You had a huge tournament boycotted by two huge stars.

Then, last year, Serena returned. This year, Venus came back and played. The festering sore had finally started to heal. The crowds embraced Serena in her first match and continued to do so. Now, it is just about tennis. If she plays well and comports herself well, the crowd responds appropriately. There is no color of skin here, as there never should be. Just tennis and character.

That she has made the final is perfect. That she will play a hard-charging Azarenka, who is likely to make sure all minds are on tennis and her passion to beat the best in the world, is also perfect.

The booing, and the 2001 final, and the accusations, and the finger-pointing, and everything else that got caught up and carried along with this 15-year story were almost completely absent this year.

It has been a tournament about tennis and competition and stars and entertainment. How nice.

All is not forgotten. In this land of anger, that’s impossible. But all is mostly stuffed away now, in some storage bin with old books and the kids’ grade-school crayon drawings. No need to revisit.

This is now a tennis tournament, a world-class event, minus the asterisk.