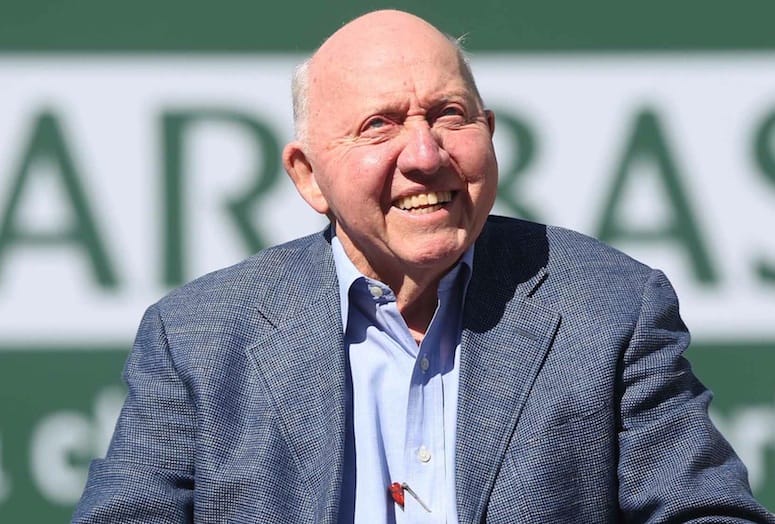 The BNP Paribas Open at Indian Wells is about to begin, just as Bud Collins has ended.

Somehow, strange to most but obvious to tennis fans, Bud would love that.

Great tennis in a great facility, will go on, will be special. That it simply will be played would be enough for Collins. That its timing will enhance his memory is important for the rest of us.

Before he died Friday at 86, Arthur Worth Collins Jr. had a racket. It was tennis. He knew about other sports, even wrote extensively about them in his role as sports journalist. But tennis was him, and he was tennis.

Do not be surprised if they have a special ceremony for him at Indian Wells. If you are there for it, do not leave your seat. You can get a hotdog later. Listen to what is said, because it will be heartfelt. Tennis loved him almost as much as he loved it back.

Long ago, Collins went beyond the boundaries of the simple definition of journalist. He was that, and proud of it. But he had become a legend in a sport of so many, without ever hitting a forehand at Wimbledon or a serve at the U.S. Open.

To tennis, he wasn’t Bud Collins. He was just Bud. Bud was tennis’ Pele. Tennis loved Bud Collins almost as much as he loved it back.

He was the man in the red plaid pants, or maybe yellow and green, or purple and pink. But strange as this may sound, he wasn’t so much calling attention to himself as he was to his sport. He would interview the winner with glee and admiration, the loser with compassion. They all stopped for him, no matter how many double faults they had just clanked or now many match points they had just gagged.

The main court at Indian Wells Tennis Garden, where he stood so many times to honor others and occasionally to be honored himself, needs to dress the lines-people in red plaid pants for a day. Honoring who he was and what he meant to tennis is a given. Doing so in the same flamboyant way he gave to tennis is worth considering.

This was not a man with a runaway ego, as many with his status have in today’s all-about-me media. He was a star TV analyst, a star columnist, most notably with the Boston Globe. But to those of us who sat near him and sweated with him on deadline, he was just Bud.

An all-about-me journalist would never take time for new writers in the press box, never sense the compassion needed for those arriving into his world for the first time, slightly insecure and plenty scared. With Bud, it was mandatory to find out who we were, where we were from and what we needed — an interview, a better work station, directions to the rest room.

Collins took care of it. He wasn’t just being helpful or solicitous. He was just being Bud. Bud Collins' colorful dress wasn’t so much calling attention to himself as he was to his sport.

He loved to write. When you knew everybody and everything about the sport, and have even written a best-selling encyclopedia about it, it should come easy. But Bud was like the 95 percent of us who practiced the theory of sports writing once perfectly described by the legendary Red Smith: He opened a vein and let it bleed.

Last year, Bud came to the U.S. Open in New York, pushed in a wheelchair by his wife, Anita.

He was there because they were naming the press center after him. Mostly, he was there to say goodbye.

He was ill, confused, a shell of himself. The smile and laugh that lit up every room was now more a plastic attempt, a look that hoped to be friendly but was lost and distant. We all knew, and so did he, that match point was around the corner.

The room was packed. We hovered about uncomfortably, each working his way to Collins’ side. Terms of endearment were whispered in his ear. Martina Navratilova knelt close and whispered. So did Chris Evert. His longtime friend and tennis writer, Cindy Schmerler, stayed close. The wonderful New York Times columnist, George Vecsey, whispered and grimaced. Veteran Art Spander, who’s an occasional Palms Springs Life website reporter, tried to say what would be appropriate when speaking to a dying man with whom you had probably spent more time in press boxes than dinner with your own kids.

Collins tried to respond, tried to put names to faces, tried to help us all through the difficult moment, just as he had helped us do our jobs.

Departing from Collins’ side, we quickly turned our heads and attempted to blink away tears.

When it was my turn, I felt he needed no further pledges of affection. If he was tracking all this, he got the point, and certainly the depth of feeling. So I whispered in his ear that I hoped he was still working on his backhand.

I think I got a glimmer of recognition. I will never know for sure.

To the end, first and foremost, it was about his sport, his lifelong racket.