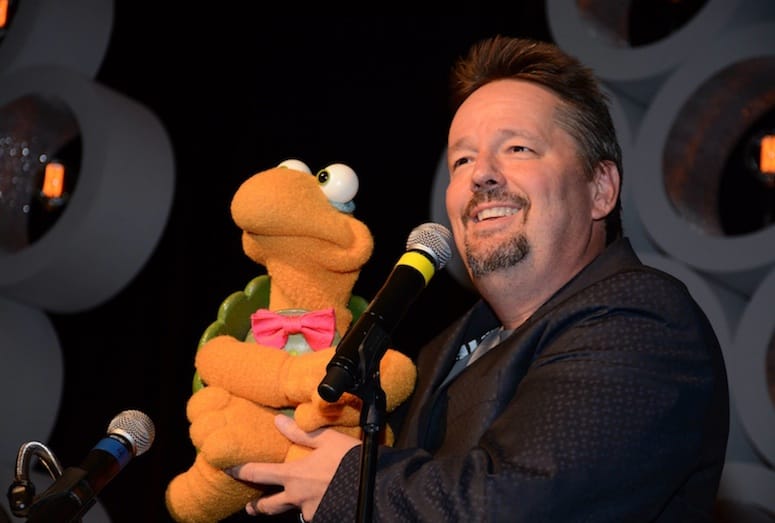 After struggling to “make it” in the entertainment industry for years, Terry Fator recalls a time when he played at a 1000-seat auditorium.

Sounds pretty good, right? Except the only person to actually occupy one of those seats was a lone 12 year old.

“It happened earlier in 2007 before I got the call for America’s Got Talent.  It was devastating and so discouraging,” he says. “I played from my heart and I just focused on the one 12 year old. The worst part was the custodians started to close it (the venue) down. I would say to anyone going through a low point, it’s OK to believe that your dreams are not going to come through. It’s not OK to stop working toward your dream or the dream is really dead.” Terry Fator with Hyphen, an original member of the Beatles until going solo.

In 2007, Fator won America’s Got Talent by mixing his talents for comedy, impersonations, ventriloquism and song to slay the competition. He’s been a headliner in Las Vegas and entertaining crowds ever since.

Fator will bring his “Country Christmas” show on Dec. 20 to Fantasy Springs Resort Casino in Indio.

“We’ll do a special Christmas show for the entire family,” he says. “If you love Christmas, we celebrate Christmas at my show. If you want to get into the Christmas spirit and feel happy, that’s what our show will do for you.  Pure joy. Great Christmas songs!”

Palm Springs Life recently spoke with Fator, who shared some insights into his world of entertainment.

Did you always know what you wanted to do? What other jobs did you have?
“I started out as a janitor and worked as a teenager. I worked at a steakhouse. Game Stop video store. I did odd jobs but mostly my entire career I was entertaining with my band, performing and finding places to perform.  I always knew ventriloquism was a part of what I had done and what I love. I didn’t realize the impact ventriloquism and impressions would have on people. I realized my strength and what people love are impressions thru ventriloquism. No one was more surprised than I that I won America’s Got Talent. I thought there’s not a chance I’m going to win.” Terry with Emma Taylor, the texting 12 year old with a big voice.

Why do ventriloquism, comedy, and singing with puppets appeal to so many?
“I think because it’s ageless and timeless. I do artists that my grandmother and grandfather, your parents, you and your kids can relate to. I have puppets that do every era of music ever recorded. I do dozens of impressions and comedy that is wide ranging…(my material) is just as funny to adults as well as kids without crossing that line. Dirty humor is easy humor. I take the hard road.”

What character do you most identify with?
“I think Winston because I’m a kid at heart. Winston is the kid in the show who is the most innocent. He’s all about doing impressions, having fun, and he has his dreams, too. I think every single one (character) is part of my personality because I created them. They are a part of me in a weird way or someone I’ve met.”

What are three things about you that your fans may not know?

• “I love to play video games.  It’s one of my favorite things to do to chill and to recharge my batteries.

• “I’m a pretty good cook. I do my own recipes. I follow the recipe but I’ll add a dash of this or that to make it my own.”