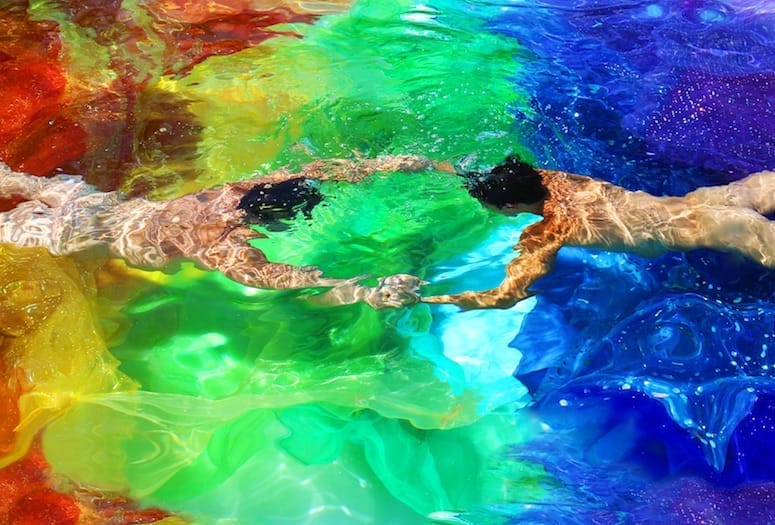 "Hands Across the Sky" by Terry Hastings, whose work will appear in the second-story gallery of the Palm Springs Cultural Center Sept. 16-30 during Cinema Diverse, the Palm Springs LGBTQ+ Film Festival.
PHOTOGRAPHS COURTESY TERRY HASTINGS

Terry Hastings’ canvas can have ripples. It shimmers in the sun. Objects can float on the surface. People have been known to jump into his canvas, but that’s rare.

The Palm Springs artist orchestrates his own version of water ballet and then captures it with his camera. “This basically is just my form of theater without having the giant crew, six weeks of rehearsal, and memorizing lines,” Hasting says, smiling. “Creating a story and then figuring out how to tell the story, but just in one photo, basically.”

His work is an off-shoot of David Hockney, a 20th century British gay artist who migrated to Los Angeles in the 1960s and played a major role in the pop art movement. Hockney, now 84, created a series of paintings of swimming pools during that same time including The Splash, which just last year sold at auction in London for $29.8 million to a Hong Kong billionaire. 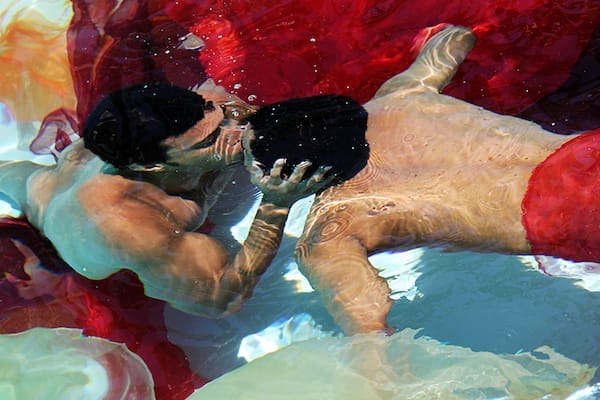 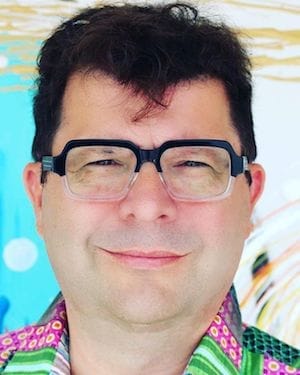 Like Hockney, Hastings has found “the water turns everything into an impressionistic painting. Just naturally. I can pick the colors that go in. I can pick what the model does. But it's still a little bit of chance with what the water will give me.”

Hastings’ artwork has appeared in a number of traditional settings like museums and galleries, but starting Sept. 16 you can see his work inside the Palm Springs Cultural Center during Cinema Diverse, the Palm Springs LGBTQ+ Film Festival after being asked by festival director Michael Green.

“I have long wanted to really expand the festival out of the film box and with our space upstairs, we have such a nice gallery space,” Green says. “I thought it would be great to have an LGBTQ artist. I know Terry and I really like his art.” 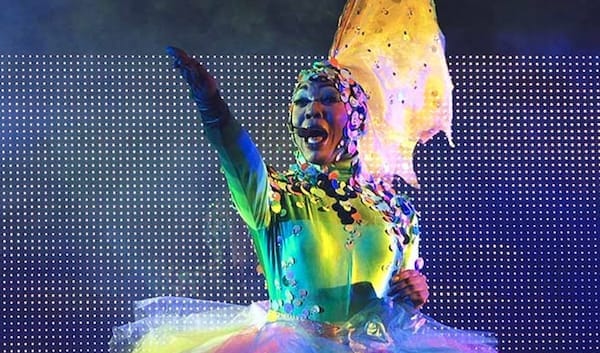 In addition, Hastings will handle the Q&A following the screening of the documentary, Being Bebe, which profiles Zahara Benet, the first-ever winner of RuPaul’s Drag Race. The first third of the film was shot in Hasting’s apartment when he lived in his native Minnesota, and he can speak to Benet’s early days as a rising drag queen.

But first, he chats more with Palm Springs Life about his art and the film.

Has your art always revolved around the pool?

When I first got here (12 years ago), I actually first worked out in the sand dunes, just north of town with large pieces of fabric. I referenced Singing in the Rain. There's the one dream sequence where Cyd Charisse has the scarf. Then she walks into the club and it blows in the wind. Then all of a sudden her and Gene Kelly are taken off to this giant sound stage. They've got the fans all placed around so this giant, 15-yard scarf of hers is blowing in many different directions. After taking these large pieces of fabric out to the desert, getting full of sand and everything, I needed to wash them and it's January, nobody's using the pool in my apartment complex. So I quick throw them in the pool to just get all the sand off of them. I looked down and I'm just like, "Oh, that's really cool, what's happening there." So once summer arrived and I could use the pool, then I was throwing fabric and bodies and anything else I could in the pool.” 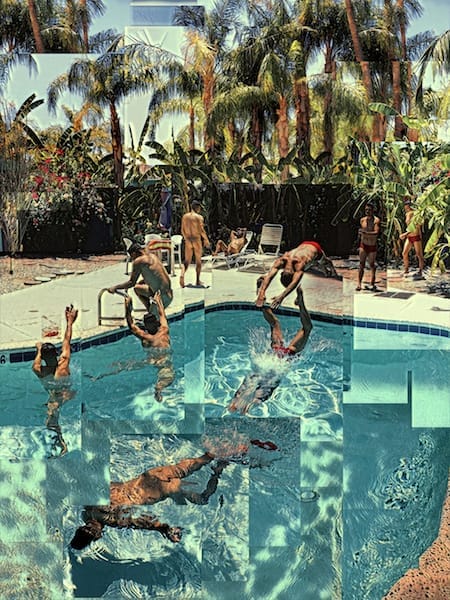 Are you comfortable where you are as an artist, or do you sense change is coming?

I get bored easily. I’m always trying to make these photos new and different. But still kind of still working with the desert in Palm Springs, because it's so prominent in whatever I do. But I don't see me moving. I'll keep coming up with new ideas. I work in sculpture as well. I created these popsicle stick masks, but then I also use them in photos and put them on models. So it's a fun combination of things. So I have a creative hand into what I'm doing as opposed to just capturing stuff.

How did you meet Zahara Benet?

The partner that I had at the time wanted to be a fashion designer so we opened up a clothing store. So we opened our shop, within a week BeBe walks into the store getting ready for her first major appearance in Minneapolis for Gay Pride. She was going to be on stage with Cindy Lauper.

What was the premise of the documentary?

Fifteen years ago, BeBe was going to the Miss Gay USofA pageant. Emily Branham, the film director, her sister was one of BeBe's backup dancers. This was going to just be a documentary about that pageant. But Emily never found a satisfying ending to it. So she just kept shooting. And kept shooting until last year during COVID and then figured out how to put it all together.

How much of the film takes place in your apartment?

Fifteen years later, the three-month project is done. So since it was only going to be three months, the major portion of it happened then. So all the interviews would happen at my place while BeBe was getting ready because I had created a studio in my second bedroom. I would transform everything. With a degree in theater, I could do set design and all that sort of stuff too. But we would shoot music videos. Lip-sync to music videos. The photos. Constantly just there. So that's why a whole lot of it took place in my place.