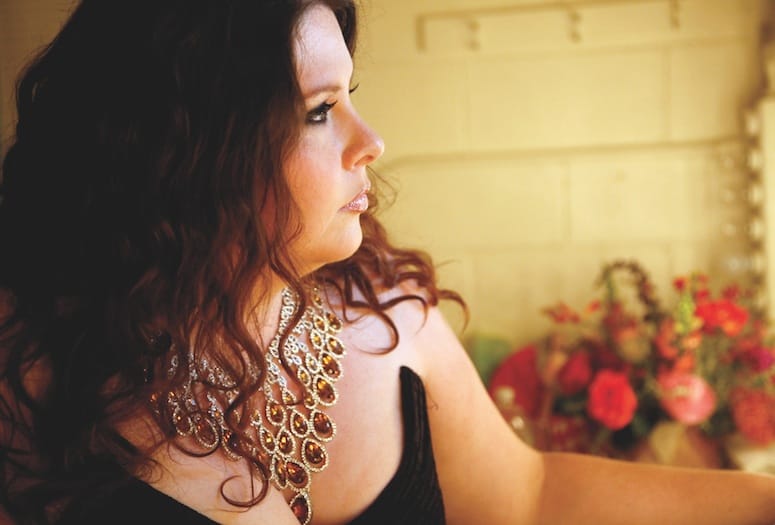 A vocal coach in community college said Angela Meade sounded like an opera singer. “I didn’t even know what that meant,” she says.
Photo courtesy of Angela Meade

Angela Meade knows what the word opera evokes in many people, because she once made that association, too.

“When you’re growing up and watching Looney Tunes, you see Bugs Bunny singing with Viking horns and a breastplate, and that’s opera,” she says with a laugh.

That’s probably what Meade would still think of opera if it hadn’t been for a fortuitous voice class she took as a community college student. Meade was taking courses toward a career in medicine and singing was just a hobby. A vocal coach said she sounded like an opera singer. “I didn’t even know what that meant,” she says. “But I started getting more and more curious. I got some recordings, and I learned more about the style.”

It turns out that opera was Meade’s forte. Although she had been singing in school choirs and with karaoke machines since she was a kid, it was opera that slipped on like a silky glove. “I came into it by complete accident,” Meade says. “But it felt very natural to me.”

Talk about your happy accidents. Starting in the mid-2000s, Meade rose to opera stardom by participating in vocal competitions, systematically taking on the most notable contests across the country. “It got to be a joke among my friends that I would do a competition every weekend,” she says. “But I got my feet wet with the smaller competitions and worked my way up. I found something that worked for me, and I kept doing it.” It paid off. Meade won 57 of the 60 musical competitions she entered, including the Palm Springs Opera Guild Competition in 2003. Angela Meade: “I hope that more people can come to opera and experience it that way. It’s the human experience on the stage.”

Meade’s competition circuit culminated in a victory at the 2007 New York Metropolitan National Council Auditions, the largest talent contest in American opera. A year later, as an understudy in Giuseppe Verdi’s Ernani, Meade made her professional debut at the Metropolitan Opera in the lead soprano role when the leading lady fell ill. Since then, Meade’s sumptuous voice has seduced audiences and critics alike, garnering praise for her world-class performances, including the title role for Vincenzo Bellini’s Norma at the Met and Elena in Verdi’s I Vespri Siciliani at the Vienna State Opera.

Opera News hailed Meade as “easily the most talked-about soprano of her generation,” featuring her on the cover for the annual Diva Issue, while The New Yorker raved, “Meade is astounding. … She has exceptional dynamic control, able to move from floating pianissimos to sudden dramatic swells.”

Meade returns to the Coachella Valley in December, presiding as one of the judges for the 32nd annual Palm Springs Opera Guild of the Desert — the vocal competition she once won. This year’s event is held Dec. 6 at the Helene Galen Performing Arts Center, Rancho Mirage High School. “It’s still a little strange for me to be on the opposite side,” she says. “The time has flown by, and … I still feel like the person I was then.”

Although Meade had the good luck to stumble into the opera world (finding herself quite comfortable once she landed), she hopes young talents will be undaunted and take on the challenge of the form. She firmly believes there’s no prerequisite for loving opera.

“The whole point of music is that it’s supposed to touch you emotionally and help you feel things you wouldn’t necessarily feel through a book or a speech or a TV show. And you don’t have to know opera in order to get that. You don’t need to know the words the performers are singing in order to get those moments of love or grief or humanity,” she says. “I hope that more people can come to opera and experience it that way. It’s the human experience on the stage.”

Meade might even be considered the Pied Piper of opera, enticing people to come over to the classical side. Take, for instance, Meade’s new neighbor, whose apartment is situated adjacent to Meade’s shower — the shower where Meade sings every day. “I can’t help but sing in the shower,” she says. “The acoustics are perfect.” Of late, Meade has been getting sudsy to Norma, the role she brings to the Los Angeles Opera during the 2015–16 season. “I haven’t even met my neighbor yet, so she might think I’m crazy,” Meade says with a rich, warm laugh. “But she’s getting a free show!”