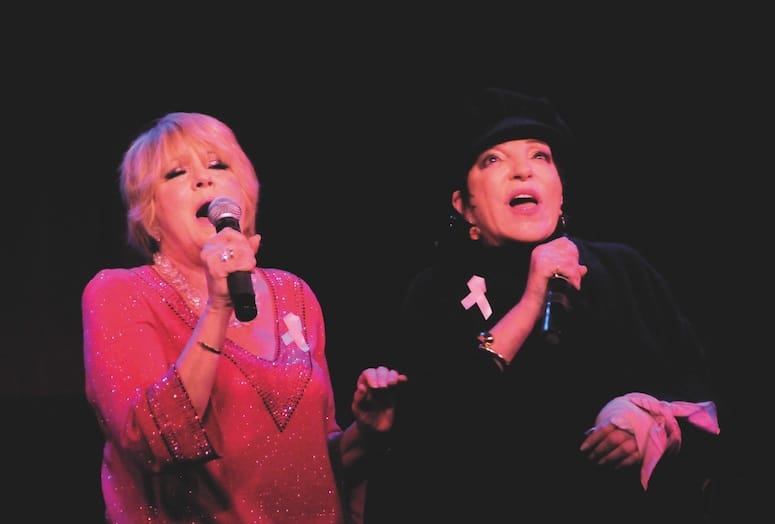 Palm Springs resident Lorna Luft has a long list of life and show business accomplishments. The most recent is being a cancer survivor.

Diagnosed in December 2012 with stage IIA breast cancer, Luft was shocked. “My initial reaction was denial, then came fear and disbelief, followed by I don’t know which way to turn,” says Luft. She opted for a lumpectomy, followed by courses of chemo and radiation therapies. It was an extraordinarily difficult, frightening, and painful experience.

Luft reached out to The Actors Fund for help and guidance. “This organization is so vital and important, and they take care of everyone from box office to musicians,” she says. “Actors live from paycheck to paycheck. Some people don’t meet union requirements as far as hours worked, and you can find yourself in dire straits.” When she made that phone call, TAF promptly told her, “Whatever you need, we’re there.” In the 19th century, the performing arts often had an unsavory reputation. People in the theater took care of fellow actors and their families as well. Initially the fund focused on such concerns as securing burial plots and arranging living accommodations, mostly at the Actors Fund Home on Staten Island. “We started back in 1882 and while the name is The Actors Fund, it’s not just theater, and it’s not just Los Angeles and New York,” says Western Region Director Keith McNutt. “It’s always been all over the country. We’re there for anyone in radio, film, theater, opera, TV, comedy, music, and dance.”

Today, TAF has become a beacon for those involved in every area of the entertainment field, which includes technicians, designers, grips, directors, editors, composers, screenwriters, and producers who create the magic that dazzles audiences. About 6,000 people are helped annually in the western region, which McNutt has stewarded since 2006.

He has a deep understanding of what show business people have to deal with on an ongoing basis and leads his division with a humanistic and compassionate approach. TAF offers 25 programs centering around health insurance, affordable housing, money management, tax preparation, computer education, and a career center that helps people who are sidelined find parallel work, emotional counseling, social and senior services.

“We’re there to help anyone in entertainment anywhere in the country, anyone who works professionally. That’s what we’re known for,” McNutt says. “We spend about two to three million a year for emergencies — rent, utilities, doctor bills — and that’s always paired with professional social work services.” The assistance covers “emotional counseling, support groups, advocacy with government systems and bureaucracies, plus all and any kind of life needs that the person may have.” In Los Angeles, the entertainment industry has a long history with Palm Springs, originating when the desert became a playground for Hollywood stars. Celebrities were kept under such tight scrutiny that their contracts stipulated they couldn’t travel more than 100 miles from Los Angeles. Palm Springs became a mecca for the rich and famous as it just eked in under the wire at 99 miles. Now, it appeals as an idyllic haven for show business retirees, particularly since an established built-in community exists.

Though no immediate plans are afoot to open an Actors Fund office in the desert, information about its activities abounds online.

“We reach out through our own website and send weekly e-blasts,” McNutt says, “with lists of both current and former participants as well as donors.” Geographically the group’s reach encompasses Palm Springs and the surrounding desert area with our burgeoning population of aging baby boomers and new and forthcoming industry retirees.

With medical issues, “you never think ‘it will be me,’” Luft notes. The Fund “helped me with medical bills, answering questions, information, guidance, and dealing with the insurance. I knew I had to pay it forward for all the help that was given to me during my ordeal.” Enlisting big half-sister Liza Minnelli and other theater friends, she hosted a show called Pink Party at New York City’s Birdland in October 2013. The two evenings of performances generated $150,000 to benefit The Actors Fund.

“They scoop us up and take care of us and get us back onstage, and they don’t make us jump through hoops or red tape,” says Luft. “If we are lucky enough to be in the entertainment business and do fall on hard times, they are there to get us on our feet.”