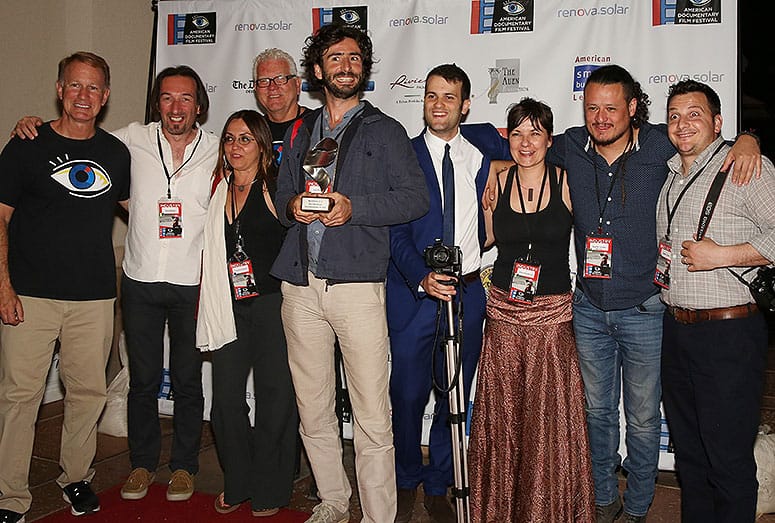 He then announced the winners of the 5th Annual festival: Best International Feature: Tie: In California from France, and Skin and Bones from Denmark; Best International Short: Tie: Zoe from Australia and A Single Breath from Italy, directed by Luca Rosini, who absolutely beamed as he accepted his award; Best American Feature: God Knows Where I Am; and Best American short, Cuddling With Strangers.

One special feature of AmDocs is the Film Fund Pitch Competition when filmmakers ask for much needed money to complete their films. The three winning pitches were United Skates, The Penny Black, and Becoming April March. Moby Longinotto's feature debut, The Joneses, closed out the festival. During the Q & A, Moby described the seven years it took to shoot the film about 74-year-old transgender divorcee Jheri Jones and her family in Bible Belt Mississippi.

Filmmakers, host families, sponsors, and volunteers all mingled inside and out at the wrap party at Appetito Cal-Italian Deli. Housing chair Elizabeth Press and husband Bob have volunteered since the beginning, as has Operations and Development Director Debbi Hinton Money.

Of the 150 filmmakers and industry guests who descended on Palm Springs, 33 were housed with host families. New this year was an arranged tour for filmmakers to see local attractions such as the Indian Canyons, the Windmills, and Cabot’s Pueblo Museum. Hinton credited the 100 volunteers, partner hotel The Riviera, and the Palm Springs Bureau of Tourism for their support.