Bob Mackie Dishes About Designing for Divas Like Cher, Streisand 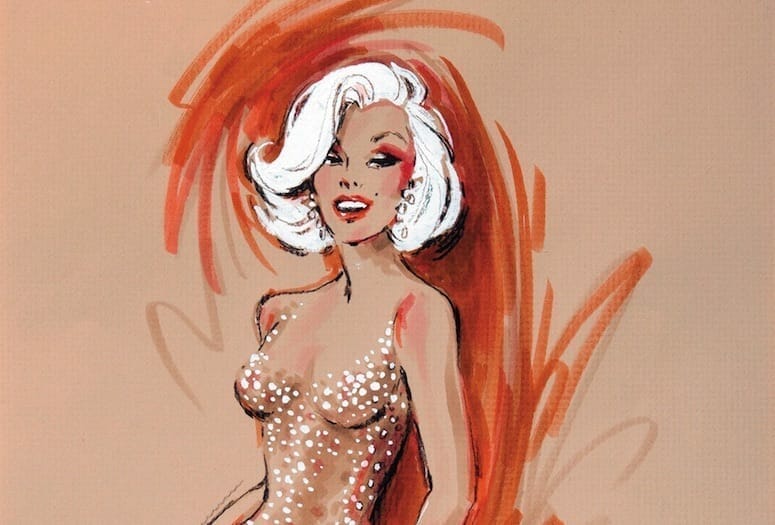 Bob Mackie designed the dress that Marilyn Monroe wore when she sang the infamous "Happy Birthday" to President John F. Kennedy.
SKETCHES FROM THE COLLECTION OF BOB MACKIE

Things that can’t be done: Try to imagine superstar entertainers like Cher and Carol Burnett without their signature glittering gowns created by Bob Mackie. The designer and Palm Springs resident (and recent Palm Springs Life cover subject) has been synonymous with Hollywood glamour since the 1960s when he earned his credentials sketching clothing for The Judy Garland Show and later designing shimmering dresses for popular variety programs, such as The Carol Burnett Show and The Sonny and Cher Comedy Hour.

A new lavishly illustrated book about the Emmy and Tony Award-winner and three-time Oscar nominee, accurately titled The Art of Bob Mackie, offers a comprehensive, rollicking journey through this career from his childhood fascination with movie costumes to designing breathtaking costumes for solo named divas like Barbra, Diana, Liza, Raquel, RuPaul, and Pink.

In a new interview with Palm Springs Life, Mackie discusses the book about his illustrious career, and shares stories about Cher, Carol, Barbra, and Liza. 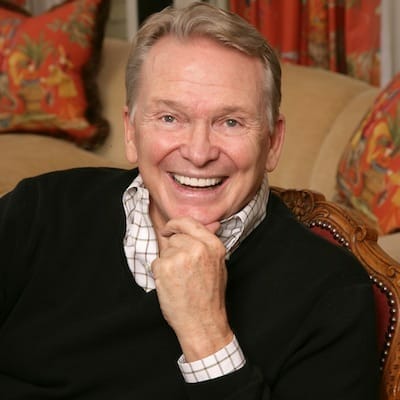 Your new book is gorgeous. How did it come about?

Frank [Vlastnik, the book’s editor] came to me and asked if I would be interested in doing a book. I already had a book, which I still like very much, but it came out in '99. I just said, "Well, I guess it's time for me to do a new one." It's over 60 years of my career. It's just crazy when I think of how old I am. Some of my youngest clients when I was starting out were in their teens, the Chers of the world, and are now in their 70s. They had these incredible careers, God bless them.

Are there costumes or gowns you designed early in your career that you're surprised are still getting attention today?

The funny thing today is you see all these young actresses and want-to-be famous people going to these big events, dressed in literally knock-offs of things that I did for Cher. It's kind of flabbergasting because by the time I finished the whole Sonny and Cher, and Cher this and that, everybody was kind of sick of the look. I was. All of a sudden, they get on the internet, and there are these people who have these clothes copied line for line, bead for bead. I'm still shocked at it myself. Usually, whoever is writing the article will give me credit or they'll find a picture of the first one and put it right next to it. Cher can't quite get over it.

One of your most famous creations is your sketch for Marilyn Monroe's nude dress when she serenaded President Kennedy with a very sultry rendition of “Happy Birthday.”

I worked for Jean Louis [the late costume designer and Palm Springs resident] at the time. We were doing the Marilyn Monroe film [Something’s Got to Give] that was never completed. He came in one morning and said, "I want you to draw this for Marilyn." He didn't tell me what the event was. I didn't even know until a couple weeks after that, that they made the gown, and she was at Madison Square Garden. They sold that dress three or four years ago on auction for $4 million. I never got to meet Marilyn. 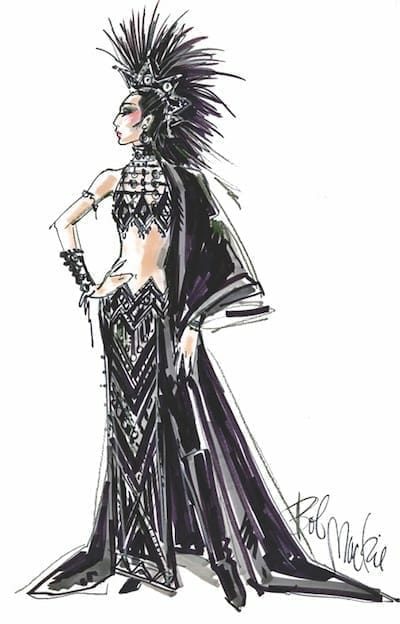 Bob Mackie designed this outfit for Cher when she was an awards presenter on the Oscars.

What's your opinion of the controversial Marilyn statue in Palm Springs?

I can't think of a better place to have a statue of Marilyn Monroe, to tell you the honest truth. We're not in Paris at the Louvre. We're in Palm Springs. I like the museum there very much. You don't have to treat it like it's some kind of cathedral or religious artifact. It's all about Marilyn and Hollywood, and that's what Palm Springs is. So, just leave it alone. I hate to think about it being moved away after a year or so.

Another of your early jobs was working on The Judy Garland Show. What are your memories of being on that set?

When Judy had really good guests, there was competition in her mind. Liza [Minnelli, Garland’s daughter] was brilliant. I don't know what's going on now, but Liza was fabulous. Liza was only 18 when she did that show. I had to take her and get her costumes made. We became really good friends.

I ended up doing her wedding dress when she married David Gest. I got a little nervous when he told me he had a whole Shirley Temple doll collection. Then when I read that she beat him up, I thought, "Well, okay." The wedding in New York was a riot.

So you were at the wedding?

My assistant and I were there. We were like the mothers of the bride, at the back of the church spreading out the train. I said, "What are we doing here? This is ridiculous." But the people that were in the church were so funny. There was every TV star, or Broadway star, or anybody. Donald Trump was there. The world was in that church that day. It was just the craziest experience ever.

Elizabeth Taylor was Liza’s maid of honor. Did you design her dress?

No. That was extra funny. Elizabeth looked terrible at that wedding, because she took a nap that afternoon. She had Jose Eber flown in from L.A. to do her hair and she slept right through her appointment. So, they stuck a cocktail hat on top of her messed up hair. Then she got to the church and had forgotten her shoes. She had her bedroom slippers on. Then they had to postpone the wedding a little bit, so they could go back to the hotel and get her shoes. The whole day was just amazing. 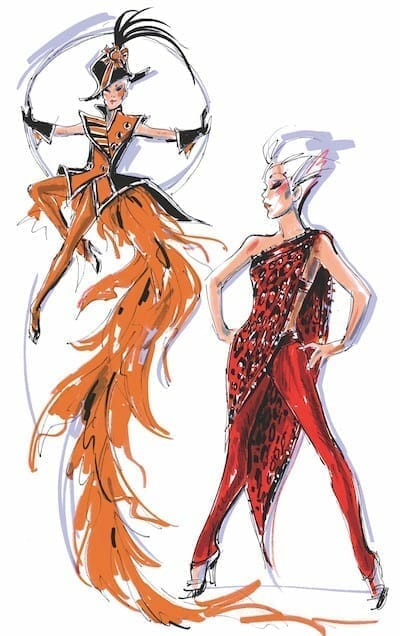 You’re practically synonymous with Carol Burnett. In the book you joke that the famous curtain rod dress you created for her spoof of Gone With The Wind will be on your tombstone. What was the night she taped that like?

I didn't figure out what to do until the night before we taped. I called the art director and said, "Get me some of those drapes with the fringe on it, and a couple of those ties with the tassels, and I think I've figured this out finally." It was really scary if you don’t get your laugh, but we did it, and it got the biggest laugh ever. Here we are, still talking about it.

Like Liza, you met Cher when she was still a teenager. Did you have any idea then that she might become such a tremendous fashion and cultural icon?

She was so beautiful. She had a tiny sundress on, and her hair in two side ponytails, looking very Audrey Hepburn-like, with that curvy but thin, thin, thin little body.

Then when I put a couple of sexy dresses on her I thought, "Oh, dear. We're in trouble here. She looks too good." I thought we were going to have trouble with the censors, but they were getting such ratings on that summer show that all the sudden, the censors were told to clam up and don't make trouble.

You received an Academy Award nomination for your costumes in Lady Sings the Blues. How was it working with Diana Ross?

That was crazy because we had to do it in two weeks. They thought, "We'll get all their clothes out of stock." Well, Diana was already a diva, even though she hadn't done much yet. She wasn't about to wear a lot of old, second-hand clothes, believe me. I was busy doing Cher and Carol Burnett at the same time. So, I got Ray Aghayan, we were partners in life and in business, and we did it together. I didn't do the whole movie. We did Diana's clothes. Some were old clothes from my closet that I redid for her. She had a beautiful, curvy but skinny body, which is really the best for clothes.

You received another Oscar nomination for Barbra Streisand’s Funny Lady. What was your experience with her?

Barbra questions everything and she always will. That's just the way she is. I met her first on The Judy Garland Show, when she was on with Judy, singing with Ethel Merman, the three of them together. She had some new fancy shoes from Italy that she got and they didn't match her other dress. She wanted to get them dyed, but she was afraid. I said, "I'll dye them for you." She didn't trust me, so I took her down to the wardrobe room. We got the shoe dye out because they were white and she wanted a creamier white. I tested it. I made a sample on some satin. She saw me and I went to start to dye them. She grabbed the dauber out of my hand and dyed the damn shoes herself. That's Barbra. 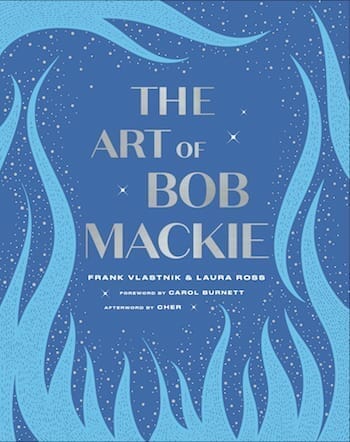 What's your opinion of TV programs like RuPaul’s Drag Race and Project Runway? Do you think they're inspiring another generation of designers?

I'm going to get in trouble because I've been on both those shows. I don't watch those shows because I don't always like the advice they give, like on Project Runway. I go, "Wait a minute. Who is this person telling them what they did wrong?" I'm not mentioning any names, you notice. Then the RuPaul show became like a Project Runway in the beginning, because they all had to make their own clothes, which I thought was just ridiculous. How can you be a good drag queen and sew, too? But there are a few who can. That's for sure. Ru always knew just the kind of thing he wanted. He had a great sense of style and still does.

The Art of Bob Mackie is available where you buy books..

• READ NEXT: The Top Vote-Getters for Best Hotels in our Best of the Best 2021.