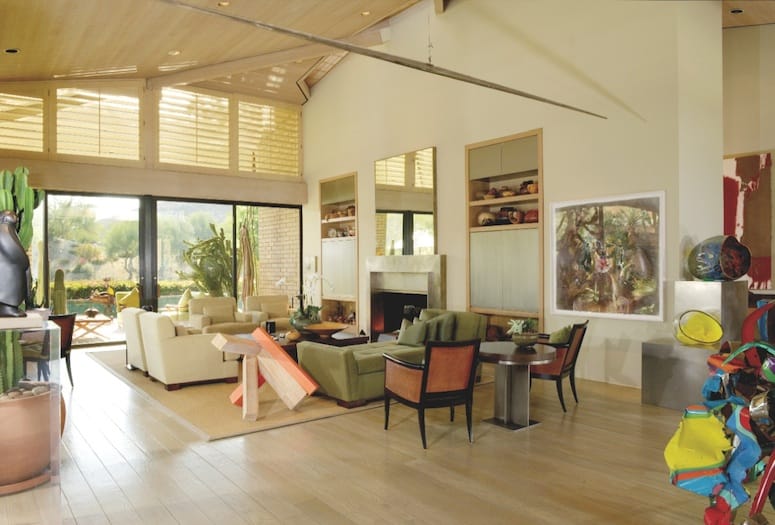 When artist Bob Van Breda says, “I’ll be in the studio,” he could mean any one of four. When he and his wife, Dallas Price, are at their Vintage Club home in Indian Wells, she’ll find him in the garage sketching, sculpting, or bringing new life to found objects.

Four residences and four studios keep an artist’s life interesting. Perspective shifts, depending on the address. Ditto for his mediums and subject matter.

“Bob creates different art in different places,” Price says. “In each home he works a little differently.” In a 17th-floor condo above the bay in San Francisco, Van Breda homes in on prints and drawings that lend themselves to the space’s smaller footprint. A Sonoma eclectic country home often inspires sculpture and assemblage. In Santa Monica, his studio takes over one garage of a glass-and-wood home on 11 levels by modernist architect Ray Kappe. The captivating Westside home seems tailor-made for his studies in pencils, sharp little sculptures that are a Van Breda trademark — the angled writing instruments, precariously frozen in space, can soar upward of 15 feet. Van Breda’s work also lives in the permanent collection of Palm Springs Art Museum and Yale University.

“Having several studios can be challenging at times, but the spontaneity makes up for it,” Van Breda says. “Getting away from a project allows me to think about it and not push the process.”

Works in the Vintage studio are born of less precision and order. Here, Van Breda favors solar-powered water droids he can toss in the pool and raw assemblages that have roots in found objects. “The desert is adapted to that,” Price says. “You find a lot of things as you walk along.” Recently Van Breda rescued eight “huge, dramatic doors” from a residential demolition site, Price says. “Bob has a unique quality to find and see beauty in detritus.” After careful patina restoration, enhancement, and arrangement of the doors, he created four hanging diptychs, one purchased by local patron of contemporary art Donna McMillan.

Bob admits it might be nice to have a larger studio, separate from the house in Indian Wells. “But then I would not be able to get up in the middle of the night in jammies and slippers and tweak something,” he adds. Homeowners Bob Van Breda and Dallas Price at home pose next to a painting by Chuck Arnoldi and in a chair by Peter Shire.

The couple’s art collections also mold themselves to each locale. “Sometimes we see a piece and we know it would be fabulous only in a certain home,” Price says. “It’s a collaboration everywhere we go.”

As it turns out, Price has picked up more than rocks over her 20 years as a burgeoning collector. Her adventurous spirit led her to climb each of the world’s Seven Summits (the highest peaks on each continent) and tote back rocks from every one. These are displayed and labeled in their Santa Monica home.

Price’s interest in filling her homes with art was sparked by Native American bowls, baskets, and kachinas. “I just love the work of the American Indian,” she says of a collection that began in her Santa Monica home. “Then I started collecting contemporary art and it moved the [Native American] art out. I thought the desert would be the perfect place for them, so I started putting them there. Now [the desert collection is] a combination of the two, which I love. It’s a wonderful relationship.”

As is the pair’s one-artist, two-collectors dynamic. “We’ve been married 13 years. [We have four homes because] we each brought two houses to the relationship,” says Price, adding that they have owned their home at the Vintage Club since 1999. Their complementary collections have expanded to fill each one with a different aesthetic. Along the way, Price and Van Breda have become friends with a diverse group of artists.

Price is content collecting. “I could not draw a straight line, so forget a crooked one,” she says. “I’m an appreciator of others’ work.” She sums up her approach to collecting in just four words: If I like it. “People ask if I collect certain mediums, artists, or periods. I don’t. I have a very open collection of things that capture my attention. I got off to a slow start,” she adds. “But 20 years later, it’s gotten suicidal. And it all mushroomed from a single Claes Oldenburg drawing.” In the master bedroom, a shelf above the bed holds crystal hearts the couple has gifted each other with over the years.

Today, the couple’s collections mix found objects with rare midcentury gems, serious commissions, and everything in between. A wall hanging in barbed wire shares the home with Dale Chihuly glass, John Chamberlain and Joel Shapiro sculptures, and myriad prints, paintings, and other works by Albert Ohlen, Peter Shelton, Ed Ruscha, Wangechi Mutu, Allan Houser, Joe Goode, Chuck Arnoldi, Ed Moses, and George Condo. In shepherding a collection this expansive (as well as three others spread across the state), Price says, the exacting art of display factors in significantly.

“Groups like to come and see our contemporary art collection in Santa Monica and often comment on how I place the art. I’ve had no formal training; it’s a natural thing for me,” she says. Her college courses were all business. Now she kicks herself for being so practical. Art “was always a buried interest that never got to surface because of my circumstances,” Price says, referring to her upbringing of meager means. During the tough years after her mother’s death, her father drove the family from Pasadena to the desert, where he found solace. Price carries on the tradition, finding peace and joy in rising early to watch the sunrise or walking the hills near their home.

Price’s career as an interior designer of golf course clubhouses for the American Golf Corp. stemmed from her innate skills in placement. Now she focuses on philanthropy, outdoor adventure, and collecting. Van Breda retired from commercial real estate in San Francisco. He graduated with a B.F.A. and “he is, and has always been, an artist, primarily a sculptor,” Price says. “He’s extremely creative, has a degree in (interior) architecture, and was in the business for a time.” Between sessions in his studio, Bob sketched out his concept to remodel their desert home. “I told him my wish list and he made it happen,” says Price. She raves about the cook’s kitchen, vast L-shaped work space, and expanded dream bathroom. Behind Van Breda’s design for his-and-hers towel bars of bent metal stands a glass-walled outdoor shower.

“We open the windows and it’s like being right in the desert,” effuses Price. Even so, she names her closet as the best room in the house. “I yapped for years about how small it was. When Bob came into my life, he did something about it. It was so dinky before. Now it’s luxurious. One end is golf; the other is everything else.” Glass shelves enable the petite Price to peruse her shoe collection from below.

Van Breda approached the remodel from the inside out, start to finish. “We knew we had the art to finish the process, but we needed to start by carefully designing how everything was going to fit and work together,” he says. “The end result is details, lots of details.”

With living quarters that now feel worthy of their art, they now spend as much time at home as possible, Price says. Of the four homes, the Vintage is their place for fun and friendships. For Price, it also brings a deep sense of comfort and familiarity.

“I like to quietly get out of bed in the early morning. Barefoot and in my nightgown, I just love to see the sun coming up,” she says. “It’s purple mountain majesty. I know whereby they came to those lyrics.” From the couple’s irreplaceable works of art to nature’s morning light and artful rocks, “everything about the desert is special to me.”