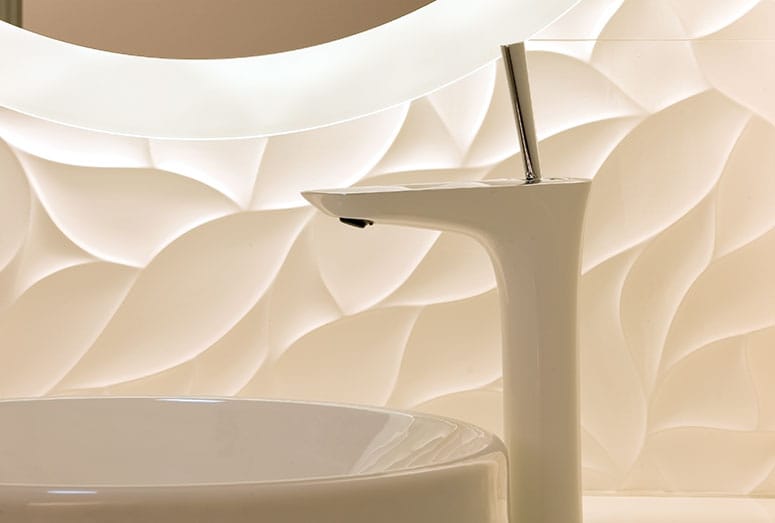 When a room begs to be reimagined or a listless wall yearns for extra attention, it can be a natural first instinct to chase after a fresh paint color or flamboyant new wallpaper. Visual excitement comes in more of a whisper, however, when walls become a sculptural piece of art.

“It’s lively and contemporary,” says interior designer Mark Nichols of Mark Nichols Modern Interiors about the sculptural forms that he and his clients have come to seek out for accent walls. “It’s another way to express beauty created by modern technology, and a great option for how to treat what would otherwise be just a boring wall.”

Whether walls take on new shape from a layer of porcelain, wood, or MDF (medium density fiberboard), they are instantly reinvented, especially under strategic lighting. “The lighting is very important, and not always easy to get right,” Nichols notes. “Of course, if your wall is carved from real wood and evenly lit with natural light, you (and the wall) are golden. But in a niche or anywhere that might benefit from play on shadow and light, it’s best to do some experimenting with different light beam spreads before fully committing.”

Niches and wall-to-wall expanses offer an ideal placement for a sculptural pop, because the material’s edges are unfinished. Another rule of thumb, says Nichols: porcelain in wet areas (such as a kitchen backsplash or bathroom feature); wood or MDF in dry areas. “You can use porcelain in a dry area if you really like the look of it, but you will have grout joints” that aren’t an issue with MDF, he adds.

Nichols says he first became aware of the attractive and tactile aesthetic of sculptured walls in commercial interior environments where they livened up any large, flat expanse. “Sculptured walls were first made of a drywall product that was expensive and not offered in a wide range of patterns,” he recounts. “Cabinet shops using computer-run (computer numerical control machines) began experimenting with pattern on 4-foot-by-8-foot panels of MDF (which is what the inside of an unfinished cabinet is made of ) and quickly discovered that these panels would be cheaper to produce and they could create a variety of different patterns. Soon after, we began to see them in the consumer marketplace.”

On the trend horizon, says Nichols, is the further development of these panels as freestanding walls with a very three-dimensional quality — so beautiful that “they almost appear to be carved,” he says. The best part about sculptural walls? They can be installed and left raw, painted, laminated to look like lacquer or other species of wood, or even made to resemble metal or carbon fiber.

Another trend hasn’t been catching on as quickly in his circles. “I’ve been saying brass is back, much to the horror of some clients,” Nichols says, smiling. “But it was nice to see it validated by The Wall Street Journal in the recent piece on PS Modernism. Wasn’t it great to see so much has been accomplished here in Palm Springs on the national radar? PS, I love you.” As a backdrop to a whimsical light fixture and a flat-screen TV set into an off-center niche, this smartly lit MDF panel fireplace cladding by Mark Nichols Modern Interiors catches the eye with a vertical pattern.