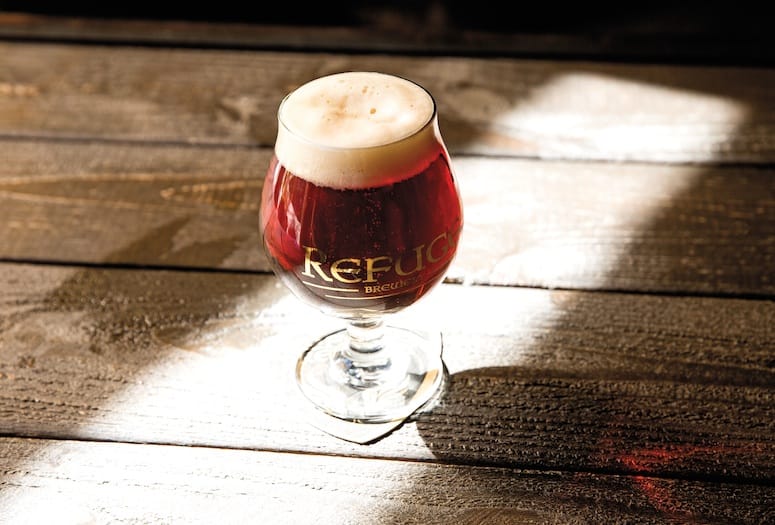 Refuge Brewery is one of several located in Temecula and surrounding towns known better as wine country.
PHOTOS BY JOE TORENO

It’s been said that it takes a lot of great beer to make great wine. Winemakers, support staff, cellar workers, and grape pickers rarely reach for a nice big glass of cold red wine in the middle of harvest.

This interesting intersection of beverage cultures isn’t necessarily new; the two worlds have been happily colliding in recent years to produce rich and elevated, slow-sipping brews to pair with nearly every kind of food.

It started with an early craft beer pioneer, Vinnie Cilurzo. Cilurzo grew up in a winemaking family in Temecula, where his family-owned Cilurzo Family Vineyards, one of the region’s first wineries (40 acres of vines planted in 1968). 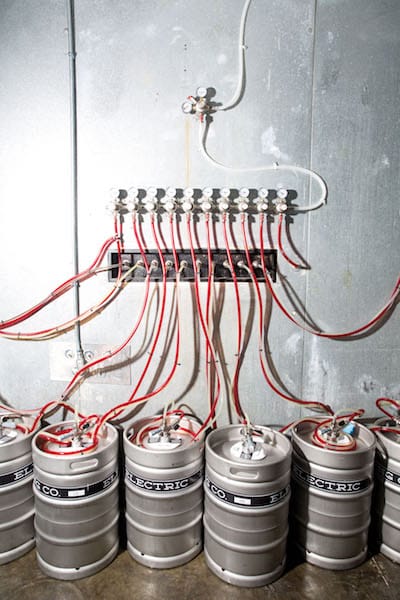 “Each brewery has it’s own little personality,” Ryti says. “But at the same time, they all are very collaborative and work together for a common goal, and that’s to make the Temecula Valley beer scene notable. That has been proven by their recent GABF [Great American Beer Festival] medals [and] medals at World Beer Cup, L.A. International Beer Fesival. [For some breweries] their distribution … is out of state. Ironfire now has beer in three countries.”

Black Market Brewing opened in 2007 in an industrial garage and four breweries followed in 2012. In rapid succession, Aftershock, Refuge, Wiens, and Ironfire all opened within about 30 days of each other.

One of those breweries has built a thriving business taking the ideas and concepts of Old World Belgian breweries and blending them with modern brewing techniques and styles. It was December 2012 when Refuge officially opened to the public. In April 2013, Mitch Steele (former brewmaster of Stone Brewing) visited the brewery and became an immediate fan. He introduced Refuge to the Stone distribution team. At the time, it was the youngest brewery ever to be brought into the portfolio. While Refuge’s Blood Orange Wit and Grapefruit IPA are top sellers, brewers love experimenting with barrel aging and souring techniques.

“Everyone seems to think there’s a stigma that the wineries hate the breweries and
vice versa,” says Ryti. “That couldn’t be further from the truth.” 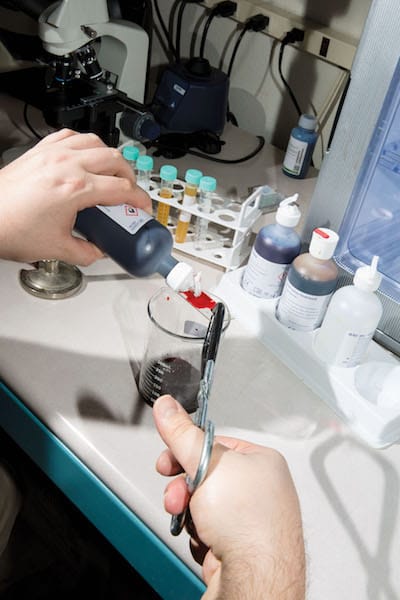 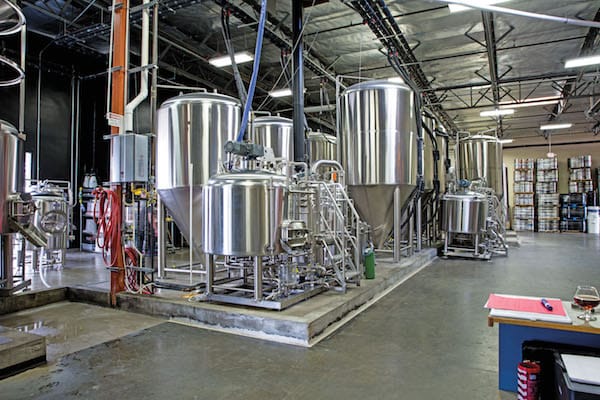 Curt Kucera of Refuge Brewery designs his own brew systems as the chief technology officer and co-founder of Ss Brewtech. At left is their 5-bbl (barrel) pilot system and 40- and 60-bbl tanks.

“We partner with either different wineries or grape producers and we do a blend of a beer that’s typically based on our Belgian Triple and also about 30 percent grape must, which is freshly crushed grapes — essentially the juice. Then we ferment them together with our standard Belgian Ale yeast to come up with a really unique style of beer that’s just not real common out in the industry,” says Refuge owner Curt Kucera.

“You have to be close to wine country to [use grape must]. And that’s where it was popular back in Europe: where they had wineries near larger beer-producing areas.”

In 2015, Refuge grew nearly 300 percent and became the second fastest-growing brewery in California. Earlier this year, they started distributing beyond their local turf, sending product as far as San Francisco. Their beers are currently available in about 3,000 locations. To keep up with demand, the brewery will produce about 7,000 barrels this year. 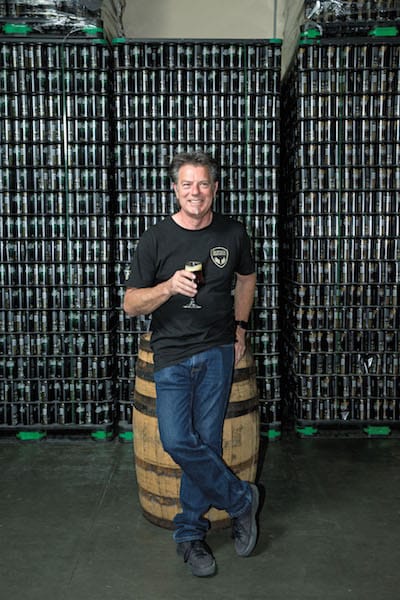 “We get together and we meet routinely with the city to talk about promoting ourselves,” Kucera says. “The city is looking at having a Brewery Awareness Month, if you want to call it that.” 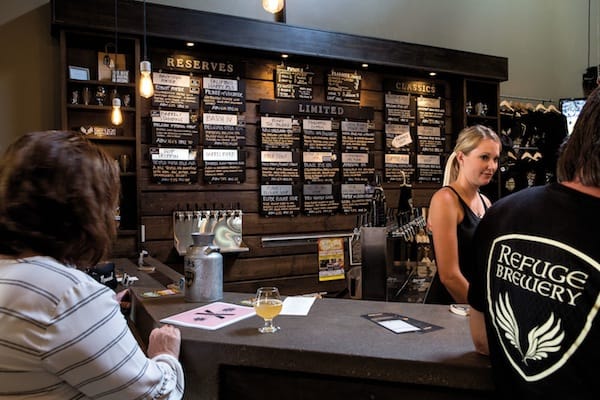 Refuge taproom typically maintains around 20 beers on tap at any given time.

The call for an official celebration of craft beer in wine country came about when the City of Temecula hired a company to find out what the local population is imbibing. They found out that 54 percent of residents within 15 miles of Old Town Temecula prefer craft beers. This was an eye-opener for city officials — especially since the breweries contribute to tax revenues in Temecula and the surrounding cities. Last year Curt Kucera spearheaded brewery upgrades by proposing changes to the city codes.

“Everyone seems to think there’s a stigma that the wineries hate the breweries and vice versa,” says Ryti. “That couldn’t be further from the truth.”

While Refuge is employing Old World techniques, Electric Brewing Co. in Murrieta is a small-batch, electric-fired brewery specializing in a somewhat newer trend: hazy Northeast-style IPAs, the “haze craze,” if you will. 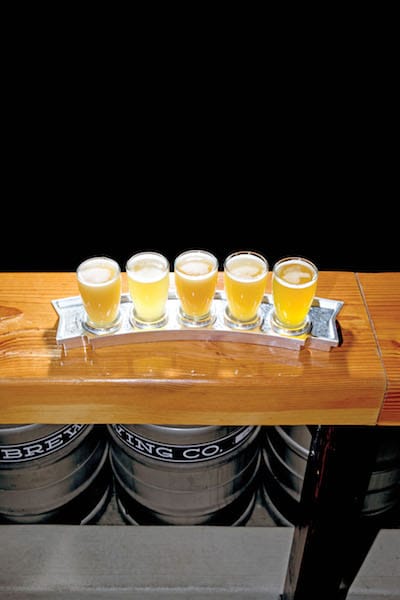 Named after how they’re powered and brew their beer, Electric Brewing, like most successful breweries, was founded by a homebrewer, Justen Foust, who started the homebrew club Murrieta Brew Lab. Together with his wife Shauna, who is the brewery’s chief operations officer, and his business partner, Jason Foster, he began construction on the brewery in August 2013.

Most U.S. craft breweries are gas fired, but the building that Foust had his eye on was originally set up as an electric repair shop. In the summers, amid Southern California Edison’s peak rates, Foust and his team brew during off-peak hours, beginning at 11 p.m. and brewing through the night and into the early morning hours.

“He saw this huge demand,” says Shauna. “These people go out there at 8 o’clock at night to wait for a beer release that isn’t happening until noon the next day, and he’s like ‘How do we do that? What’s so great about these beers?’ So he started with his research … and loved the style, loved the challenge.” 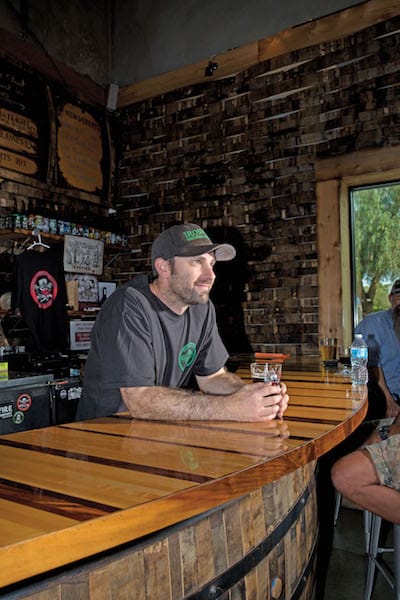 Ironfire president John Maino enjoys one of his brews behind the taproom bar.

The craft beer industry has more than 75 styles of beer and it seems that the Temecula breweries are brewing up as many of those styles as possible. Less than a mile away and less than one year old, Robert Durant is bringing English pub life to wine country.

Durant has been perfecting his technique for cask-conditioned ales. After retiring from the navy, he founded Inland Wharf Brewing Co., where he has retrofitted a commercial kegerator with a beer engine he obtained in England, dubbing it the “caskerator.” 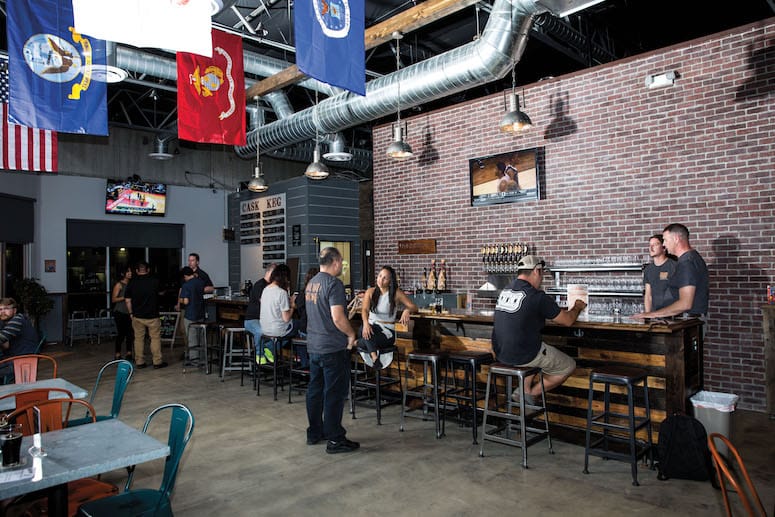 (Above and below) At Inland Wharf, shuffleboard, one of the major league sports of beer drinkers everywhere; the brewery’s roomy interior  of encourages its patrons to socialize; an English-style cask ale getting pulled at Inland Wharf. 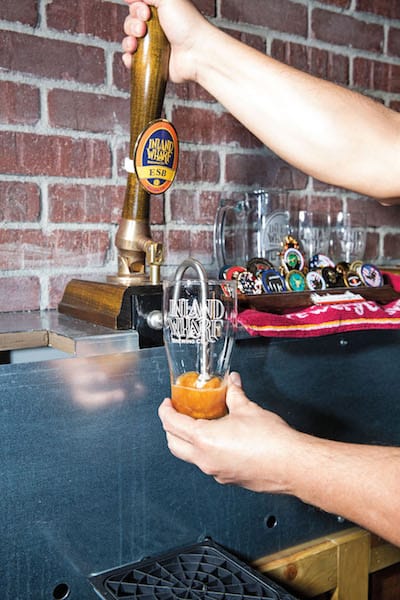 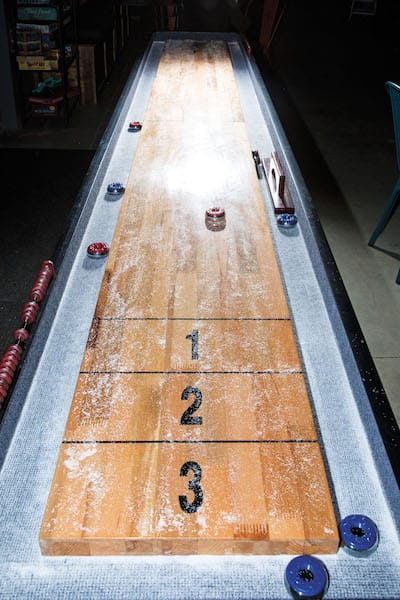 He developed a taste for beer at an early age and began brewing in college. Traveling the world with the navy and being stationed in beer-centric cities like Seattle and San Diego exposed Durant to many of the different craftbeer styles.

“I spent two weeks in South Hampton, England, back in 2002,” Durant says with a grin. “Every night we went out to the pub and we got to know the husband and wife who ran the pub… He took us all over to the pub and showed us where the beer came from and how it was dispensed.”

His current head brewer, Jared Williamson, was working at a brewery in Saint Paul, Minnesota, when he got a call from a friend at Refuge who told him of an opening at Inland Wharf. After several of those phone calls, Williamson and his wife were convinced and headed to California.

“We dry-hop each cask individually due to the way that it goes through its secondary fermentation. The hop aroma is there; however, it just showcases that malt so well,” says Wiliamson, who is 27 now and has been brewing on and off for about 11 years. Yeah, do that math. “I think our porter [Stormy Sky Porter] is a great example of that.”

Durant loves that pub ambiance. He loves the softness and the breadiness of the beer as it comes out of the firkin. Nevertheless, they won’t be a cask-only brewery, because you just can’t open a brewery in this market without an IPA.

If Maino and Webb have learned anything in the past five years, it’s to be nimble. “You can’t be married to beer styles,” says Maino.

When you walk into Inland Wharf, you immediately feel comfortable.

Ironfire Brewing opened in 2012 under the ownership of John Maino and Gregory Webb. The two met while brewing at Ballast Point Brewing Co., one of the San Diego craft beer pioneers. If Maino and Webb have learned anything in the past five years, it’s the importance of being nimble.

“You can’t be married to beer styles,” Maino says. “You have to just go with whatever the market wants. ’Cause five years ago, our flagships were very different than what they are today.”

Known primarily for IPAs and barrel-aged beers, Maino and Webb have their hands on a variety of barrels, including bourbon, Jack Daniel’s, rye whiskey, white wine, red wine, cognac, and 30-year-old rum barrels. They brew just about everything in the wide beer spectrum, including Mexican lagers, hazy IPAs, sours, and stouts. And they ship their creations as far away as China.

“In Chinese exports, it will be equal to what we’re selling into some of our distribution markets. They want a lot of beer and they want it soon,” Webb says.

The duo has partnered with chef Steve Brown for an ambitious project called The Shipping Yard. The 8,500-square-foot eatery, built in a shipping container, will include outdoor seating, a full bar, and a dog park. Brown has worked in fine dining kitchens in Palm Springs, Los Angeles, and San Diego.

“All of us opening at the same time really created a competitive atmosphere,” Maino says. “I think [it] made us all brew better beer. There was so much competition — real fast — that we all had to up our game.”