The Beauty of Night 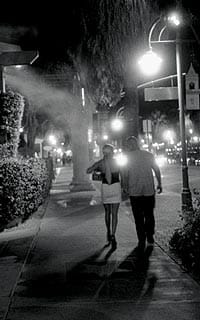 Palm Springs noir? You have to be kidding. Not according to renowned photographer Helen K. Garber. Film noir, the brooding, expressionistic style that became popular in the 1940s and ’50s — in movies such as The Maltese Falcon and Double Indemnity — is usually associated with the dark, wet streets, back alleys, and foreboding urban landscapes of big cities such as New York or Los Angeles — not a “fun in the sun” resort town like Palm Springs. Garber, who has shot noir series of photographs of New York City and Los Angeles, recently found the desert offers fertile ground for her work.

While attending Palm Springs Film Noir Festival last year, she was deeply impressed by the local architecture. “I said to myself, ‘What a neat little town,’” she says. So Garber took out the camera she always carries with her and began to prowl the streets of Palm Springs at night, capturing the town in a way that few have seen it.

Garber — who is married to Stuart Garber, a doctor of homeopathic medicine — has exhibited her work in galleries and museums all over the world and is included in permanent collections at Brooklyn Museum of Art, Portland Art Museum, and Museum of the City of New York. Her work spans from commercial photography to images of tourist destinations, dogs (her work has been included in A Thousand Hounds, a survey of the history of the dog in photography), and babies (her photographs illustrated the 1998 book Parents at Last).

She’s currently focusing on her Cities At Night series. “The project was inspired by the great photographer Brassai’s Paris By Night, German Expressionist film, and American film noir,” she says. “I enjoy everything about a city at night — more than I do during the day. There are fewer people out, and it is easier to move around. And the imagery is far more dramatic — lit signs, streaming headlights, and lit windows opening up silhouettes of interesting structures. Then there is the fear factor. I love the adrenaline when I have to be more alert and street smart.” However, she felt safe roaming the streets of Palm Springs at night.

Although she was interested in the arts from childhood, Garber did not always know she would become a photographer. Growing up in Brooklyn, she attended New Paltz College. “My parents would only let me go to a college within two hours of home, so there were few choices,” she says.

The choice was a turning point in her life. Her classmates included actors John Turturro and Michael Badalucco and playwright/ actress Charlyne Woodard. At the time, Garber was interested in art direction, set design, graphic design, and computer animation, as well as photography.

The message did not fully crystallize until 1960, when she was in her late 30s. Until then, she worked in graphic design and computer animation. She had pursued photography as an enthusiast until 1990, she shot  backstage at Le Cirque du Soleil. “Documenting the troupe profoundly impacted my life,” she says. “I realized then that to lead a fulfilled life you have to follow your passion.”

She calls it her “destiny” when she and her husband moved to California. Settling in Glendale, she worked as a commercial photographer until her images found their way into publications like The New York Times, Los Angeles Times, New York magazine, and Popular Photography.

She was free to unleash her passion.

Cities At Night has always lurked in her psyche, stemming from her love of jazz (a staple of film noir), 1930s Art Deco architecture, and her love of dark film. “At home as a teenager, I would watch the Million Dollar Movies on TV. My favorite directors were Alfred Hitchcock and Orson Welles.” In 2001, she read an article in The New York Times about hard-boiled detective author Raymond Chandler and started reading his work. “I was blown away by his images of L.A. and decided to try to capture his literary vision on film,” she says.

One interesting aspect of her noir work is that although she has an affinity for photographing people, humans blend anonymously into the city they inhabit.

“I think that started when I was learning rules for stock photography,” she says. “When I was a commercial photographer, I learned that if people weren’t recognizable, I wouldn’t need model releases. So, if they were moving through the shot, their faces would be blurred. My friend and one of my mentors, Larry Shapiro, showed me his night shots where he shook the camera. That made blurry, silhouetted people acceptable as good photography in my mind. Then I started to enjoy timing my snapping of the slow shutter to their movements for the design of the frame.”

The Garbers now live in Venice and might purchase a home in Idyllwild, which reminds her of places in upstate New York where she vacationed as a child. It is ironic that she would consider a move to our area, as she admits that when she first passed through the desert, she was “totally terrified.” “My image was of a place of fear and death,” she says, noting that after a visit to Joshua Tree National Park, she began to see it in a different light — as a place of space and freedom and life.

Now she has discovered another favorite desert destination — not one with big rocks, but modernist buildings and people and streets she so loves to prowl at night: Palm Springs!

It is perhaps not coincidental that Garber’s appreciation of Palm Springs coincides with the fact that her literary idol, Raymond Chandler, lived and wrote for a time in the Palm Springs area and that his last work, unfinished at the time of his death and later made into the noir cable movie Poodle Springs, took place here. Perhaps they shared the same vision.