The Dinah | The Best  of the Butch 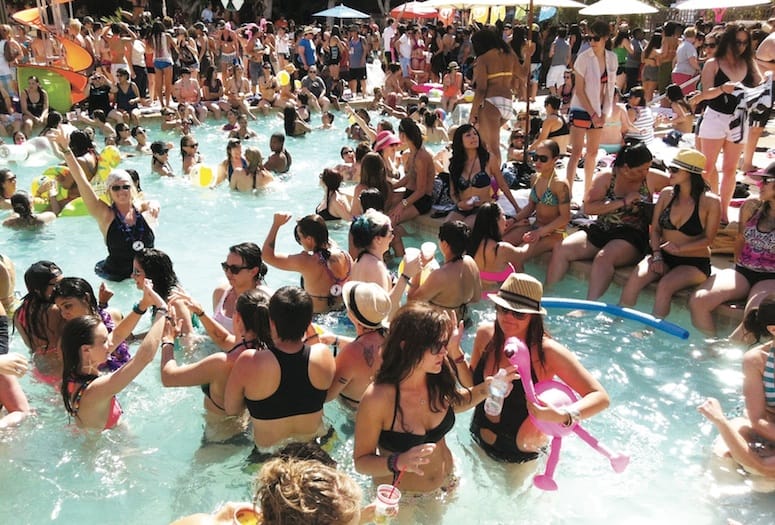 Dinah Shore was a gracious Southern woman who sang like a bird, loved Palm Springs, and adored the game of golf. In turn, the game honored her by naming a major LPGA event after her. Although the tournament no longer bears her name, her association with it lives on in the form of The Dinah, a wild and wildly popular three-day lesbian party that has nothing to do with golf. Or Dinah Shore.

Known for top-notch entertainment, the event this year features as its headliner actress Lea DeLaria. The Orange Is the New Black star, who wouldn’t filter her opinions for the pope, is also a stand-up comic and musician who’s refreshingly honest to some people and outrageously offensive to others. Our discussion with her was frank; sensitive readers beware. Fans will recognize Lea DeLaria from the show, Orange is the New Black.

“Are you gonna let all the men die out?” Pennsatucky asks incredulously.

On the series, Big Boo serves as the no-holds-barred, unapologetic voice of butchdom. In the real world, DeLaria serves much the same purpose, but admonishes that stereotyping lesbians is just as crass as doing so for any other demographic group. “You can’t tell a butch by its cover,” she’s known to say.

At 57, she’s well beyond the millennial age of most Dinah attendees. Still, she’s quick to note, people might be surprised to know that she “gets a lot of poontang.” One of the side benefits of her popularity on OITNB,  she says, is that she enjoys “much hotter babes now.”

As a comedian, DeLaria takes her job as social commentator seriously. From the moment she careened into acclaim on The Arsenio Hall Show in 1993 as the first openly lesbian comic to perform on late-night TV, DeLaria has been upsetting the Garden of Eden applecart, flaying whomever she considers sanctimonious Bible-thumpers with her acerbic wit and dismantling conservative religious dogma like a bull dyke in a china shop (accordingly, that’s the title of DeLaria’s 1992 comedy album).

Her recorded altercation with a proselytizing preacher on a New York subway in 2014 went viral in a matter of seconds; DeLaria walks like she talks, wherever that might be.

“I have had my mic cut, [I’ve had] audience walkouts. I’ve been officially censured by congress. But … If i offend you, then you probably needed it.”

“We do not have to be force-fed this man’s religious beliefs,” DeLaria announced to the crowd of onlookers. “Jesus never said for you to do this, ever — not anywhere in the Bible.” When the proselytizer blamed homosexuality for the country’s ills, DeLaria countered. “Religious fanatics are why America’s in trouble,” she said. “You are the reason America’s in trouble.”

DeLaria was alternately hailed as a paragon of LGBT pluck and vilified as a loudmouth, intimidating heathen, depending on the media source. So what else is new? The stand-up comedy circuit is not for wimps.

“I have had my mic cut, [I’ve had] audience walkouts. I’ve even been officially censured by Congress,” she says. “But as I have said many times, if I offend you, then you probably needed it.”

On Saturday, April 2, DeLaria brings her unadulterated humor and musical prowess to The Dinah, a coup for event promotor Mariah Hanson, who angled for DeLaria’s return. “She’s hotter than hot right now as Big Boo,” Hanson says. “Our audience is just going to eat her up.”

Being consumed by a pack of star-struck, libidinous millennials might be sweet retribution for DeLaria, who deftly eluded a rocky start to her first Dinah appearance decades ago.

“Way back in the early ’90s when the Macarena was popular, I joked about despising it — that if you play the Macarena backwards, you hear a voice say ‘I killed Selena,’” DeLaria recalls. “The entire audience started booing at what I felt was a beautifully crafted joke. I thought, ‘OK, gotta win them back.’ So I decided to sing.” DeLaria launched into an old 12-bar  blues song called “Do Right” popularized by the cult film Who Framed Roger Rabbit?, a cut that also appears on DeLaria’s fourth jazz album, The Live Smoke Sessions.

“The girls went crazy for it!” she remembers. “So I went from being hated to receiving a huge standing O in the middle of my set.”

DeLaria’s act often combines music and comedy in synergistic improvisation. “I have always been a natural comic and musician,” she says. “As a stand-up, I play the audience, listening to them and working with them. The same can be said for what I do with my [jazz] trio. We are having a musical conversation created in the moment.”

Music, she claims, is more difficult to execute well. “No one can teach you how to be funny, no matter what these failed comedians who give comedy classes at The Learning Annex say. It’s impossible, honey; you’re either funny or you’re not.”

But music, she says, “can be taught, and depending on your capacity to engage, as well as your determination to shed and rehearse, you can become a good musician. So real music takes way more discipline.”

Others disagree. “I think it’s more challenging to be a comic,” Hanson asserts. “If I book someone like Elle King [who performs Friday], everyone knows her song, she sings her song — it’s her song. The difference with comics is that their whole reception is based on their delivery and how they’re feeling that night. The same joke that got them tremendous laughs for 10 years can bomb if their energy isn’t right.”

What form of energy will DeLaria bring this year? She’s cagey, saying only that the girls can expect “everything I do — oh, and marionettes. Who doesn’t love a puppet show?”

Touted as the largest lesbian party in the world, the annual celebration of women who love women attracts a slew of celebrities and performances at various local venues. Some highlights:

THE WHITE PARTY: April 1, doors open at 8 p.m., Palm Springs Convention Center. (Not to be confused with the gay male festival of the same name.) Featuring Elle King in concert.