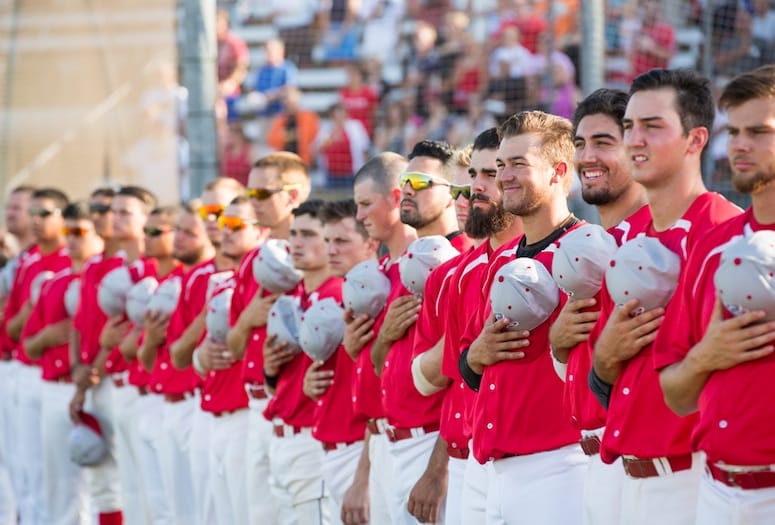 Players from the Palm Springs POWER line up for the playing of the National Anthem on July 4 at Palm Springs Stadium.
Photos by Tom Fowler

The San Francisco Seals's pitcher was looking a little red faced at the bottom of second, not surprising since at 6:30 p.m. the sun had not yet dipped behind the San Jacinto Mountains and the temperature on the mound was still easily in the triple digits.

It was also not surprising when his next pitch caught a Palm Spring POWER batter on the shoulder. Fans pack Palm Springs Stadium to cheer on the POWER.

What was surprising was that the play by play booth immediately blared Pat Benatar singing, Hit Me With Your Best Shot as the batter took first.

It was so corny and eye roll inducing that it was actually pretty funny.

The capacity crowd thought so, too. Fans sat outside Palm Springs Stadium during the game awaiting the fireworks to follow.

The July 4 game between the POWER and the Seals is a draw to be sure, but the fans filling the stands at Palm Springs Stadium, and those who blanketed Sunrise Park outside the gates were also here for one of the great Palm Springs traditions.

No, it had nothing to do with Modernism. Nope, not midcentury furnishings. No retro hipster Tiki parties or '64 Buick Skylark rallies. No one's here to see the new Louis Vuitton collection or raise millions for endangered horned toads. The crowd gathered for the same reason their fellow Americans gathered in Sherman, Texas and Hickory, Indiana and Fargo, North Dakota and Portsmouth, New Hampshire and Oxford, Mississippi.

Of course, it was great that the POWER pulled out the win late in the game, or that the hot dogs tasted almost exactly like they did when you were a kid. It was awesome that strangers shared blankets and beer out on the field when the fireworks started, and that the 'oohs and ahhs' for some of the more spectacular fireworks were nearly deafening themselves. It was hilarious the announcers were so silly and that the crowd loved singing along and clapping when prompted, and it was fun to see 8 year olds pounding their mitts and dreaming of shagging a foul. The POWER pulled out a 6-3 win over the San Francisco Seals.

On this particular night, Palm Springs was just like a thousand other small towns. It didn't matter what neighborhood you live in, what kind of car you drove or whether you got your flip flops at Trina Turks' or Walgreens.

It wasn't the Palm Springs of legend and lore. It was just our little town. Our community. Baseball is an American tradition on the 4th of July. Fans clamor onto the field at Palm Springs Stadium to gain a seat on the field to watch the fireworks. Fans take over the field. The color scheme looked more like Christmas than mid-summer. Looking in from the outside. A spectacular finish to the evening.