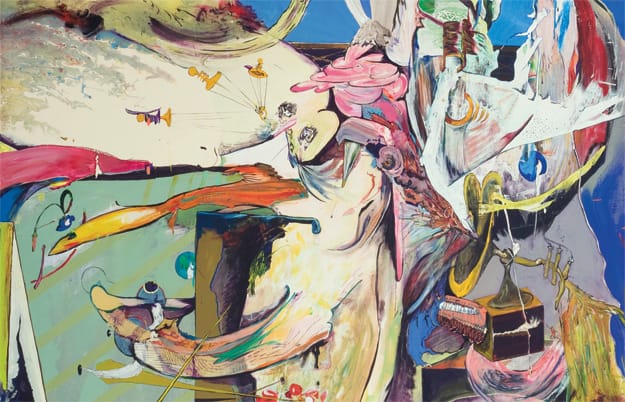 The Apple iPod was not quite what Hieronymus Bosch had in mind some 525 years ago when he painted The Seven Deadly Sins and the Four Last Things (c. 1485). But if the painter of fantastic religious and moral narratives could have seen Samuel T. Adams’ High Fidelity (2008), he might have given the young artist his hearty endorsement.

That is because High Fidelity may succeed where so many artists fail: showing us a way to transcend the follies of our time and emerge with a clearer perspective.

That might be optimistic, but this particular painting casts a nefarious shadow over technological hegemony, transforming Mac mice into menacing creatures perched and lurching on stilts.

“I’m interested in the absurdity, incoherence, and disobedience that can characterize our everyday experience,” Adams says. “The driving force behind my work is hard to pinpoint. Our mental constructs can’t always deal with what is being handed to us in life.”

“I make these paintings to better understand the relationships between seminal culture and historical references and my day-to-day observations,” he says. “[The paintings are] something familiar yet strikingly other. When I apply a large gesture with a brush, I don’t know exactly where the paint will land, but I have some sense of control with the materials.”

The control stems from his training in printmaking. After graduating in 2002 from Columbus College of Art and Design, he was a printmaker at Crown Point Press in San Francisco. Artist residencies and grad school landed him back east and freed him to expand his vocabulary. “When the Levee Breaks [2007] was when I first used a full stroke and palette,” he says, noting that the painting shares its name with a Led Zeppelin jam.

The painting, which comments on the apathy amid the chaos of post-Katrina New Orleans, was the harbinger of a muscular body of works on panel — paintings with tactile surfaces that retain the grit of Adams’ printmaking. “I like panel because you can cut into it and be physical with it,” he says. “I could dissect the skins of the paint, build up the
densities of the surface, and gouge back in.”

Adams painted the two newest works in the exhibition on linen, taking himself closer to the raw surface: no ink or acetate, only acrylic paint. “It’s more intuitive and incredibly liberating,” he says, adding that a “Cat in the Hat absurdity” trumps the “heroic entity” of his brushstroke. “I’m not shying away from the fine lines, and I can still achieve the surface quality and physical dimension. It’s been a gradual, radical change.”

Fervent observations and intellectual references permeate Adams’ paintings. “I don’t feel that any painting should have a fixed meaning,” he says. “I have my own ideas, but I want the viewer to finish the picture or reach the essence of what I’m saying in my own narrative.”

More interesting to Adams than how viewers read his paintings is the irony of using a static medium (painting) to describe anything in flux. “Everything is perpetually getting bigger and better and simultaneously scarier and more threatening,” he says. “This is the world I wish to depict: one of wicked mutation and hybridization. My plastic paintings are a stand-in for our surrounding reality.”