Andalusia at Coral Mountain, a resort community in the southern end of La Quinta 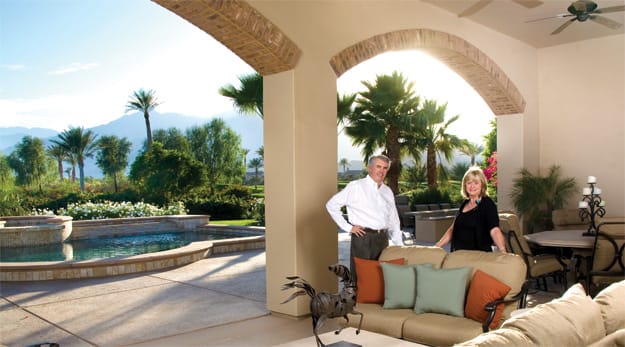 Dennis and Dorothy Holmes are enjoying their third season as homeowners in La Quinta. They are more active in the desert than at their home in Vancouver, thanks to the abundant sunshine and the multiple activities available at Andalusia.
PHOTOGRAPHY BY MARK DAVIDSON

VANCOUVER, B.C.: the largest city in western Canada; a sparkling metropolis refreshed by rivers and inlets; blossoming with conifers, maples, azaleas, magnolia, and even palm trees; nurturing one of the most ethnically diverse, culturally and technologically progressive populations in North America; and host of the 2010 Winter Olympics. This is the city from which Dorothy and Dennis Holmes and Joyce and Alan Lindsay have chosen to escape this winter.

Their retreat? Andalusia at Coral Mountain, a resort community in the southern end of La Quinta, where the desert still feels like a lush, mystical oasis, far from the sounds and rhythms of the city. The sun may shine on everyone, but it shines a lot more often in La Quinta than it does in Vancouver.

“We really have the best of both worlds,” Alan Lindsay says.

“We love the hustle and bustle of Vancouver,” Joyce says. “We take the ferry to the market. We Rollerblade. We have great fun there.”

But the lure of the desert region is powerful for many Canadians, who have traveled here for nearly as long as American movie stars, artists, naturalists, and wayfaring entrepreneurs. Always representing a significant portion of the Palm Springs “snowbird” or seasonal population, our northern neighbors have shown heightened interest in the area during recent years. Housing prices in Southern California are low, the Canadian dollar remains fairly strong, and blue skies still beckon visitors and part-time residents from beyond the border.

The Lindsays discovered Andalusia in March 2006. Alan, who grew up in South Africa, explains that he and Joyce had always wanted to spend part of their winters in an enjoyable, warm climate. “We traveled to Hawaii and South Africa for years, until my nephew said we should come look at this place called Andalusia near Palm Springs. When we got here, we were so impressed with the vision, the plans for the development’s future, that we decided immediately to buy a home here.”

Andalusia is a dreamy development inspired by the rich architecture and lifestyle of the Andalusian region on the southern coast of Spain. Spanish Andalusia resonates with breezes off the Mediterranean Sea. Treasured for its wine, music, bullfights, and gypsy dancers, Andalusia offers the same promise to Europeans that the desert offers to North Americans: warmth, sunlight, pleasure, and happiness.

“One thing we wanted was views forever,” Dorothy says, gesturing toward the spectacular vista from their plush great room. Through disappearing glass doors, across bountiful gardens and pool and sweeping views of golf course, she looks toward the mountains and endless blue sky.

“We’re more active down here than at home,” Dennis says. “We’re golfers, so the golf course is a big attraction.”

“And we swim and hike. We go to movies, we go shopping,” Dorothy adds. “The location is so serene and quiet, but we’re just a few minutes from Old Town La Quinta and El Paseo shops and restaurants. …When we come here, our kids always say that we’re going off to summer camp!”

Joyce has become an avid tennis player since the Lindsays bought their home here. She’s been guided by tennis pro Blake Wilcox, whom she credits for the skills and the passion that Andalusia’s tennis players enjoy.

“I can’t tell you enough good things about him,” she says. “He’s a great teacher, and he’s really good at creating an equal balance among players. And we have so much fun!”

In addition to tennis and golf, Andalusia’s amenities include a racquet club and fitness center, putting green and driving range, landscaped pool area, fine dining led by a world-class French chef, concierge services, and an exhilarating schedule of social events.

“There are book clubs, card clubs, hiking trips, theme parties, adventures into L.A. and San Diego,” Joyce says, as she slices a fresh Mexican lemon and rinses fresh mint leaves from her garden, rich with the scent of lemon, roses, rosemary, and sage.

After moving to the desert, the Lindsays and Holmes discovered that they knew each other through mutual friends and family in the Vancouver area. Like other Canadian residents, they have formed a deep friendship and socialize on both sides of the border.

One of the most attractive features of the Coachella Valley for Vancouver/desert residents is the ease of travel between their homes. The flight from Vancouver to Palm Springs lasts less than 2 1/2 hours. The convenience factor is huge for the Holmes and Lindsays, whose children and grandchildren visit frequently.

“That was very important to us,” Dorothy says. “It’s so easy to come here, and the
[Andalusia] community is very family friendly. They offer great programs for kids in tennis and golf. Our children love to spend time at the pool. There are tons of well-behaved, happy grandchildren around Andalusia at certain times of the year.”

“We asked all of our family members: Should we buy a home in Hawaii or at Andalusia in La Quinta?” Dennis remembers. “And they all said La Quinta.”