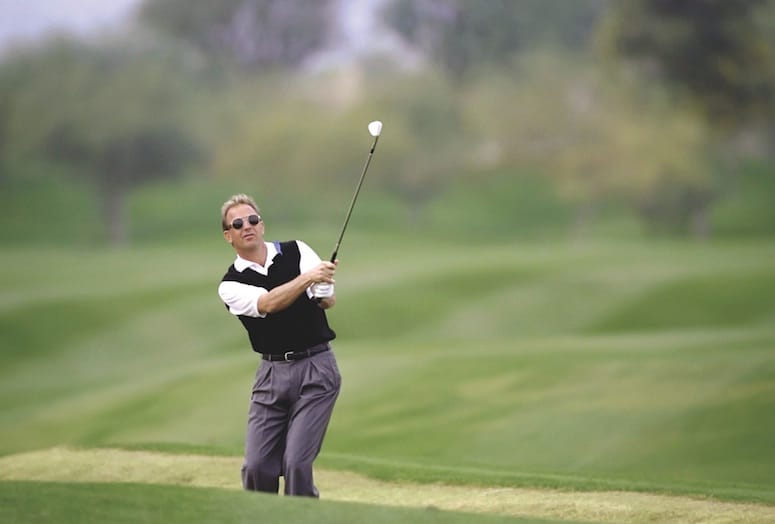 With his trademark bucket hat and upturned collared shirt, the veteran golf star Jim Colbert dresses like a man with an allergy to sunshine.

From the moment he first set foot in the valley to compete in the 1967 Bob Hope Desert Classic, Colbert knew that he could never return to the frigid winters he endured as a boy growing up in Kansas. They were bad for his career and worse for his constitution.

“There was no way I was going back to that kind of cold,’” Colbert says. “My motto became ‘West is best.’ The winter weather in Palm Springs is the finest you’ll find anywhere in the world.” In 1994, after a decades-long love affair with the valley, Colbert and his wife, Marcia, put their money where their hearts were and built a house at Bighorn Golf Club.  This where they now reside for several months every year.

Colbert says he never tires of the region’s balmy climate, boundless vistas or its relaxed rhythms.

The golf isn’t too shabby either.

Now 74, Colbert has played nearly every valley course of note, and he has favorite holes on all of them. Asked to narrow them down, he short-listed these six.

“I was paired with Kevin Costner in a pro-am one year when all the scores counted and there was some pretty serious prize money at stake. We played well enough that we had a three-or -four shot lead when we got to 17. It’s a reachable par five, but there are some pretty severe bunkers and a gully to carry, so it’s got some teeth. Costner split the fairway with his drive and asked me, ‘Well, pro, what next?’ I told him to lay up, which he did. It was the smart play, but the crowd started booing. It was around the time of Tin Cup, and they wanted Kevin to play aggressively like his character in the movie. We went on to win and I collected a nice check. But part of me felt bad. That was probably the first and only time Kevin Costner ever got booed, on the course or anywhere else.” Photo courtesy of the vintage club

“It’s just a little hole, but it’s so pretty it’s like playing in a postcard, with a beautiful water hazard you have to carry, mountains in the backdrop, and flowers blooming all around. I did commentary for ESPN one year when the seniors were playing there, and Lee Trevino gave me one of the all-time great quotes. He said, ‘Jim, you know what they water the fairways with here? Perrier.’ Looking at the 16th hole, you think, ‘Trevino might be right.’”

“There are a lot of great closing holes in the valley, but it’s tough to top this one, especially when we were playing it during the Hope Classic. The tee shot calls for you to hit a fade off a fairway bunker on the left, and if you pull that off, you can go for the green in two. But there’s water on the left and the mountain runs right up along the right, so it’s a narrow second shot with a lot of risk/reward. One year, in the tournament, I birdied it to shoot 28 on the back side, which was pretty good shooting. There are no guarantees here. You can make a three, but you could just as easily make a six.” “This is a great par three with a slightly downhill shot to a green with water running all the way up the left and behind it. It would be memorable on any day, but just this past April, I had an experience that really stood out. The tee shot was playing directly into the sun, and I hit a 23-degree hybrid and caught it flush. It seemed like the ball was headed right at the pin, but I lost it in the glare. I asked my caddie where it went. He said, ‘In the hole.’ That was my 19th hole-in-one, and somebody told me it put me one behind Nicklaus in career aces. Not long after, though, I got a message from my son. ‘Dad,’ he said, ‘Nicklaus is playing the par-three tournament at Augusta and he just made a hole-in-one.’ So now I guess I’m back to being two behind.” “A lot of people probably remember the ace Lee Trevino made on this hole in the Skins Game in 1987, but trust me, Lee made it look much easier than it is. They call this hole Alcatraz and for good reason. It’s an island green, with rocks all around it. There’s literally nowhere to miss. You throw in the wind, and it almost becomes like the 12th hole at Augusta. It’s do-or-die. You either hit the green or you’re dead.” “Modern technology has made a lot of classic designs play easier than they used to, but this seems about as demanding as ever. The hardest shot in golf is a long and straight one, and here you’ve got to do that twice. The way to play it is to try to fit your drive between a tree on the left and a fairway bunker on the right. Then you’ve got a pretty decent-sized second shot that plays uphill to a green guarded by deep bunkers. The last time I played this hole, I hit a good drive, but I still had a hybrid in. I hit my approach to about two feet and tapped in for a birdie, but I probably shouldn’t say that. I don’t want to give you the idea that that sort of thing happens all the time.”