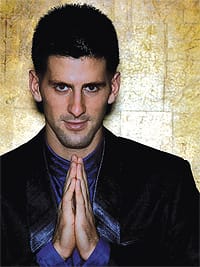 When Novak Djokovic arrived at the Pacific Life Open a year ago, he was ranked no.13 in the world. Although the tennis establishment was on to his crackling all-court game, he was only one in a large pack of youngsters armed with fine shots and possibilities.

But he tore through the field, winning five matches without the loss of a set to earn a spot in the finals of his first Tennis Masters Series event against world No. 2 Rafael Nadal.

“I was very happy with my performance in the desert,” Djokovic says. “It’s hot; the sun can really bake on the hard courts, and so you have to work very hard.”

Though he lost that final to Nadal, he clearly had taken a major leap. “What Djokovic did here gave him a big boost in confidence,” Tournament Director Charlie Pasarell says. “I knew about his talent for a long time, but was even more delighted he did so well at our tournament.”

Following his Indian Wells appearance, Djokovic caught fire. At the next event, the Masters tournament in Key Biscayne, Fla., he avenged his loss to Nadal and won the tournament. He went on to reach the semifinals at the French Open and Wimbledon, win another Masters event in Montreal (beating Andy Roddick, Nadal, and world No. 1-ranked Roger Federer), and proceed to the finals of the U.S. Open. By the end of the year, Djokovic had soared to No. 3 in the world and earned nearly $4 million in prize money. In January, he won the Australian Open, his first Grand Slam title, beating Federer and Jo-Wilfried Tsonga. “There’s no question,” John McEnroe says, “that he’s up there now with the world’s very best.”

The 20-year-old Serbian possesses a scintillating all-court game and lively personality. One of his many attributes is an exceptional retinue of impersonations of such peers as American No. 1 ranked Roddick, defending Pacific Life Open champion Nadal, and 2006 Pacific Life Open winner Maria Sharapova.

Often after victories, Djokovic tears off his shirt. According to Pasarell, “Indian Wells is a perfect stage for someone like Djokovic, who’s a great entertainer, to show off his tennis skills and his engaging personality.”

Sports and entertainment in the desert have long flowed together as seamlessly as martinis and cocktail umbrellas. For much of the 20th century, Palm Springs Racquet Club was center stage for visiting big-time tennis players like Jack Kramer and Pancho Gonzales, whose desert pals included screen legends such as John Huston and Charlton Heston. More recently, the tennis hot spot is the Indian Wells Tennis Garden, home to the Pacific Life Open (March 10-23).

“What’s good about Indian Wells is that people appreciate having fun with tennis,” Djokovic says. “In the States, tennis is something different. The Americans love the excitement and have a lot of fun and enjoy the stars. It’s always a special feeling and big pleasure to come here.”

The more than 300,000 fans pouring through the gates arrive with grand expectations. “It’s Hollywood’s Grand Slam,” Pasarell says. “We get a lot of people from the entertainment industry who come to watch the tournament religiously.”

Djokovic appreciates the isolation he has in Indian Wells. “You can focus and concentrate on the tournament,” he says. “You can relax and really think about what you came for. It’s all about tennis and focus and going step by step.”

It was that focus that had been the missing link in his game. Exceptionally ambitious (“It’s always been about being the very best,” he says), he often got down on himself, his temper triggering a decline in his play.

Tennis wasn’t supposed to be the sport where Djokovic made his mark. His father, Srdjan, was a world-class skier in the nation previously known as Yugoslavia. But while young Novak hit the slopes, there also happened to be three tennis courts in front of his family’s mountain resort pizzeria and pancake restaurant. “It was like destiny,” he says. When he was 9, his father told him he’d have to choose tennis or skiing. “I decided to play tennis,” Djokovic says, “and I don’t think it was a bad decision.”

His game is a harmonious mix of balance, feel, patience, and a superb ability to crank up his power when needed — perhaps a result of being taught to play by Jelena Gencid, a top player who also advised Goran Ivanisevic and Monica Seles. Often, female coaches such as the great Jimmy Connors’ mother Gloria, emphasize fundamentals and court sense over raw power.

But in war-torn Serbia, first-rate tennis facilities were unavailable. At the age of 12, Djokovic headed to Munich, where he honed his game under the tutelage of a former touring pro from Yugoslavia, Nikki Pilic. Though the time away from his family was hard for parents and child alike, it battle-tested Djokovic to the point where he is extremely self-reliant and comfortable with the demanding rigors of an individual sport contested on every continent. His game is more complete than most of his rivals’.

“He’s an all-court player,” Pasarell says. “He’s solid off the ground and can come to net. To have a shot against the world’s very best, you must able to play defense and offense. He’s got those skills.”

What makes Djokovic so entertaining is not just his brilliant tennis, but also the exceptional alertness he shows on the court. Though he has learned to temper his emotions, you can tell by watching him compete that he’s enjoying the cauldron of competition and is mindful of the odd bounces a ball can take.

But a Djokovic match also features its share of smiles and even occasional laughter. “He’s aware that this is a special kind of life he leads,” ESPN analyst Cliff Drysdale says.

“I’m very flattered that people come up to me and say nice things about me and my personality,” Djokovic says. “I had some performances on and off the court that people really love and respect. It’s nice to hear that people think I have a great personality and have fun on the court.”

Impersonations of other tennis players are yet another Djokovic distinction. He’s been doing them all his life, back to his childhood when he revered Pete Sampras. At last year’s U.S. Open, shortly after his quarterfinal victory, he thrilled the stadium crowd and a national TV audience with a full slate. Occasionally there have been rumblings that Djokovic’s antics irk his peers.

“Of course no one watched me do these when I was a kid,” Djokovic says. “Now people notice them, and with success comes fame. I’m not trying to offend anybody. I like to bring fun and enjoyment.”

If his rivals might be a tad envious, promoters such as Pasarell can’t get enough. “He’s a great asset to our sport,” he says. “A nice guy, a great player — [it’s] just a joy to see him making his way up. It’s hard to say a guy can be better than Federer or Nadal, but he’s a guy who could well do it.”