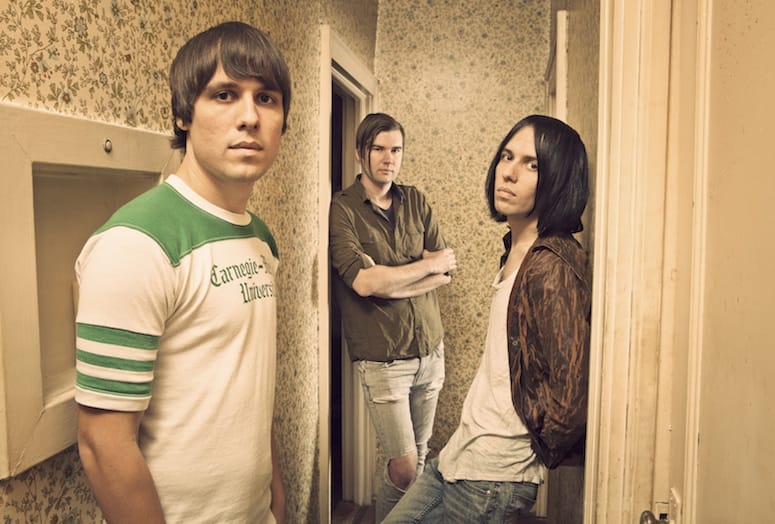 After playing Coachella in 2007, UK band The Cribs were hungry to return in 2010.

Mother Nature had other plans.

Sitting on the Tarmac at a UK airport, Gary Jarman and his two bandmate brothers, Ryan and Ross Jarman, reflected on their 2007 Coachella performance. It was the first time Gary had ever seen a Hummingbird floating about the desert landscape. The sweet memory faded after three long hours of waiting while they learned a volcanic eruption in Iceland shut down airports all over the world.

When their flight was eventually canceled, they strategized how they could get to the only flight leaving for California, but it was in Amsterdam. After plans to travel across the channel to get to the Danish country finally failed, the men admitted defeat.

Returning to Coachella this year, The Cribs are ready to take over the desert with tunes from their 120-song catalog and a new top UK charting album produced by Ric Ocasek (of The Cars). The Cribs' new album, For All My Sisters, was produced by Ric Ocasek from The Cars.

You’re a UK band, but you live in Portland?
"I have a recording space in the basement and my brothers come out and we record here.  We’re from England.  Doing well in the UK, it’s like being in a pressure cooker.  In America you can get by being an Indie band more easily.  In the UK you’re either an underground band or on the radio.  We had a Top 10 record in the UK this past week.  It’s a different reality."

Tell me about your new album, For All My Sisters?
"It just came out in March. We finished recording it last November. It was the longest between records, three years. We were away writing for a bit.

Ric Ocasek of The Cars produced?
"Yeah, he’s somebody we always wanted to make a record with. We always thought his sensibility would suit ours. He’s such a great pop [music] songsmith. He’s kind of a weird guy. The Cars weren’t typical pop song writers, and The Cribs, we write non-conventional pop songs, too."

How did the opportunity for Ric to produce happen?
"He’s one of those guys you have to pin down. Producing is not his primary [work]. He’s a renaissance kind of guy who has a lot going on all the time. Ryan is living there, hooked up with him and played [him] demos. He was really enthusiastic as a producer. It was a real boost to us. We were happy with the songs we were writing, but for somebody you really respect to want to be involved was incredible. Ric brought a really good vibe to things."

Is Ocasek’s influence noticeable on the record to you?
"The way I hear his influence is by pushing us to get really good performances. Ric really spurred me on to work really hard on the vocal performances. It’s very important to him. A few songs he suggested we put synth on them, something we normally wouldn’t do, and it worked really great. The Cars always had great synth lines in them."

You’ve also worked with Nirvana producer Steve Albini on a prior record?
"We did one session where we recorded four songs in three days. Recording with Steve is so quick. You go in with Steve and if you can play the song well, perform well, you’ve got a great record. That’s Steve ethic. He’s someone we enjoy working with."

How did you meet Johnny Marr of The Smiths?
"We met in Portland, which was weird since we lived so close in England. It was cool because he really liked The Cribs and we were Smiths fans growing up. I’m really good friends with Jeremiah Green, the drummer from Modest Mouse. I was at his house for a barbeque. Johnny came up and said, 'Hi.' Johnny’s a real gentleman. I was so flattered by that, we were like a house on fire right away."

How was it having him in your band two years?
"With The Cribs being a family band, us brothers, it was going to be weird to outsiders.  For us, it was great.  We all were very close and it was a happy time."