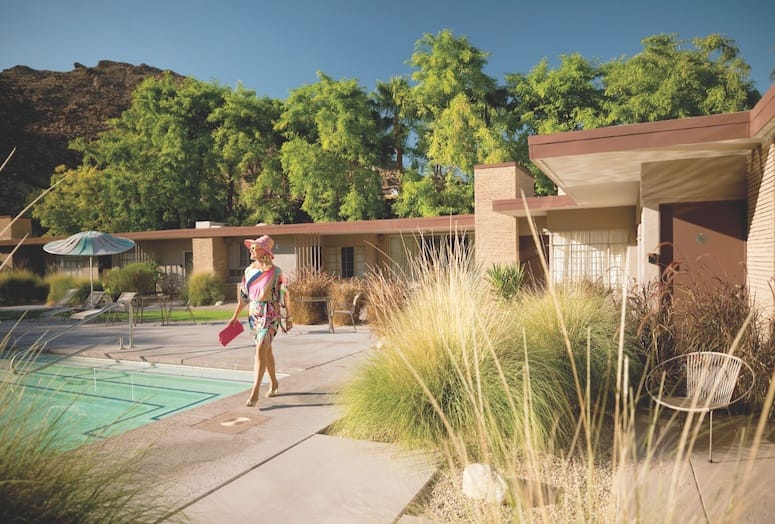 THE STYLE-MAKERS: Christy Eugenis strolls poolside at The Hideaway in Palm Springs. Eugenis and her husband, Stan Amy, created The Hideaway (1947) and Orbit In (1957), both designed by Herbert Burns. “Christy and Stan’s names kept coming up when I was doing research,” Schnepf says. “This image was taken when they still owned The Hideaway. Christy wore Trina Turk and a vintage hat. I chose this photo for the book because it just had an attitude to it. The light, late in the day as it streaks across the pool, is just classic Palm Springs. The Hideaway is so period-perfect.”
Photos by James Schnepf “Palm Springs is like no other place I’ve been to,” says Wisconsin-born photographer James Schnepf. “When I first came here, I reconnected with a vibe I had not felt in a long, long time — something from my youth; it was a very uplifting, optimistic time. That same sort of attitude is happening here in the community with the midcentury modern enthusiasts that are responsible for the architecture coming back so wonderfully.”

Schnepf has traveled the world photographing for major magazines and corporations but was drawn to capturing images of the local lifestyle after he and his wife bought a 1959 William Krisel–designed home in Palm Desert five years ago. THE PRESERVATIONISTS: Kim and Joe Zakowski, founding members of the Palm Springs Art Museum Architecture and Design Center, were photographed standing in the pool at their former home at Racquet Club Garden Villas, designed by William F. Cody in 1960. “They called this home the ‘Baby Cody,’ because it was on the small side; they loved it. They bought the home at the urging of the late Cody expert Patrick McGrew. The Zakowskis really go the extra mile in helping the community preserve significant properties for the future. And aside from being excellent preservationists, they have a great sense of humor, which often led to quirky, whimsical photographs from our sessions.”

“I’d always photographed personal projects throughout my career,” he says. “When we got out here in 2010, a whole new world was exposed to me. Growing up in the Midwest, it is the furthest thing from a California desert and midcentury modern experience. I started photographing to get a feel for the place.” THE DESIGN PIONEER: “I wanted to document the last midcentury architects that are still with us,” Schnepf says of this image showing architect Donald Wexler at the Krizman House (2004) in Palm Springs. “They were top of my list. I had several great options for locations; I thought it was interesting to photograph Donald Wexler at the last design project from his practice, the Krizman House.”

“It certainly didn’t start out as a book project; it started out as a personal portfolio project — something to play with,” Schnepf says. “My list of subjects started to grow quickly, and it really snowballed. I wanted to find out who the people were who were responsible for the rebirth of midcentury modern architecture and the lifestyle in Palm Springs.”

Palm Springs Modern Living is available at bookstores and on Amazon.com. A custom box set and images are on display in the Bradford W. Bates Vault: The Museum Design Store at the Palm Springs Art Museum Architecture and Design Center. THE MODERN VISIONARY: Architect Hugh Kaptur stands in front of the Palm Springs Golf Course Clubhouse, which he designed in 1967. “My time with Hugh Kaptur began with an hour-long phone call,” Schnepf says. “When I came to Palm Springs to shoot him, he also spent three hours with me showing me all of his projects. Practically every photo shoot in the book included an introductory scouting session, where we would meet, observe, and check light; that’s how I was able to formulate in my mind how I wanted to approach photographing the subjects. Then I went back to actually do the photography.” THE SHOWBIZ TEAM:  Award-winning architectural and film set designer Michael Johnston dives into the pool as his husband, Tony Award–winning lyricist David Zippel, works on his laptop. The couple own the William F. Cody–designed Palm Springs Glass House (1967). “This is one of my favorite photographs from the book,” Schnepf says. “I’d heard so much about this house, but I never got tired of the perfectly clean lines of the home. Michael and David just went on with their day as I photographed them. This frame captures a decisive moment as Michael enters the water.” THE PINK LADIES:  Of these pink- and white-clad golfers at the John Elgin Woolf–designed Marrakesh Country Club (1968) in Palm Desert, Schnepf notes: “Every Thursday at 11 a.m., the club holds a putting contest. Many of the women at Marrakesh come out in pink, wearing aprons holding their scorecards, and they have a pretty serious contest. I took this photograph from the rooftop of the clubhouse — it was rather precarious — and I waited out two sessions to capture just the right composition.”