Palm Springs art | The Dance of the Sculptor 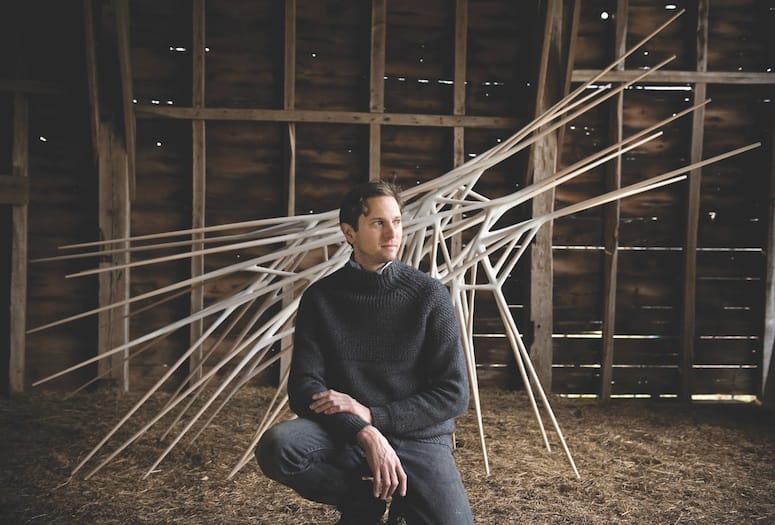 Suspended in the atrium of Imago Galleries, The Gloaming — a hand-carved basswood sculpture by Christopher Kurtz — reads like a drawing, with its pointy limbs jutting gracefully into space. Stretching between 6 and 8 feet, the work appears weightless, like a frozen starburst.

“In classical ballet,” says the 40-year-old Kurtz, who works without music to avoid distractions, “there is a gesture called ‘allongé,’ meaning to draw out, or to elongate. In this position, the dancer’s arm is fully extended — outstretched as long as the dancer can reach — continuing the line of the arm, through the fingers, and further out into space. I love the thought of reaching beyond what is physically possible and making it look convincing. This is a beautiful thought, and I try to carry this notion through into the objects I make.”

Imago installed the elegant sculpture at its Palm Desert gallery as Kurtz, who lives and works in upstate New York, expands his repertoire to include handcrafted furniture and stirs up the age-old debate between fine art and craft.

Palm Springs Life checked in with the Missouri native to discuss his vision and his practice, and to put the art-versus-design argument to rest. What triggered the leap into designing and making furniture?
I’m trained as a sculptor. That is my background and how I engage the world. I love furniture, and the logic that furniture follows, so it was inevitable that the two practices would cross in my studio.

How did you settle on wood as your medium, and what about the material keeps you engaged?
I love the versatility of wood. You can build with it and use it as a structural material — or you can carve it, slowly subtracting its layers to the point of it almost being a painterly process. I have a tendency to build like an engineer and then carve the built structures like a sculptor. In every case, wood is a material that has a strong personality; it’s organic and alive.

Do you use different varieties?
My choice of wood species is almost entirely functional. Softer woods are better for carving. Fruitwoods are great for furniture. Ash and white oak are great for bending. I try to let the function of the piece be a big part of the way it also looks.

A reductive, or minimal, aesthetic seems to be the common denominator between the furnishings and the sculpture.
Again, the aesthetic is driven by the function. In furniture, the function is pretty clear. For example, a chair is to sit in and it must hold your weight and be comfortable. Sculpture has to stand up and defy gravity in some ways. Anything that does not support these goals tends to get peeled back and stripped away. I suppose that makes the initial read of the work seem reductive or minimal, but there is actually a lot going on.

Art versus craft: Does making furniture affect how the art world embraces your sculpture?
This is a debate that people love to have. It is an interesting conversation, but now more than ever galleries, museums, curators, collectors, and the press are presenting art, craft, and design on a more even platform. I don’t think artists and craftspeople — at least the ones I know — ever much cared about the definitions and hierarchies. Makers are primarily interested in making something good.

In recent years, a new generation of collectors and curators has realized there are untapped markets of craft, design, and contemporary decorative arts. Fairs like Design Miami/Basel are as star-studded as the art counterparts. So younger collectors can acquire blue-chip art and significant pieces of craft and design for a lot less money. Likewise, young curators are rediscovering under-recognized craftspeople and launching huge surveys of their work. For better or worse, this “market making” is beginning to close the gap a little between art, craft, and design.

Can you talk about the influence of Martin Puryear, the artist known for his devotion to craft?
Martin is a giant, and I have been greatly influenced by him. When I was just out of art school, I had the privilege of working closely with him as his studio assistant for five years. We have remained close friends ever since. He is among the most decent human beings I have ever met.

How often do you visit the desert, and how does it affect your work?
Not as often as I’d like to, but I find the desert infinitely inspiring. I lived in the desert high plains in New Mexico for a year, and it changed the way I think about scale and space in my work. I have the same feeling of inspiration every time I come to the Palm Desert area. Where I live in the Hudson Valley is lush with vegetation and mountains. It’s such a contrast to the desert landscape. When I visit the desert, it is exotic to me, and it resets my brain. I love Joshua Tree. I also love the highway. Driving in the desert is one of my favorite things in the world.