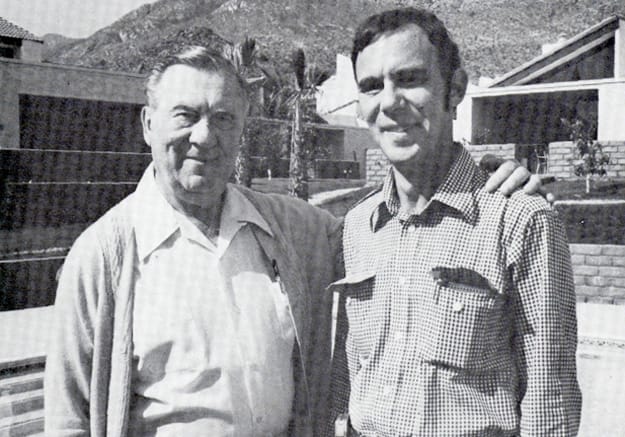 Building is a family affair with Roy Fey and his son Robert, well-known for their innovative south end projects.
Palm Springs Life Archives

Roy and Bob Fey: When It Began….

When Roy Fey moved his family to Palm Springs from Chicago in 1956, he intended to finish construction of the Desert Skies Hotel and then move on to other interests. Today, almost 25 years later, Fey has become a veritable institution in the desert and one of the best-known builders around.

The name Fey and the south end are almost synonymous in Palm Springs. Developments such as Canyon View Estates, Canyon Apartments, Canyon West Estates and Canyon Vistas Estates are all projects built by Fey.

In 1962 Roy Fey was the first person to introduce the concept of condominium building into the area by converting Desert Skies. At the time, condominiums were such rare beasts that there were no state statutes nor laws governing such a conversion. Fey even had to draw up his own documents and forms.

"When I went to the city to file the forms, the officials said, 'What are you talking about? Condominium? How do you spell it?' There was a big article on the front page of the newspaper shortly after that read 'ROY FEY RAPES LAND' because we altered the density ratio by taking what was normally three to the acre and making it five to the acre."

Fey also was the first to build "executive homes" — a concept that provided all the privacy of a large home with all the facilities normally found in a condominium complex.

The Feys currently are involved in construction, general real estate, marketing, consulting and apartment conversions. Up until this year, they averaged 75 units per year with a policy of starting about 40 new units every six months.

"Last year," says Robert Fey, "seeing the economic situation and tight money coming, as well as the city's short-lived moratorium, we decided to compress two years of activity into one year."

Roy adds: "Up to the present date, we've sold everything and we're not building until we see what's happening in the desert."

Most of their activity now is in resales of their own product at a choice interest rate of 10-3/4 percent assumable and they're finding these homes are moving quickly.

"Some people built Volkswagons," says Roy "and we build anything from an Oldsmobile to a Cadillac. I don't think you can cover both ends of the scale."

Bob, who pours over market research statistics "as a hobby," finds that, contrary to what many people predict in the housing market, prices are going up at an increasing rate.

"Right now, we're running 26 or 28 percent over last year in price although the total unit volume is down. In December it was 19 percent, in January 21 percent and in February 23 percent."

What do they see for the future of the area? A doubling in population with a revitalized housing market perhaps as early as 1981. Planned unit developments and condominiums with few single homes. A difficulty providing badly-needed, low-cost housing with the exception perhaps of mobile homes placed on slabs. And a great spurt of interest in the new idea of timesharing, a concept popular in Florida, Mexico, Colorado and other areas.

Perhaps with "the Fey Factor" tradition in pioneering, they'll be among the first to try it in the desert.