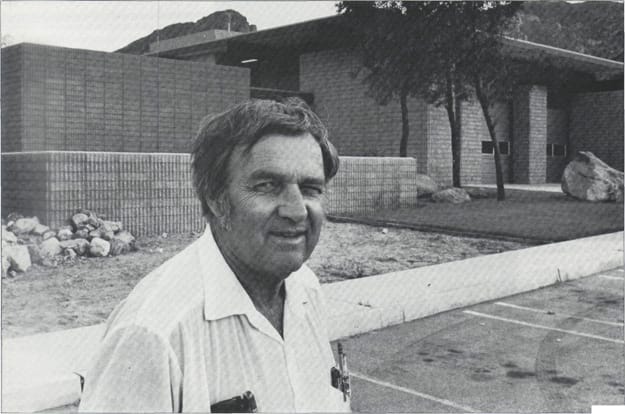 There's a strong rush of nostalgia in Walt Colglazier's John Wayne-drawl as he talks about the desert in 1937 — the year his father, who was a general contractor, brought the family to Cathedral City. It seemed like a good spot: his grandparents wanted to build a couple of rentals and the family had relatives who had survived the depression very well here.

"In 1937 you could ride your bicycle to Palm Springs on a two-lane road and not get run over. And in the summertime, when almost everyone left, it was considerably cooler than it is now. Almost no humidity."
Ironically, Colglazier has been one of the "old-time" desert builders responsible for changing the sleepy desert communities into what they are today. When his father arrived, there were perhaps a half dozen contractors; today a rough estimate places the number at 200 to 300.

Although he occasionally takes on a contract to build a project like the Rancho Mirage Fire Station or one of the better-quality homes, the major percentage of Colglazier's work is in remodeling, additions and maintenance. The company averages one to one and a half million dollars per year. Because of his emphasis on quality work, Colglazier has become so well known in this area that he doesn't even advertise in the phone book anymore. "I always say, build a better mousetrap and catch them that way," he says with a chuckle.

How will the current building slowdown affect his business? "As new construction stops, there'll be more people available to do our job — more people will get into additions and remodeling."

He already finds that he has more access to sub-contractors whereas three months ago it was difficult to get a spread of quotes. "As the subs run out of work, they're beginning to look at projects they considered too small a while ago. I'm noticing that we have more jobs, but they tend to run smaller in size. There are no large, major remodels like last year."

For his business it also means that people in the low-to-moderate income bracket will not be able to afford remodeling work and the people who could afford major alterations in other years will hold off. This means more work in the $5,000 range, which is the bottom of the scale, and less in the $300,000 top end.

Colglazier's view of the current building slump is pessimistic: "If we continue with the steps the government has taken so far, we're going to come to a complete collapse. Financing is one of the keys to construction and if it's not economically available, only large concerns will survive. They're the only ones who can think about handling money at these rates. The little builder can't. The little home owner can't." Many, he believes, will simply declare bankruptcy or quit.

Colglazier has put a lot of years into the area and still averages a 10-to-ll-hour day on the job. He lives in Cathedral City, "up on the hill" near his office — a spot six blocks from where he was 40 years ago. The shelves in his office spill over with affectionate mementos of years of dealings with desert friends. Would he ever leave?

"Maybe. If I wanted to retire I might go where there was a river and mountains to do a little boating and fishing."

But as long as the valley continues to develop and the weather and the beauty of the desert remain as it is, Walt Colglazier will continue right along "building a better mousetrap."