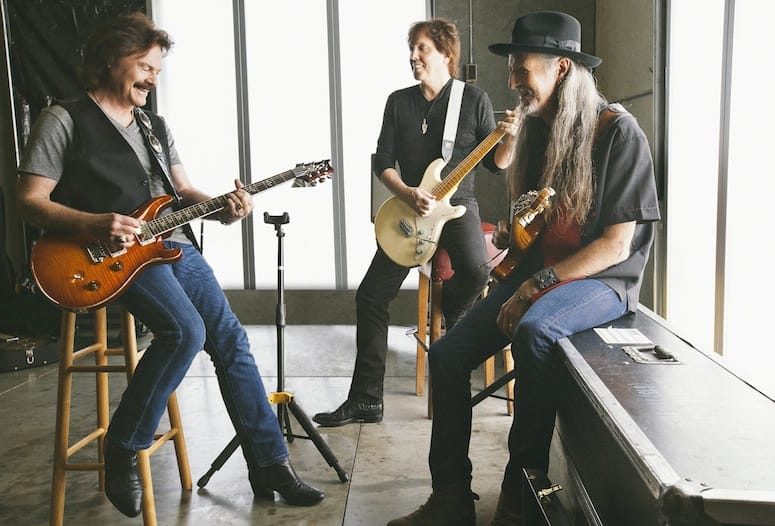 Musicians are often quite honored when they garner the respect of their peers, and founding Doobie Brothers guitarist/vocalist Patrick Simmons is no exception.

“I’m humbled in so many respects by the number of talented musicians we worked with on Southbound,” he says of the album the band released at the tail end of 2014. Southbound is a rousing, collaborative reimaging of 12 Doobies classics featuring artists like the Zac Brown Band picking and grinning their way through Black Water, Blake Shelton and Hunter Hayes totally nailing Listen to the Music, Brad Paisley jamming hard on Rockin’ Down the Highway, and Sara Evans putting a deft female spin on What a Fool Believes.

The Doobie Brothers will play all these tracks and more June 12 at The Show at the Agua Caliente Resort Casino Spa in Rancho Mirage.

Simmons, who has authored and sung such perennial Doobies cuts like the aforementioned Black Water (the band’s first No. 1 single, from 1974), Clear as the Driven Snow, and South City Midnight Lady, is beyond stoked by the reception Southbound received.

“For me, it was one of the cooler experiences of my life,” he marvels. “It’s unbelievable to have such iconic artists singing your tunes, and it’s something I’ll always remember and treasure. To have something like this turn out better than you imagined just adds to your legacy. People listening to this album 50 years from now will go, ‘Wow, this is as good as anything they ever did!’”

While Simmons was on a short tour break in Hawaii, he took some time to discuss his lifelong connection with California, the songs that initially inspired him as a kid, and what fans can expect to see and hear during The Doobies’ set at The Show. And all you have to do is — of course — listen to the music.

What do you like about the Palm Springs area? I know you’ve visited a number of times over the years.
“I’ve got some friends down there, so I always look forward to reuniting with them. I grew up in California [in San Jose and Santa Cruz], and my heart is still there. My wife and I get out there several times a year. I’ve still got a place up in Northern California, but I travel the whole state.

“Being into motorcycling and old bikes, I have a lot of friends who are desert racers. Not that I’ve done that much of it myself, but I love the sport and the people who do it. I’ve got a lot of buddies who still go out and do enduro racing, and all that stuff. [Simmons and his wife, Cris Sommer Simmons, are longtime vintage Harley-Davidson enthusiasts, and they have both participated in Cannonball Endurance Runs.]" The June 12 show will include songs from their earlier albums.

I know you love spending time in Hawaii, but California has its own special pull, wouldn’t you agree?
“Yes. It’s always great to be in California. There’s something about the West Coast and that whole California lifestyle. I’ve lived there almost all my life, and I still feel a close bond with everything out there. And we always have a good time when we’re down there in Southern California. They’re great audiences. I’m really looking forward to it.”

What can folks expect from the show they’re going to see at The Show?
“We’ll do a little bit of everything. We play a lot of songs from almost every album. We’re actually doing more acoustic stuff now. We did a show in Nashville recently for Music City Roots [on May 13, live from The Factory] where we did songs we hadn’t performed in years, and we even played some we had never done before. We’ve incorporated some of that stuff into our regular set, just because we had so much fun doing it.

“We still keep changing things around all the time, but we always throw in the songs we know people want to hear. But then we pepper the show with some oddball deep cuts that many of our fans probably have never even heard before — not live anyway; they may have heard them on the albums.

“What’s also kind of cool is we’ve gone back and are doing some songs from our very first album. Most people probably have never even heard of it.”

You mean the self-titled album with that nice black-and-white photo of you guys on the front and back [The Doobie Brothers, released in 1971]?
“Exactly! We’ve been doing some songs from that one recently, experimenting a little bit.”

Is Nobody one of the songs you do from that album?
“We did that recently, yes. I’m not sure if that one will still be part of our set [at The Show], though. We’ve also been doing another one from that album called Slippery St. Paul, so we’ll see what we get into. We actually keep adding songs to the set, so it keeps on getting longer and longer! (chuckles) If the promoters let us play longer, we’ll add more tunes for all the people who come see us.”

Speaking of vintage records — what was the first one you got as a kid that you would say had an impact on you?
“Oh, that’s a good question! I always remember Bill Haley and His Comets, See You Later, Alligator [released in February 1956]. That was probably the first thing I got really excited about — not the only thing, but that was one of the biggest and most exciting things for me. I don’t know why, but I love the guitar playing on that one. The song was such a novelty tune: “See you later, alligator/after a while, crocodile.” But at the time, I thought it was the greatest song of all time!”

Would you say that song got you on the path of playing music yourself?
“I was already playing guitar at that point. There were so many great songs I was inspired by. I had a lot of 45s back then: The Everly Brothers’ Bye Bye Love, Chuck Berry’s Maybellene, Little Richard’s Tutti Frutti.”

That’s not a bad group of songs to use for inspiration. Do you still have any of those original 45s?
“Nah, they’re long gone.”

Do you have a big record collection?
“I do have a pretty good vinyl collection. I’m probably more into vinyl than anything these days, to be honest with you.”

I love the fact we’re now getting reissues of The Doobie Brothers catalog on 180-gram vinyl. I’d sure love to see a Doobies vinyl box set one day.
“There you go! (chuckles). There’s a lot of new stuff coming out too. And if you go to used record stores, there’s always some Doobie Brothers records in the bins there somewhere.”