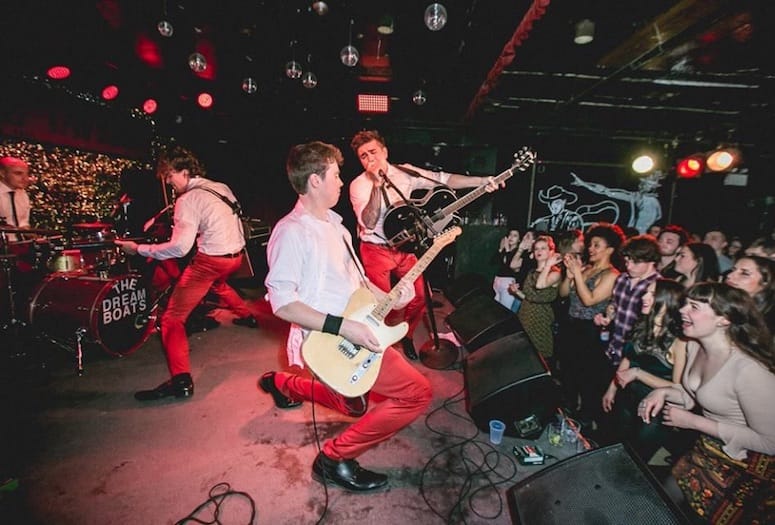 The Dreamboats will perform daily during Modernism Week at CAMP, Feb. 15-22 except Feb. 17.
PHOTOGRAPHS COURTESY THE DREAMBOATS

Every fairy tale has an origin story. The one about the rock ’n’ rollers known as The Dreamboats and how the slick quartet managed to become a recurring entertainment highlight at Modernism Week certainly warrants a look-see.

Once upon a time in 2015, performers Johnny G. Wiz, Ritchie Hummins, Bryan Lewis, and Matt Best were tearing up the stage at a hip venue in the Canadian city of Mississauga, the largest outpost neighboring Toronto on Lake Ontario. Performing songs with a decidedly 1950s and ’60s modern twist kept the audience invested and watching them in awe was Mike Hetherman, the CEO of Willis, the North American distributor of world-class building materials, including Corian solid surfaces. Hetherman and his wife split their time between Palm Springs and Mississauga. Corian happened to also be a Modernism Week sponsor.

“Some time after the performance, Mike said he wanted to get us down to California; that his company sponsored an event down there,” recalls Wiz, drummer and vocalist of The Dreamboats. “We thought, sure, how many times have we heard that before? But he followed through and we got to Modernism Week and it really helped us grow as a band.”

• READ NEXT: The Dreamboats'  Video Pays Homage to Palm Springs.

That was in February of 2017. It was the Dreamboats’ first jaunt to Palm Springs and the first time the quartet ever performed in America. This year marks the group’s fourth outing at Modernism Week, where they will perform during a robust daily happy hour from Feb. 15-22 (with the exception of Feb. 17) at CAMP, the event’s Community and Meeting Place. 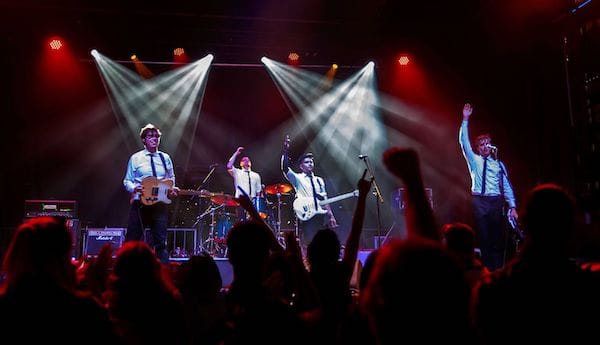 Since 2015, The Dreamboats have found a growing audience at Modernism Week.

“After the opening party went really well that first year, we were invited back to Modernism Week and apparently we were the first band to be asked back in 11 years,” says Hummins, guitarist and lead vocalist. “I love that we can still remain affiliated with Modernism Week as a band.”

At first glance, that affiliation seems like a no-brainer. Besides the obvious — the young men certainly know how to wear modern threads well — the group’s sound has real spunk with rock ‘n’ roll hints of Chuck Berry, Little Richard, and The Wonders from the Tom Hanks film, That Thing You Do.

“I think it works so well for us in Palm Springs and at Modernism Week because the area is like a time capsule of an era, music, and culture that we really drive a lot of our inspiration from as a band,” says Lewis, guitarist and lead vocalist. “In Palm Springs, everything is so well preserved and done with a modern twist, but there’s some modern thinking involved with it, too. I think that’s what also works for us creatively as a band. We’re really drawing inspiration from this retro music from the ’50s and ’60s, and we give it a fresh sound.”

Last year, the group returned to Palm Springs to film a music video in the Canyon View Estates area, giving palm tree-lined streets and midcentury modern homes in the cul-de-sacs top billing alongside them. In between, they took a liking to the modern vibe at Arrive Palm Springs and the Uptown Design District.

As for what the fellas love most about performing, their responses hearken back to performers of yore.
“There’s a lot of day-to-day work in a band, but it’s all worth it to get on stage and perform together,” Wiz says. “When we get to work and rock out on stage, it’s pleasure rock for me.”

“For me, it’s a great release and I love seeing how people react to us as we move through various songs,” adds Best, vocalist and lead guitarist.

Hummins notes that the creative pressure always brings out the best in himself. “When I have an audience in front of me, it pushes me be the best person I can be. I like feeling that pressure to deliver and being in the position to be able to do so.”

Lewis draws on his love for the music. “I love writing and playing music —period,” he says. “I think we all need those moments in life when you get to live in the present moment and performing really allows me to do that, especially at Modernism Week.” 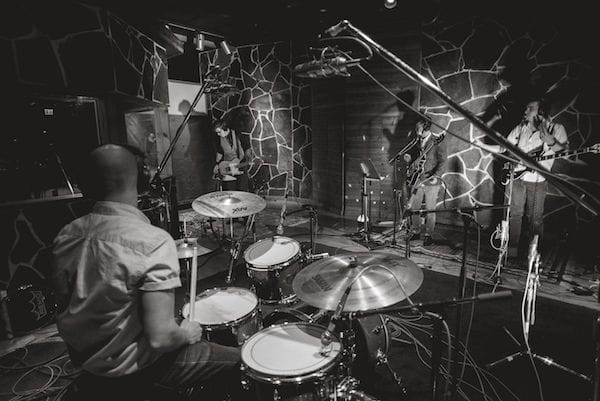 The Dreamboats in the recording studio in Ontario, Canada.