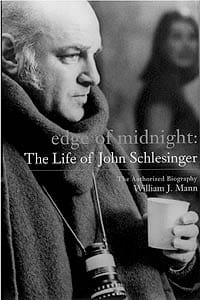 Ghosts have long pervaded the nonfiction work of local author William J. Mann. In both of his previous books centering on the history of gay life in early Hollywood — Wisecracker: The Life and Times of William Haines and Behind The Screen: How Gays and Lesbians Shaped Hollywood 1910-1969 — Mann delved into a past not so much forgotten as ignored. In the process, he awakened the lives and the stories of men and women whose careers helped shape American cinema, but whose sexual orientation may not have always allowed for proper recognition.

Yet, it is Mann’s stunning new biography of the late director John Schlesinger, Edge of Midnight: The Life of John Schlesinger, that stands as the author’s most haunting work — not because of the drama of the director’s life, but because of the depth of emotion Mann conveys throughout. Edge of Midnight is a love story between a man and his films, but also a love story between two men, each with their own heartbreaking endings. Given unparalleled access to Schlesinger and his friends during the writing of the book, Mann came to understand the famed director in a way few have in print.

“When I met John, he was already quite ill,” Mann says. “But the man I knew, the man I met, was still as inspiring and as alive as anybody I’ve ever known. I really felt that those last years of John’s life needed to be integrated into his story.” What those last years showed was a lion in repose in Palm Springs, his life under the watchful care of his longtime partner, Michael Childers. Mann deals with the peaks and valleys of their relationship nearly as intricately as he deals with Schlesinger’s career in film, one marked by such notable successes as Midnight Cowboy and The Marathon Man and tragic missteps like the Madonna vehicle The Next Best Thing.

“The very first day I met John, I said, ‘I’m not here to ghost write. I’m not writing a vanity piece. I’m going to talk about the clunkers and bad things, too,” Mann recalls. “And both John and Michael agreed. They wanted this book to be a critical analysis of John’s career and life.”

Dealing with Schlesinger’s homosexuality — a fact never hidden from the public — was also a compelling issue.

“John was pretty out all along,” Mann says. “He never did the Tony Richardson thing of getting married, never showed up with a woman to a premiere. John made Sunday Bloody Sunday, which he called a personal statement at the time, and it’s the story of a man in love with another man. So his homosexuality never hurt his career, but he was certainly worried when he was making Midnight Cowboy. He thought, ‘How far should I go with this? What if the crew finds out? Are they going to be upset with me?’ And Jerry Hellman [producer of Midnight Cowboy] said, basically, screw them.”

Mann — whose latest novel, All American Boy, was just released as well — plays a distinct role in the story of Schlesinger’s life, not only chronicling his past, dredging up those old ghosts as it were, but also as a reliable narrator able to clearly delineate the final years of a man largely misunderstood by the film community he helped create. “I felt in writing this book that I sometimes had a window into John’s psyche,” Mann says. “I recognized so much of myself in him. We both are storytellers. We both rejected the notion that we’re these struggling artists suffering for our art. John just wanted to tell good stories.”

In the end, that’s what any good film-maker wants. As Mann recalls the many afternoons he spent sitting with Schlesinger, talking about his life on and off celluloid, it becomes clear that in some ways a debt has been paid by this book as well, that the best story of all was the success Schlesinger had living life on his own terms. And though Schlesinger’s death on July 25, 2003, was marked by tributes and remembrances in most major media outlets, it is Mann who provides the clearest coda: In the final pages of his book, he shows the last tender moments between Childers and Schlesinger, punctuated with Schlesinger’s final bow to his audience; his last words were, simply, “Thank you.”

Excerpt from Edge of Midnight – The Life of John Schlesinger