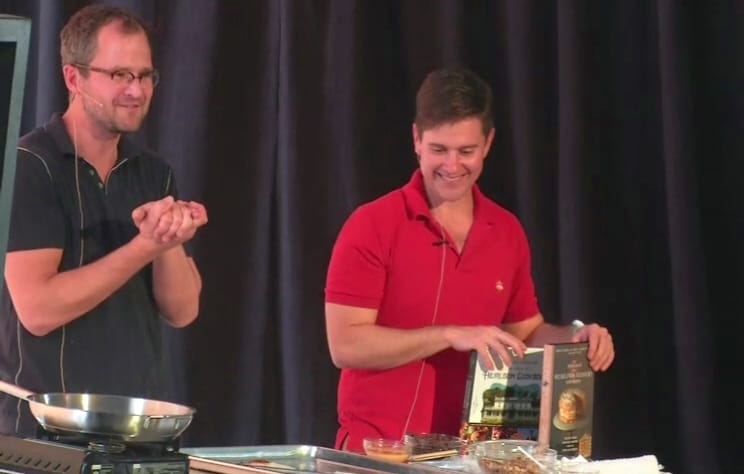 In this video, the boys make rocky road potstickers from The Beekman 1802 Heirloom Dessert Cookbook: 100 Delicious Heritage Recipes from the Farm and Garden by Brent Ridge and Josh Kilmer-Purcell and Sandy Gluck

Brent Ridge and Josh Kilmer-Purcell The Fabulous Beekman Boys When Josh Kilmer-Purcell and Dr. Brent Ridge bought the Beekman Farm in upstate New York in 2008, they didn’t just start a farm, they started a movement. Only five years later they have a hit TV show, bestselling books, product lines in leading retail stores, a massive social following, and a James Beard-nominated lifestyle website.

Best known as “The Fabulous Beekman Boys” from their hit television reality show, the duo has put their stylish stamp on seasonal living. Their farm and surrounding community serves as the inspiration for their lifestyle brand “Beekman 1802.” The brand’s signature beauty, home, and food products can be found on the shelves at Henri Bendel, Anthropologie, Williams–Sonoma, and other national retail partners.

The Beekman 1802 cookbook launched on QVC to record sales, and the memoir of the boys’ farm life, The Bucolic Plague, was a national best seller. The 2011 launch of Beekman 1802 Blaak Cheese drew a wait list of more than 7,500 people.