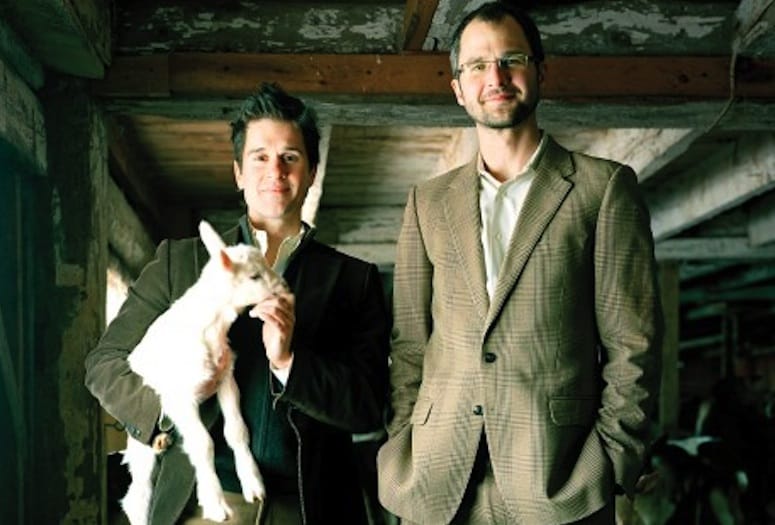 When Josh Kilmer-Purcell and partner Dr. Brent Ridge bought their 19th-century country home in upstate New York in 2006, they never dreamed they would plant much more than a small garden on the 60-acre property, much less put the backyard barn to use.

But over the last eight years, the couple has gone from a pair of fast-paced New Yorkers to full-fledged farmers with an impressive list of accomplishments:

If that wasn’t enough, the pair, who will appear at the Food & Wine Festival Palm Desert March 21-23, even managed to find time to win “The Amazing Race” in 2012.

Their journey to accidental farmers began in 2006 when Kilmer-Purcell, a New York Times bestselling author, and Ridge, former vice president of Healthy Living for Martha Stewart Omnimedia, spotted a “for sale” sign on the Beekman Mansion in Sharon Springs, NY, during their annual autumn apple-picking pilgrimage.

“It was only supposed to be a weekend place,” Ridge says, but when the pair lost their jobs in 2008, “we had to find a way to make the farm sustain itself.”

Opportunity knocked when local farmer John Hall, who was losing his own farm, approached the pair with a plea to let his herd of 60 goats graze on the Beekman property. Soon, they were able to turn the goats’ milk into artisanal soaps, cheeses and, ultimately, a sustainable business.

Life on the farm dramatically changed the couple’s approach toward food. By raising about 80 percent of their own food supply, Ridge says he and his partner have a new appreciation for eating with the seasons.

Without having them readily available, tomatoes are one crop he especially looks forward to in the summer months.

"When you taste that first tomato after not having it for six months, it tastes like the best tomato you've ever had," Ridge says. "There's really something to be said for delayed gratification." The seductive power of delayed gratification is clearly working for the pair: Beekman 1802’s seasonal goat cheese, Blaak, maintains a waitlist with more than 7,000 names. The aged cheese’s name alludes to its signature black rind, which comes from a coat of vegetable ash.

Between producing their artisan goats milk products, tending to their farm, maintaining their online shop and penning cookbooks, Ridge and Kilmer-Purcell wear many hats – but Ridge maintains that a chef’s hat isn’t one of them.

“We’re not chefs; we are cooks,” Ridge says. “We cook just like every other person: we see what we have on hand and we create something with it.”

The Beekman Boys make a myriad of products from their goats' milk, but one confection has a special place in Ridge's heart: cajeta. Goat's milk is combined with sugar and left to simmer until it becomes a sweet, thick and pourable sauce that can take caramel's place in any recipe.

"Most people only know caramel from high-fructose corn syrup," Ridge said. "When you taste a true caramel, it really is an amazing thing."

Here, the Beekman Boys share their spicy take on cajeta.

Let cool. Strain the cajeta into a jar through a mesh strainer and keep refrigerated.