The Fabulous Palm Springs Follies to Close its Doors for Good 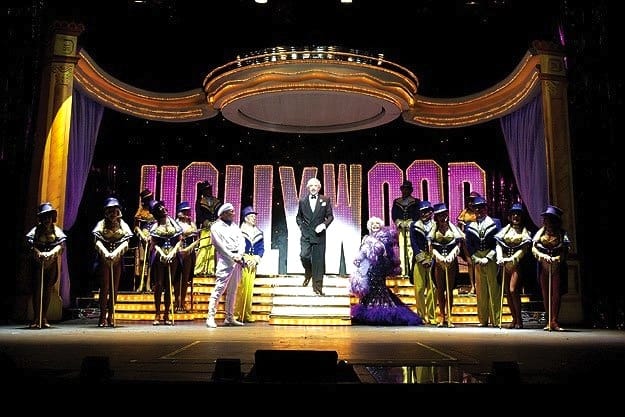 The Fabulous Palm Springs Follies has announced the upcoming 2013-14 season will be its last, dropping the curtain on one of the longest running 'Follies' shows in the country after 23 years.

The final season, called "The Last Hurrah!", will open Nov. 1 and present its last performance on the stage of the historic Plaza Theatre on May 18, 2014, according to a press release issued June 5 by The Fabulous Palm Springs Follies.

“Our 23rd season will be a ‘greatest hits’ version of our show,” said Follies producer and co-founder Riff Markowitz, “with the best dance production numbers and variety acts of past years, and three iconic headliners packed into one last spectacular Follies season. It will be a fitting and exciting last hurrah!"

Markowitz is also a part of the cast; in fact, as Follies master of ceremonies, he hasn’t missed a single show since its premier in 1992. The Follies have been seen by nearly 3 million people featuring a cast ranging in age from 55 to 83 years old, according to its website. The show features lavish, Broadway-caliber production numbers and plays five days a week.

When the curtain first rose on the Follies, the Coachella Valley entertainment landscape was vastly different than today. The Palm Springs International Film Festival was in its infancy, the McCallum Theatre was just three years old, and the Coachella Valley had yet to welcome its first casino.

And yet, a few years later, the Follies was a smash hit. So much so that the cover story of the October, 1997 edition of Palm Springs Life magazine was headlined: “How The Fabulous Palm Springs Follies Saved Downtown.”

And the show has been bringing patrons into the heart of Palm Springs by auto, airline and tour busload ever since. Its press coverage and notoriety have also grown, from local curiosity to national and international sensation, having been covered by nearly every major media outlet in the country and many others around the world.

“It has been an amazing, wonderful ride,” said Markowitz. “We have always adored our Follies, this tiny jewel box theatre, our town and most of all, our people, comprised of the Follies cast and staff — numbering more than a 110 souls. We all feel that we have saved the very best for last. We also take great comfort in knowing that this wonderful theater will continue as a center of Palm Springs’ glamour and show biz legend.”

Markowitz said the Plaza Theater, which opened in 1936 with the Greta Garbo and Robert Taylor premiere, Camille, will take on another life after the Follies leave its premises.

“We have discussed with Palm Springs International Film Festival Chairman Harold Matzner and Mayor Steve Pougnet that next May, when the final curtain of our Follies comes down, it will initiate a retrofitting in preparation for the theater's next incarnation," Markowitz said. "I know that this historic house, that has contributed so much to our downtown, will continue to be a theatrical and creative focal point in the decades ahead."

Pougnet and Matzner extended their congratulations to the Follies' tremendous run.

“The City of Palm Springs would like to thank Riff Markowitz, Mary Jardin and the cast of the Fabulous Palm Springs Follies for 22 spectacular years,” said Mayor Pougnet. “In difficult times, the Follies continued to perform and boost our city’s tourism. What Riff and Mary did for Palm Springs is beyond compare – hometown folks and visitors will miss seeing them at the Plaza Theatre.”

Added Matzner, “The Fabulous Palm Springs Follies has been an outstanding 22-year success story in the City of Palm Springs. Founders Riff Markowitz, Mary Jardin and their tremendous cast are to be commended for their incredible talent and creative vision — and the Film Festival looks forward to utilizing the historic Plaza Theatre for screenings."

“We are really going to miss our wonderful audiences,” said Mary Jardin, Follies co-founder and director of marketing. “We hope to show them how deeply we care by putting everything we have into this last production. We’re going to go all out.”