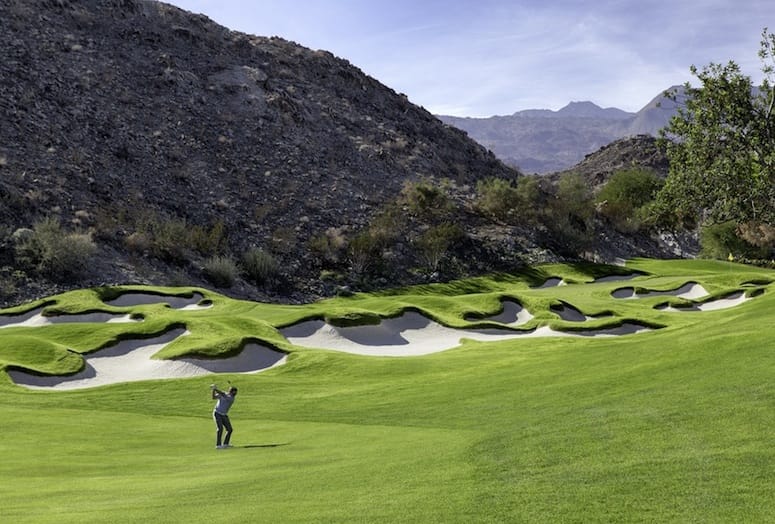 Tom Fazio's first exposure to the Coachella Valley was a trip to watch his uncle play in the Bob Hope Classic many years ago.

It was on this trip that he first fell in love with the area and knew he would someday be back.

"The desert, and all that it means to golf, is a very sacred place for me," says Fazio (pictured below).

For more than three decades, Fazio has built his reputation as a world renown golf course architect in the Coachella Valley.

In 1980, the first two Fazio courses were completed and it was the birth of the new standard of excellence in country club living. These two courses, The Desert and The Mountain, made The Vintage Club become the place to belong to very quickly. Located at the base of the Eisenhower Mountain, the spectacular views combined with the majestic course design made for a serene environment. Shortly after the opening of the club, a very interesting piece of golf history was born.

In 1981, developer and close friend of Fazio's, Mick Humphreys hosted the inaugural Vintage Invitational with participants such as Gene Sarazen, Sam Sneed, Byron Nelson, Bob Rosburg, Arnold Palmer and many more greats of yesteryears. This incredible event went on to become the starting point for the Senior Tour, which is now the Champions Tour. Fazio's incredible architecture played a pivotal role in the creation of what has become a great part of our professional golf culture.

Since then, Fazio has gone on to build some other fantastic courses in the Coachella Valley, including The Quarry at La Quinta, The Madison Club, Bighorn Canyons Course and re-design of Eldorado Country Club. Each of these courses, along with The Vintage Club, are truly among the best the desert has to offer.

Fazio has more clubs listed in the Top 100 in America than any other course designer. This past summer, Fazio returned to where it all started and waive his brush across the canvas of The Mountain Course at The Vintage Club for a re-model that is second to none.

"It's very dear to me…The Vintage Club was the milestone which opened the door to the next phase of courses I became involved with," says Fazio. "With the evolution of the game and the vision that the membership has to keep the club at the top of the class makes me so happy to return and modernize an already great course."

During this renovation, I had the great pleasure of working with Fazio on many aspects of the project. I can tell you that his passion for the game and his pursuit of making the golfer enjoy their experience is unparalleled.

Much like Picasso, van Gogh and de Vinci, Fazio has the vision and execution worthy of leaving any golfer breathless.

David Woods has been the PGA Director of Golf at The Vintage Club in Indian Wells since 2007. His golf column appears monthly. Visit www.thevintageclub.com for more information on The Vintage Club.