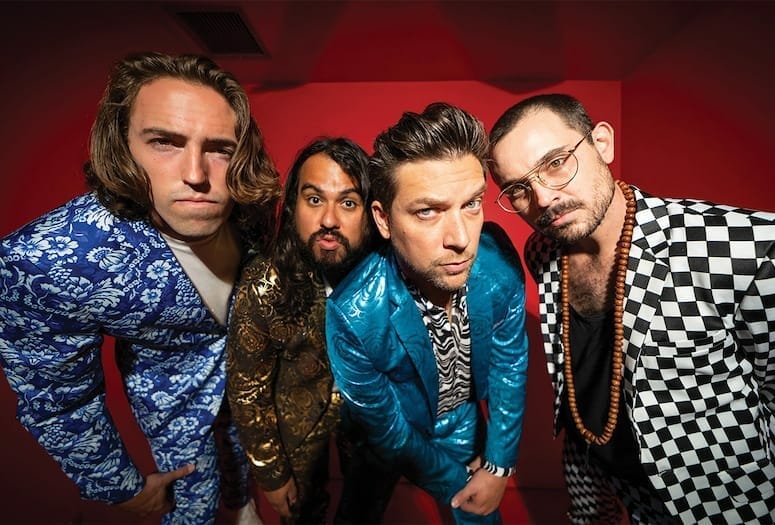 The Flusters include (from left) Ethan Banas, Mario Estrada, Dougie Van Sant Jr., and Danny White. See them May 13 at the Oasis Music Festival in Palm Springs.
PHOTOGRAPH COURTESY THE FLUSTERS

It’s been nearly two years since The Flusters took the stage to perform before a desert audience. They wanted to make sure when they said yes to a gig, the reasoning was compelling.

“We’ve turned down a lot down here because we were saving our steam for a unique stage and a unique experience for ourselves too,” says Dougie Van Sant Jr. “Having it be as iconic and important to save this venue (Plaza Theatre) seems like a worthy place to debut our new stuff and reconnect with our audience.”

The Flusters are among a handful of local bands that are part of the inaugural Oasis Music Festival, set for May 11-15, which has fused a variety of music styles that will be showcased at the historic Plaza Theatre in Palm Springs but also at more than 20 partnering venues in the city. A portion of the proceeds will go toward restoring the Plaza Theatre.

“In a place like the Plaza, it’s a seated theater kind of experience. We really want to suck ‘em in and create a really visceral experience,” Van Sant Jr. notes. “It’s not heavy or loud, blowing your wig back. Experiential is what we want. Atmospheric sound is good. Especially for this show, maybe at other shows people are looking for more energy. But we want to suck ‘em in, just like how we’ve experienced at other shows where you could cut the air with a knife because the atmosphere was so thick. We gravitate toward painting that picture in your mind of something very specific.”

Since 2016 when The Flusters appeared at Coachella, they have done a bang-up job of garnering an audience and keeping it. Featuring band members Dougie Van Sant Jr., Danny White, Mario Estrada, and newcomer Ethan Banas, they will open the May 13 card at 5 p.m. and be followed by Thee Sacred Souls, Y La Bamba, The Dip, and Lee Fields and the Expressions.

The band spends a few minutes with Palm Springs Life about their upcoming performance, how they handled the pandemic, and more.

What do you think makes The Flusters stand out from other bands?

Dougie Van Sant Jr.: I’m experienced in afro-pop whereas this is a more rock and surf pop dynamic ,which I haven’t really heard out here yet. That style sort of defined us. Pulling out elements from each of us.. I can only describe it as a “red-headed” middle child in a way. Just there’s stuff that we earned and solidified from doing that . We’re super melodic.

How do you come up with the song titles for your songs?

Van Sant Jr.: Sometimes it’s like a key phrase in a song or sometimes it’s something representative of something behind the song.. It just depends. Mario and I are lyricists in the band and we’ll throw a bunch of shit to the wall and something will obviously stick and be the name. It’s just a creative process.

Do you think the pandemic provided time to go back to the studio and work on your music? Did you make any changes, adjustments, etc?

Van Sant Jr.: Separately in our own ways we kinda grew. We got a new drummer too. We did a live show in October last year in San Diego with Flo Rida. That was our first show ever with Ethan, it was wild. We blew the lid off of it and it was a great show. We emerged with better everything. Better writing. Better renditions of our previous songs. Partly just us getting tired of doing the same thing over and over again.We were just doing all these shows. Everyone was doing The Flusters thing. You have to separate your time as an artist between creation and performance.

Ethan: As a drummer, it's good to only take the gigs you’re gonna connect with. We have our own separate careers. We’re all career people. That makes a difference because we’re secure in our lives.

How do you balance the band with your other careers?

Van Sant Jr.: The amount of stuff that we did in our first couple of years as a band…It showed us the potential we had. The band gave me the first idea, we played Coachella before we had an album out. There is no limit to what is possible. These two things were never really on my radar or a possibility on my mind. This band was around before any of our careers.

Mario: I’m an instrument teacher. My middle school students are always like, “Mr. Strata, is that you? Why don’t you play us music?” And I have to get back on track.

Van Sant Jr.: To get your stuff to a large audience is a very difficult journey for most. Overnight success is a lie. It might seem that way, but there is a lot in the middle of it. Sleepless nights of these ideas. We’ve gotten so far from the beginning, we started out upstairs in this little office and gigged and gigged and it expanded and now this is growing where we can feed ourselves creatively.

Where do you see The Flusters heading? Do you think your style will evolve or do you plan on sticking to your niché?

Van Sant Jr.: We’ll never do that. We’re just not built that way. There’s too many influences from all four of us. If you listen to our one and only full length album, you’ll find four different styles. It goes from Indie to Surf to ‘90s melodic grunge ballot… it goes all over the place.

• READ NEXT: Giselle Woo Welcomes the Chance to play the Big Stage.