Albert Frey designed the Cree House, on the border between Palm Springs and Cathedral City, in 1955.
PHOTOGRAPHS BY LANCE GERBER

Albert Frey designed the Cree House, on the border between Palm Springs and Cathedral City, in 1955, but the history of the residence goes back almost a decade earlier. In 1947, Raymond Cree, a former Riverside County school superintendent turned real estate developer (he once owned the land on which the Thunderbird Country Club now stands), bought 12 acres of desert scrub on a rocky hillside off East Palm Canyon Drive and commissioned Frey to design the Desert Hills Hotel.

The luxury resort comprised nine modern-looking bungalows nestled on the face of a pyramid-shaped hill and, at its base, a contemporary restaurant. Judging by Frey’s original design for the property, the complex would have been stunning, something architectural fans from all over the world no doubt would have visited to study and admire. Who knows, it might even have become the Palm Springs equivalent of the Frank Lloyd Wright campus, Taliesin West, in Scottsdale. But the project was never realized.

Be among the first to see the restored hillside Cree House, which features some of architect Albert Frey’s signature characteristics: a spectacular siting, a jutting balcony with fiberglass railings, and thin roof overhangs. Nicholas Lawrence Design, in partnership with Knoll, has outfitted the house with Knoll furniture and vintage accents for public tours during Modernism Week, Feb. 14–24.

VIDEO: View the house and hear from architecture historian Robert Imber on the history and aesthetics of Cree House.

What happened? Nobody really knows. Not even Joseph Rosa, considered the world’s foremost authority on Frey. Says Rosa, now the director and CEO of the Frye Art Museum in Seattle (not to be confused with Frey the architect), “The desert has always been a place where dreamers come up with big ideas, but the traction isn’t always there. So Raymond Cree had a vision, and Albert Frey put that vision down on paper, but the dream was never realized, and we don’t really know why.”

Instead, when he was 82, Raymond Cree, who still owned the undeveloped land, asked Frey to switch gears and design a simple two-bedroom house perched on the hillside overlooking what should have been his fancy resort restaurant. Architectural historians have long dubbed the modest 1,300-square-foot home — which cost all of $40,000 to build — the “Forgotten Frey.” Not because anyone ever really forgot about it, but because hardly anyone has ever seen it.

“In a certain way,” Rosa says, “this is a house that wasn’t forgotten so much as ignored. And perhaps it’s better, in some ways, that it was left alone as it was for so many years.” 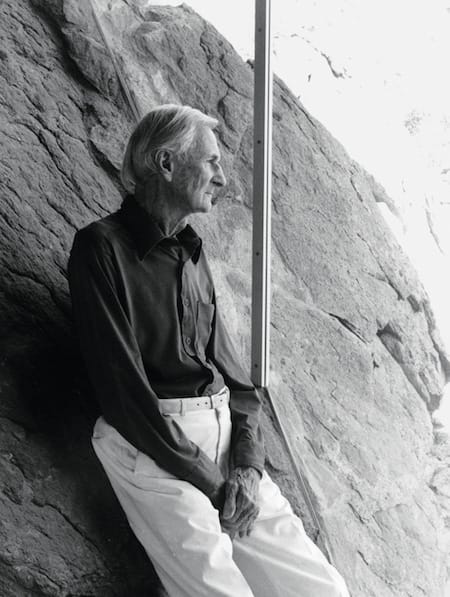 Albert Frey at his home known as Frey House II. 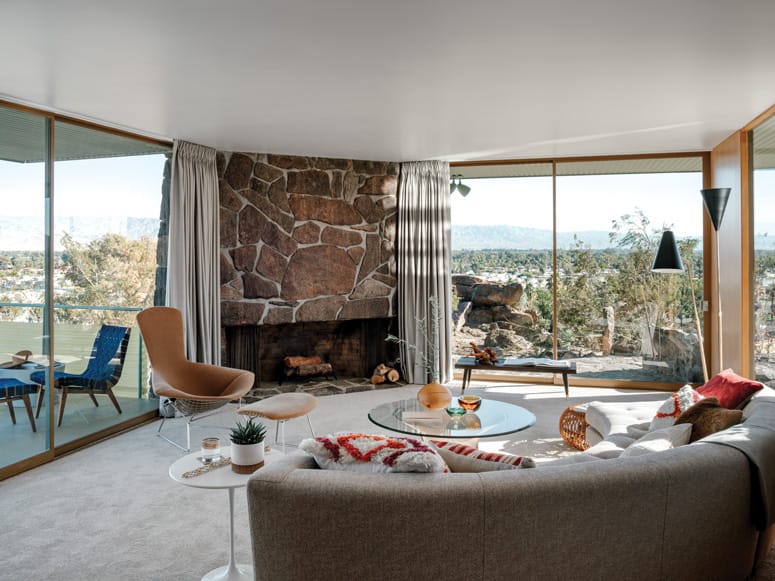 Sidney Williams, former curator of architecture and design at the Palm Springs Art Museum, remembers contacting the owners several times over the years, begging to have a peak at the house. “I was always turned down,” she says. “To this day, I’ve never been inside the house. I’m very curious to see it.”

And she’ll have the chance, as will others, with tours of the recently restored Forgotten Frey being offered during Modernism Week, Feb. 14–24.

The house, which has had only a few owners, boasts a fascinating history. When Cree, then 90 years old, moved in with a niece in Riverside in 1965, he sold the Frey house to Milton F. Kreis, who not only owned the restaurant at the base of the hill, then called Rim-Rocks, but also a Googie-style restaurant in Palm Springs designed by William F. Cody, known as Aloha Jhoe’s Tiki Bar and Polynesian Restaurant (oddly enough, the eatery served Cantonese food). 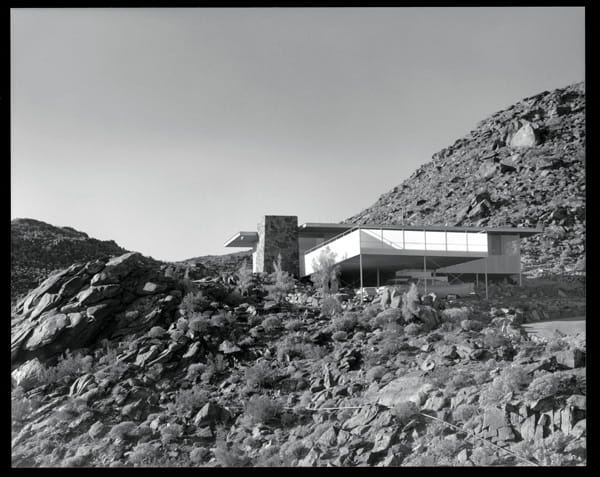 A view from Julius Shulman’s photo shoot of the house. 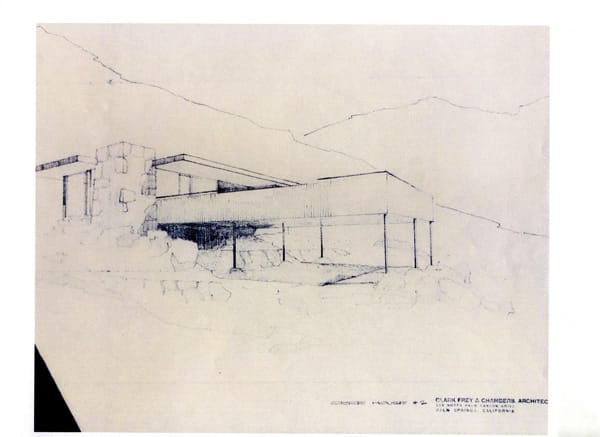 Albert Frey’s rendering of the Cree House, set into the mountain on the border of Palm Springs and Cathedral City.

Now this is where the story gets complicated: Aloha Jhoe’s didn’t last long. It was replaced by Sherman’s Steak House, as in Sherman Harris, who would later found Sherman’s Deli & Bakery. So when Kreis died in 1972, who should buy the Forgotten Frey but Harris?

“It was always a unique house,” recalls Sherman’s son, Sam Harris, who took over ownership of the deli (with his sister Janet) and the home. The younger Harris remembers spending weekends at the proprty as a kid and being fascinated by the oddities of the home — like the vintage refrigerator that hung on the kitchen wall. 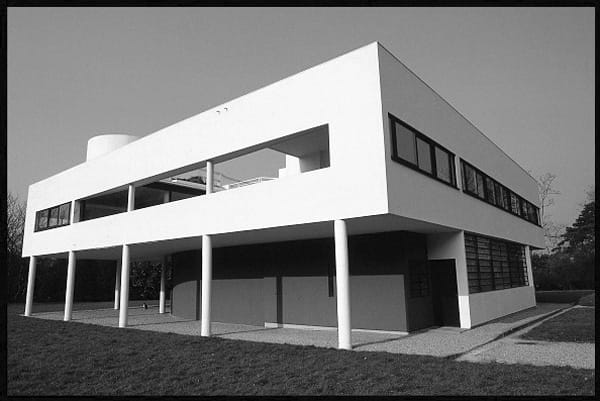 PHOTO BY GETTY IMAGES/THIERRY PERRIN
Albert Frey’s Cree House design recalls the details from his work on one of Le Corbusier’s masterworks, the Villa Savoye.

“It was this strange three-door, hanging refrigerator-freezer. General Electric made them, but they were expensive and only in production for a few years,” Harris says. He has spent about a year restoring the neglected landmark. It’s not until Harris actually opens one of the refrigerator door panels that you even know it’s an appliance; it’s built to look like three hanging kitchen cabinets over the Formica counters. Harris has no idea why the almost-65-year-old fridge, which stopped working long ago, was never replaced, but it wasn’t. “Maybe it was too much of a hassle to take it out,” he says. “It weighs a ton.” 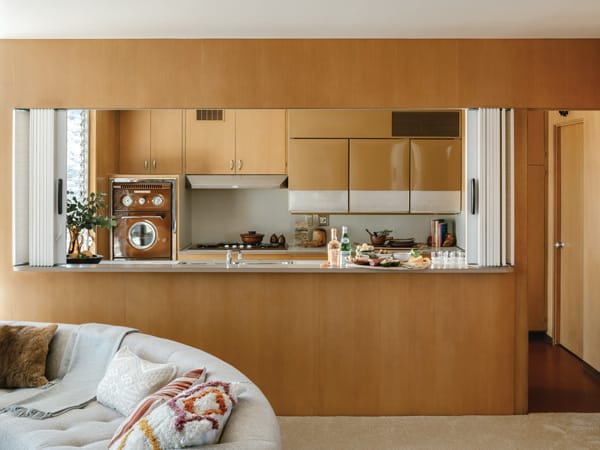 The kitchen boasts original appliances, including a three-door refrigerator-freezer and an oven with circular windows.

But Harris, who committed to restoring the house as much as possible to its original 1955 condition, is glad the copper-colored fridge (it also came in teal and pink) was never replaced — though it took some doing to get it up and running again. Obviously Harris couldn’t call up General Electric Co. and ask if they had the parts for a refrigerator compressor that hadn’t been manufactured in more than 50 years. So a machinist had to rebuild it from scratch. He found a Palm Springs auto repair shop to repaint the enamel door panels and then enlisted someone to remake the plastic inserts inside the three-panel fridge.

Chuckling, Harris concedes that maybe doing all of that was a little crazy. “But you know, once you decide you really want to bring it back to its original 1955 state, you can’t do it halfway.” Which is why his contractor spent days tracking down the home’s original shower door from a bone yard for old glass in San Diego and restoring the yellow corrugated fiberglass panels that wrapped around the deck extending off the living room.

“Albert Frey was known for his fascination for designing homes using what, at the time, were state-of-the-art industrial materials,” says Williams, the architecture and design curator. “So now we may see yellow corrugated fiberglass panels and think they’re unattractive, but in the early ’50s, this was quite avant-garde. Fiberglass wasn’t in common usage until well after World War II.” 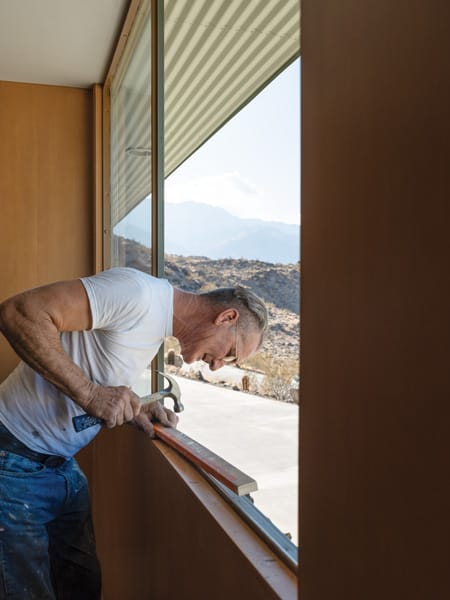 Designer and craftsman John Vugrin attended to every detail of the restoration.

“In a certain way, this is a house that wasn’t forgotten so much as it was ignored. And perhaps it’s better, in some ways, that it was left alone for so many years.”

Also unique were the industrial colored asbestos-cement sheets used to wrap around the outside of the house. The encelia-green-striped asbestos-cement sheets remain a distinctive feature of the home’s design. “The house is typical in the industrial materials Frey used,” Williams continues. “And the color plan — beige, tan, sage green — they’re the colors of the desert, bringing the outdoors in.”

In restoring the home, it helps that Harris discovered a couple of magazine stories on the house from the ’50s, including one that listed the materials and manufacturers used, from the Modernfold sliding partitions to the Atomic Age gas oven by Western Holly with a porthole in the middle that makes it look more like a washing machine than an oven. “All the doors in the house are original but had to be restored,” Harris says. “The kitchen still has the original paneling, but most of the other paneling inside the house had to be taken down and restored.”

An important centerpiece of the house is the fireplace, built from rock sourced around the property. It’s the only strong vertical element, passing through the horizontal mass of the house and anchoring it to the hill on which it sits. “It’s a unique element,” Williams says. “The way it’s situated, it grounds the whole house, and everything pivots around it.” 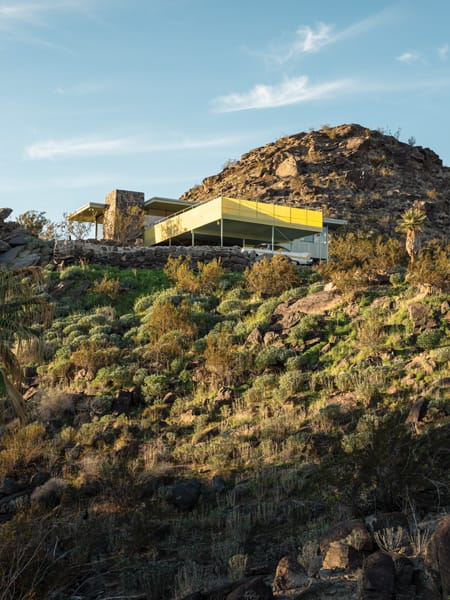 The kitchen boasts original appliances, including a three-door refrigerator-freezer and an oven with circular windows.

“I remember Albert telling me that whenever he felt stuck or had a problem with design, he’d go back to his training with Le Corbusier to rediscover simple, elegant design.”

Both Williams and Rosa maintain that the Cree House isn’t important only as a stand-alone example of Frey’s innovative architecture but that, as Rosa says, it best represents his Le Corbusier schooling.

“I remember Albert telling me that whenever he felt stuck or had a problem with design, he’d go back to his training with Le Corbusier to rediscover simple, elegant design,” Rosa says. “And the Cree House — along with his own home, Frey II — are perfect examples of that.”

Williams echoes the thought: “You can draw a straight line from the Cree House to some of Frey’s most important works in the desert, including the Carey-Pirozzi House [built in 1956] and his own home [completed in 1964], perched on a hill, using simple, industrial materials, and designed to minimize its impact on the surrounding environment — like the Cree House. We are all very lucky that it is still there and looks pretty much the way Albert designed it.” 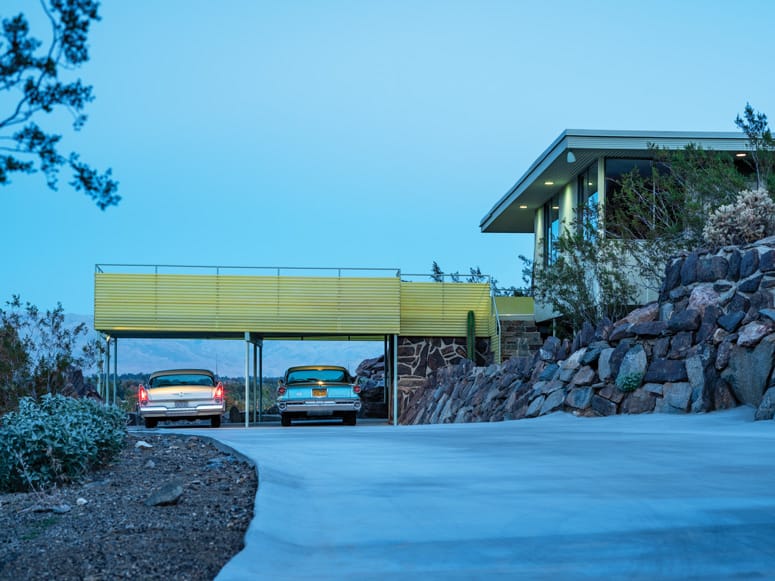 WHO MADE IT HAPPEN FOR THE FORGOTTEN FREY HOUSE