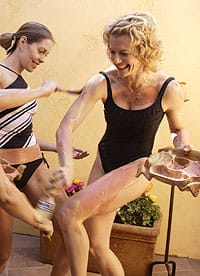 The latest spa trend has less to do with the muds, scrubs, and wraps on the menu than the spa-goers themselves. With that in mind, it seems everything old is new again. The “friend trend” harks to ancient Roman baths, which were important gathering centers.

“The public nature [of the baths] created the proper environment — much like a city club or community center — for social intercourse varying from neighborhood gossip to business discussions,” writes Fikret Yegul in Baths and Bathing in Classical Antiquity (The MIT Press, 1996).

These days, friends in Reykjavik, Iceland, flock to thermal complexes to socialize while they soak. In Southern California, the Regent Beverly Hills Hotel offers a Pretty Woman Suite Getaway that raises the bar on girls’ night out. The package includes spa treatments and a “spajama party” complete with chick flicks, champagne, and chocolate-covered strawberries.

In the desert, the group spa experience takes an innovative spin at The Well, a luxury spa at Miramonte Resort & Spa in Indian Wells. There, gal pals gather for bachelorette painting parties — billed as a Pittura Festa — and use colored mud and clays to paint each other with soft brushes.

Spa Director Jennifer di Francesco reports on recent additions to Miramonte’s spa-related offerings: Desperate Spa Moms and Ya Ya Women’s Workshops. These focus on women and their relationships (the former even includes a complimentary painting party for mom and child), discounted spa treatments, evening receptions, and speakers.

Linda Richey, spa director at The Spa at Spa Resort Casino in Palm Springs, speaks glowingly of baby showers, reunions, bridal parties, and friends on an annual retreat reserving a half or full day at the spa. “And that can be anywhere from six to 46 people,” she says. It seems the spa is not just a place to take the waters, but also a place to reinforce relationships and create memorable occasions.

Former Palm Springs Mayor Will Kleindienst, now a private consultant, is a devoted spa-goer who plans family vacations specifically to spa-equipped resorts. In between, he frequents local spas. “My spa birthday party is a tradition,” he says. “The guests confirm their appointments in advance, and we rendezvous in the thermal pool and in the evening for dinner, in our robes, before the regular [dinner] seating. After having spa treatments all day, we are totally withered and relaxed. Friends who can’t spa with us during the day arrive for dinner, usually frazzled and stressed.”

His favorite treatment is an Ayurvedic massage in which two therapists work in tandem, dripping warm sesame oil between the eyes and then using synchronized hand movements on the body’s meridians. “I leave the table feeling as if I am applesauce in a Ziploc bag,” Kleindienst says. “My friends can see the difference after that treatment just from a golden glow radiating from my face.”

Palm Springs Yacht Club, the spa at Parker Palm Springs, offers the social aspect with unconventional style. Lychee martinis with your friends after your sports massage? No problem. Inspired by the lifestyle of the 1950s country club scene, this ultra-hip, 16-room spa — decked out in crisp blue and white — encourages guests to converse freely. “Whispering is not an option,” they say. That’s in direct contrast to the signs you see in spa relaxation areas across America: “Whisper only, please” or “Quiet. Treatment in session.” And don’t ask for the spa director; Ursula Longo is identified as the Commodore.

Even if you visit the spa alone, it’s quite possible you might leave this lighthearted, truly collegial ambiance with a new friend in tow.

Rianna Riego, director of spa and retail at the JW Marriott Starr Pass Resort & Spa in Tucson, Ariz., views the spa as a fountain of friendship that highlights the spa experience.

“The best place for quality bonding time is usually the hydrotherapy tubs and steam rooms where one does nothing but sit, lie down, relax, and surrender to the feeling — much like sitting around with friends and sharing thoughts and feelings. Spas are designed to focus on the basic and simple pleasures of life, filtering out the intrusions of everyday life. Remember, when you enter the spa, you give up your [external] communication system — from cell phones, television, and newspaper to laptops. During spa time, you disconnect from the outside world and have an opportunity to concentrate on your friends and reinforce friendships.”

With the shift from the isolated spa experience to a shared happening, body wraps and massages become a partnership between
people who have uninterrupted time to talk.

Doris Mechanick, a child development specialist and Rancho Mirage resident, and her grown daughter Carol chose a spa experience to celebrate Mother’s Day. She felt the occasion was a special time to discuss — uninterrupted — a variety of issues that had been on both of their minds for months. Similarly, Candy Price of Minneapolis, Minn., and a frequent desert visitor, spent Mother’s Day with her 14-year-old daughter, Mari, introducing her to a cleansing facial and pedicure — a sort of rite-of-passage that they enjoyed side-by-side.

Taking the shared spa experience another step is Spa on the Go of La Quinta, which caters to private, in-home parties. Owner Brenda Burger mobilized her custom-painted Spa on the Go vans last summer; from the day they debuted, the demand to bring friends together for spa services has blossomed.

“A recent spa party was five hours,” Burger says. “We set up the treatment areas in the
residence, with special attention to traffic flow and privacy. I can bring a chef into the event to prepare a healthy spa-style lunch so that treatments can span morning to afternoon.” Burger visits with her clients in advance to personalize the event. “The average spa party is seven women, two treatments each, which can be a 30-minute foot “facial” and a 30-minute massage.” On the spa menu are five massages: shea butter, hot stone, therapeutic, reflexology, and sports massages. “I planned a spa party for a group of women and it was so successful the host’s husband in turn planned a party for his golf buddies,” Burger says.

Men enjoy camaraderie as much as women. Even bad guy Al Capone took his posse to Hot Springs, Ark., and Desert Hot Springs in the 1920s and ’30s. Two Bunch Palms, which has a bungalow named in his honor, reportedly served as a hideout for Capone and his men. And, legend has it, they didn’t spend all their time on the lookout. Though their social experience likely differs, today’s guests can “take the waters” in the same rock-lined thermal pool used by Capone and his men.