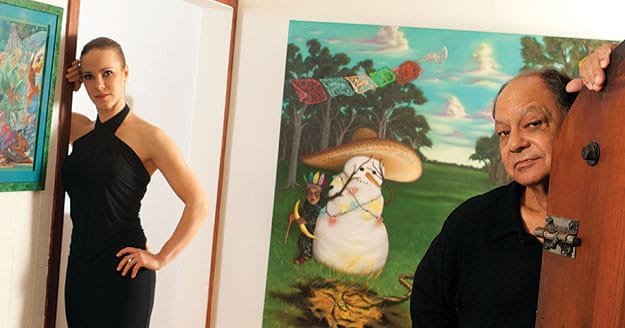 Cheech Marin ambles into his living room at 2:05 p.m. on a crisp and cool Sunday at his Malibu Beach house overlooking the peaceful Pacific. He flew in earlier in the day from Monterey, where he attended the opening of “Chicanitas: Small Paintings From the Cheech Marin Collection” at the Museum of Monterey. And by 5 p.m., he would welcome guests to a salon featuring actor/playwright/painter Herbert Siguenza, performing “A Weekend With Picasso,” and opera singer Dale Franzen (also director of Santa Monica’s Broad Stage) accompanied by Marin’s concert pianist wife, Natasha.

All the while, he more than half-heartedly wishes he were in Palm Springs, where he plans to build a house “as soon as I can talk Natasha into it,” he says. Meanwhile, he’ll be omnipresent at Palm Springs Convention Center during the inaugural Palm Springs Fine Art Fair (Feb. 17-19), where he’ll attend two VIP receptions (one benefiting Palm Springs Art Museum and another sponsored by Palm Springs Life), accept the fair’s Art Patron of the Year Award, discuss his collection and goals on stage, and exhibit and sell a small selection of works from his collection at the booth for Thomas Paul Fine Art of Los Angeles.

On the back patio, with a panoramic ocean view, the actor enjoys a break from taping episodes of “Rob,” the CBS sitcom that debuted in January. In the show, Marin plays Fernando, the judgmental father-in-law of Rob Schneider’s character. Schneider, an executive producer and co-writer on the series, pokes fun at his own life as a bachelor who marries into a close-knit Mexican-American family.

Marin is as comfortable in a room full of art people as he is in front of a television camera. He even plays a role: champion of Chicano art. But it’s no act. Shortly after he began collecting the work of Chicano artists in 1985, he said that one day he would hang their works in one space and the art establishment — which has turned up its nose to the genre and largely still categorizes it as folk art — would be unable to ignore them.

That day came in 2001, when “Chicano Visions: American Painters on the Verge” toured to 13 venues nationwide, setting attendance records at many institutions, including the Smithsonian, which drew almost 1 million visitors. Some of the paintings in the show also appeared in “Los Angelenos/Chicano Painters of L.A.: Selections From the Cheech Marin Collection,” a 2008 exhibition at LACMA.

“Chicanos are the mainstream,” he says. “Art is the gentlest form of education there is. If museums don’t have pictures of your culture on the walls, they’re not talking to you. It’s amazing how museums have stonewalled the art.” To gain acceptance, he adds, “You have to learn how to eat shit until it tastes like caviar and keep presenting your argument.”

Chicano art was born in the civil rights movement in the 1960s, when activist César Chávez and playwright/director Luis Valdez were at the height of their popularity. “Any involved Chicano was political at that time,” Marin says, adding that the style often fuses the handcrafted Mexican tradition with American Pop. “Now, the artists are dealing with their own concerns.”

That fuels a generational rift in Chicano art, challenging its very definition. “The debate on what is Chicano is interesting warfare,” Marin says. “Who is going to control the definition? People involved in the political activity of the ’60s want to control it. But Chicano artists can be Minimalist, Abstract Expressionists, or something else.” The proliferation of digital art in the early 2000s, he says, “is what really divided them. These artists are influenced by process rather than racial identity.”

For the artists, “Chicano” begins with self-identification. For Marin, it’s a school as valid as Light and Space, Hudson River, and any other American movement.

“I’m trying to establish the field, commercially and aesthetically, focusing on career retrospectives and identifying the next generation of artists,” Marin says. “I go out seeking them. I travel everywhere, so I’m privy to all the artists coming up. And they’re really good — and some of them look like accountants. A lot of these guys are university teachers. They’re good, and they’re hip.”

Marin speaks with a measure of authority, having begun studying art in his early teens by checking out all the art books at the public library — from Old Masters to Modern Masters. “I took out the everything they had. I had a visual memory of it.”

Although he knew Ed Ruscha and many of the artists working in Venice, he concedes the gap in his knowledge was in contemporary art. “I started going to galleries on the west side and saw some Chicano painters,” he recalls. “They were good. It was a perfect storm. I had the expertise, knowledge, and money. The masterpieces of Chicano art were available, and I loved the paintings.”

Marin, 64, has since amassed more than 400 works of art — and counting. “It’s something that’s very immediate and visceral when I choose artwork,” he says, adding that he generally buys what he likes more than he tries to be comprehensive in the genre. “I have to stand in front of a painting and get an emotional reaction to it right away. That reaction can be influenced by a lot of intellectual interests, but I have to look at it and say, ‘Wow, that moves me, I get it, I like it, I like the way it’s done.’ That’s what I hope other people get when they see the work.

“My theory is we’re just at the beginning of Chicano art,” he says. “We’re experiencing the biggest immigration wave in history, and 80 percent of them are under 25 years old. We’re going to have a baby explosion. The challenge is to integrate them into the system rather than persecute them.

“I’m writing a series of essays — vignettes of Chicano art. It will be comical.” The basic premise, he laughs, is, “We come in peace, and we have you surrounded.”

For his part, Marin was born in South Central Los Angeles and grew up in the San Fernando Valley thinking the American dream was his to realize. He retains the same resolve for younger generations of Mexican-Americans.

“This is an interesting journey,” he says. “A lot of these artists haven’t gotten the recognition. No museum [outside El Paso] has a collection of Chicano art. It’s such a rich field. What I’m doing is such a positive.”