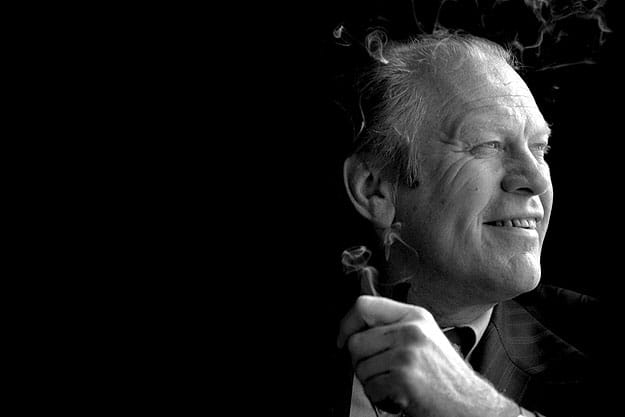 Gerald Ford was House minority leader in 1973 when President Richard Nixon chose him as the 40th vice president of the United States. On Aug. 9, 1974, after serving for 246 days, he became the 38th president after Nixon resigned to avoid impeachment proceedings tied to the Watergate scandal. President Ford, who served for 895 days, was the first and only person to serve as vice president and president without being elected by the Electoral College.

President Ford, who was 93 when he died in 2006 at his ranch-style house in Thunderbird Country Club in Rancho Mirage, would have been 100 on July 14. And the occasion has journalists and those who were closest to the president and Betty Ford sharing their most resonating memories.

In May 1982, I interviewed and photographed Ford and his son, Steven, as they were shooting an episode of Dick Clark Productions’ Inside America on the golf course outside the Ford house. At the time, Steven was a regular cast member on The Young and the Restless. After the taping, Steven’s agent Sid Craig and I were invited for lunch at the Ford house. Betty Ford wasn’t feeling well and did not join us.

Craig, now president of the Police Advisory Board and chairman of the Human Rights Commission of Palm Springs, remembered when Gerald Ford asked him for a favor. “He’d been approached to be interviewed by Aaron Sorkin, who was doing research for The West Wing,” Craig says. “As a result, former Presidents Ford and Jimmy Carter and their chiefs of staff were interviewed, and several shows were written about their experiences. Twelve years ago, I asked him to put in a good word for me with the Palm Springs [International] Film Festival. Ford instantly said, ‘I‘ll call Mary Bono tomorrow. She owes me a favor.’ The next day, I received a call from a board member, and today I’m still serving on that board. He didn’t hesitate to give his help. He was that kind of guy.”

‘Some of the Greatest Times’

The younger Ford explained why his parents moved to the Palm Springs area after leaving the White House:

“Both Mom and Dad welcomed the move from Washington to Palm Springs,” says Steven Ford, who has appeared in films such as Black Hawk Down, Transformers, Heat, Contact, and Armageddon, but is taking a break from acting to serve a four-year term as chairman of The Gerald R. Ford Presidential Foundation. “Mom never wanted Dad in politics in the first place, and she was glad when his time in Washington was running out. He served 24 years in the House of Representatives, from Michigan’s Fifth District. Mom felt it was time to enjoy their life together. All that changed when Richard Nixon chose Dad as his vice president. I remember Dad saying to Mom, ‘Don’t worry, the vice president doesn’t have much to do.’”

The Fords moved to Palm Springs in January 1977. “We kids were gone, doing our own thing,” Steven Ford says. “My folks had vacationed in Palm Springs and loved the warm weather. Mom had pinched nerves in her neck, and warm weather made it feel a lot better. Dad liked playing golf and already had a lot of friends who lived there. They rented a house for a couple of years before choosing to build one on the 13th hole of Thunderbird Country Club.

“I actually started playing golf as a way to spend more time with Dad,” he continues. “Of the four of us children — Michael, Jack, Susan, and myself — I was with him the most his last 15 years, because I lived nearby, in Los Angeles. I remember how we’d sit three or four hours, in a golf cart, just telling stories. Those were some of the greatest times we ever had together. We’d go early in the morning, play golf, and then go back to the house to have lunch with Mom, and then hit the golf course again for the afternoon. Dad played golf until he was 91.”

The Fords seldom hosted outsiders at Thunderbird, but Steven recalls visiting the homes of some of the desert’s most iconic personalities.

“We once went to Ambassador Walter Annenberg’s home, where he gave us the most interesting tour of all of his artwork,” he says. “I remember dinners at Frank Sinatra’s house and once, when we didn’t have plans for Thanksgiving, we went to Bob Hope’s house for dinner and ate with his family and friends. Dad loved the way Bob Hope kidded him all the time; he really enjoyed that part of their friendship.

“Dad had a great sense of humor. He laughed as hard as anyone when Chevy Chase did his take-off of him on Saturday Night Live. In fact, they became good friends. Dad and Chevy did a program together, ‘The Humor in the Presidency,’ for The Ford Museum.”

The Ford family’s greatest — or certainly best known — legacy to the Palm Springs area is the Betty Ford Center on the campus of Eisenhower Medical Center in Rancho Mirage.

“Mom started taking prescription drugs because of the pinched nerves in her neck,” Steven Ford recalls. “We didn’t notice anything was wrong until they moved to Palm Springs. When Dad realized there was a problem, he found her a doctor who said she needed an ‘intervention.’ Nobody had heard that word in those days. Today, there are television shows about interventions. One morning, when Mom woke up, she found the whole family at the house for her intervention. It only worked because Mom was committed to it. She said it wasn’t anyone’s fault. Nobody caused it, and she took full responsibility for her drinking and prescription drug habit.

“She was so inspiring and unashamed to talk about it publicly,” he adds. “When she was approached to open the Betty Ford Center, she was apprehensive. She felt it would put a great deal of pressure on her sobriety. But the more she thought about it and heard how it would inspire and help people, the more she knew she had to do it. Finally, she agreed, but only if it would be nonprofit and available to everyone. She loved the clinic so much that she went there and taught for years. I think that became a part of her recovery.”

Today, Steven Ford spends at least 100 days a year on the road, working for The Gerald R. Ford Presidential Foundation, which increases awareness of the life and career of its namesake and promotes civic engagement. He also has been working in Grand Rapids, Mich., on the events that will mark his father’s 100th birthday.

To see into the heart of Gerald Ford, you need only absorb the words of his final public statement. A month before he died, he said, “The length of one’s days matters less than the love of one’s family and friends.”