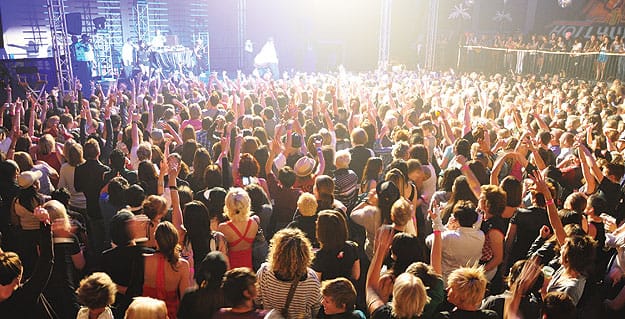 Call her a star maker — or just a super organized person who knows how to throw a great party. But promoter and LGBT activist Mariah Hanson makes things happen. Her annual girl-for-girl shindig, The Dinah, draws women from around the globe to the desert and takes over Palm Springs for five days every spring. This year’s festivities begin March 28.

Touted as the biggest gathering of lesbians in the world, this is a party that never rests. For more than two decades, Hanson has been building an empire that sparks careers and changes lives. Women in attendance have come to expect grand acts, such as The Pussycat Dolls (2006) and Pat Benatar (2008), and a slew of celebrities, who have included Kate Moennig of The L Word and Glee’s Jane Lynch.

In 2009, The Dinah’s impressive entertainment lineup featured then lesser-known Lady Gaga and Katy Perry, as well as lesbian staples The Indigo Girls, Margaret Cho, and Uh Huh Her. The following year, Hanson did it again, in spite of naysayers who claimed she “got lucky” with Miss Gaga. She booked a young hip-hop singer named Ke$ha, who went on to have five Billboard Hot 100 hits in her debut CD.

Hanson continues her talent-finding streak in 2012 with rising stars Anjulie, Nina Sky, Meital, and Rye Rye. For women craving more traditional headliners, The Dinah brings Chaka Khan and her full touring band to the stage Saturday night. And in a definite coup, the recently out Meredith Baxter goes one-on-one in an interview with comedian Suzanne Westenhoefer.

Describe the Dinah attendee.
She’s a savvy woman who lives life to the fullest. She’s adventuresome and ready for what’s next. Spontaneity and joie de vivre are her tours de force.

How has being a Palm Springs resident changed the way you view the city?
I never realized just how beautiful it was until I lived here — the fiery sunsets, the mountains, and the perfect climate. I’ve also become more interested in local politics. It’s a beautiful city and one we should make sure enjoys a vital downtown area. Keep those tourists coming!

What’s the economic impact of The Dinah?
I understand we are one of Palm Springs’ largest citywide groups and have proven to be recession-proof for the city. It’s critical to support not only the hotel industry, but also the local economy. I’m proud that my customers have an important impact on our city.

What’s this year’s must-do event?
Chaka Khan at the Palm Springs Convention Center Saturday night, for sure. Or Nina Sky at Riviera Palm Springs on Friday. Shoot, I wouldn’t miss anything. The lineup is killer
this year.

How do you keep it all going?
I drink a lot of coffee.