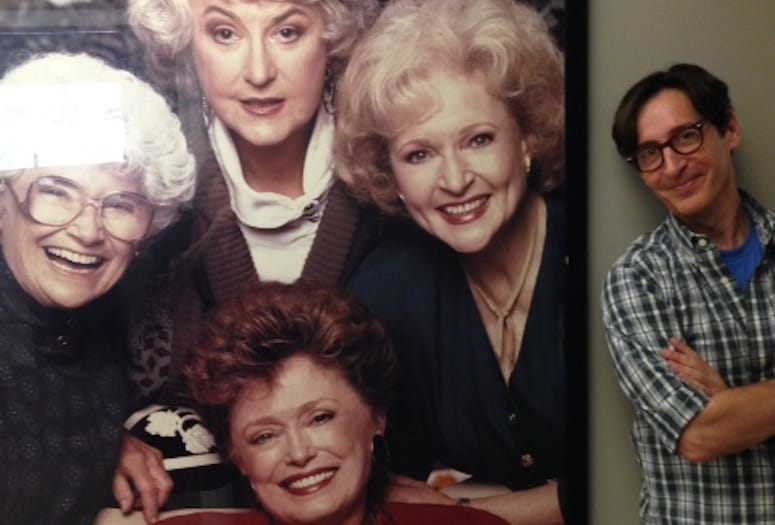 Editor’s Note: Stan Zimmerman appears June 24 from 7-9:30 p.m. at Oscar's Café in Palm Springs to reminisce about writing for The Golden Girls among other sit-coms. For tickets, click HERE.

You would hardly call New York City a go-nowhere town. But for the comedy writing team of Stan Zimmerman and Jim Berg, they needed to exit Gotham in hopes of landing their dream job.

Zimmerman was a struggling actor working in theater and casting, but it wasn’t paying the bills or fulfilling his aspirations. “I became so tired of being poor in New York,” Zimmerman says. “I always dreamed of working on a sitcom and living in Los Angeles. Finally, I told Jim, ‘I can't stand being poor here anymore, we need to move to LA if we're really going to take off.’”

Pretty prophetic, it turned out. Within two years, Zimmerman and Berg were hired to write for the opening season of The Golden Girls in 1985. “Luckily, our scripts got to the staff on The Golden Girls,” Zimmerman recalls. “They called us and we had a chance to pitch different ideas for some episodes. Fortunately for us, they liked one of them, and we wrote that episode. They liked it so much that they brought us on staff for Season One.”

Zimmerman would later receive a Writer’s Guild Association nomination for the episode, “Rose’s Mother,” on The Golden Girls. The duo would go on to write for many other TV series including Brothers, Fame, Hooperman, Something Wilder, Roseanne, Wanda at Large, and the fifth season of Gilmore Girls. Zimmerman earned a second Writer’s Association Guild nomination for the infamous lesbian kiss episode on Roseanne, “Don’t ask, Don’t tell.” 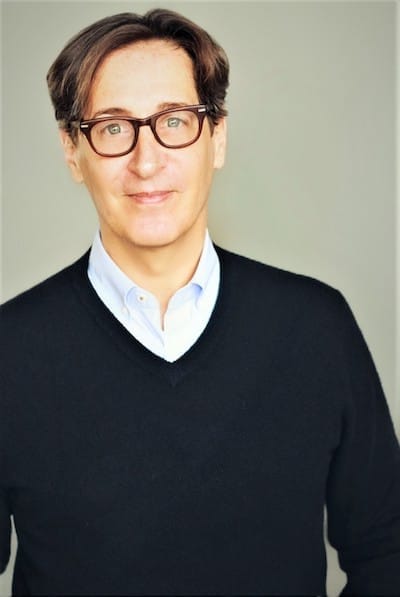 Palm Springs Life spoke futher with Zimmerman about his experiences, Palm Springs, and going from a closeted to openly gay comedy writer.

What impact did The Golden Girls have on your career?

The Golden Girls changed my life completely. I was very, very young, I was one of the first in my group who got a job that paid well that I was able to buy a house. Everybody who had ignored us as writers suddenly were asking to have meetings with us because of the huge success the show had right away. It opened so many doors for us.

What did you like best about working with The Golden Girls cast? Who was your favorite character in the show?

Well, I loved all of them. All the actresses were so special and unique. I think the show is still so powerful today, because they found four women who were the best of the best in the business. You don’t get any better comic actors than those four.

I have to say I will always be a Sophia fan. Right from the beginning, Estelle Getty took me and my writing partner under her wings, and we became fast friends, and remained friends after we were not writing on the show. I think she appreciated as well that I'm gay, and that I was a theater person. Her first love was always the theater. She never expected to be a sitcom star. She thought she would be doing little off-Broadway shows the rest of her life. She was a mom with two sons, and she would make them dinner, and then tell them, "Excuse me, I'm going to do an off-Broadway play, take the subway into Manhattan."

I've talked to her sons, and they would go to these plays, and they'd say, "Oh, my God, there's my mother in a bra on stage." She was such a lovely warm person. She was just a good listener and had a lot of good advice.

Which episode was your favorite?

Well of course I'm going to say my favorite episodes were the ones that I wrote. My favorite episode is probably the one that we wrote called “Blanche and a Younger Man”, or “Rose's Mother”. It has a nice combination of real heart, and also super funny comedy. There were just some really nice themes that we were allowed to touch. Things about mothers and daughters in that show. I really appreciated that about the series I wrote for. Like in the show Roseanne. We were able to write about real subjects in a real way, but we were able to be very funny and comedic.

What were the challenges during that first season? Can you give an example?

The challenges for us as writers on The Golden Girls was pretty much everything. We were very young. We were staff writers and knew the pressure. As soon as the show became a big hit, everybody wanted it to be the best of the best and it couldn't be just a joke, it had to be the best joke.

It was also very difficult being in the closet on the show, which people find that hard to believe. But back then our agents told us we couldn't really be honest about who we are. It was hard to work from 9in the morning till 2 at night. We were together the whole day and we had meals together. We had private conversations and shared stories, but I couldn't really share anything personal about myself.

You’re writing From Golden to Gilmore. When will that book come out? Did you discover something during your research that surprised you?

It will come out as soon as I stop talking to you and finish writing it - I'm joking. All my friends and my mother are bugging me, "Finish it. We want to read it."  But seriously, I hope at the beginning of next year it will come out.

The writing process is going fast, but it's very emotional to go back into your own life. It's also the hardest thing I've ever done, because it's not dialog. I have to write paragraphs about my past. Fortunatelly, I kept journals from college, so I'm pulling a lot of things from them. Those are very funny and sometimes embarrassing. The way I described my feelings back then. I wrote a lot during the Roseanne time. I think during The Golden Girls times I was so overwhelmed, and everything was such a new experience. I think what I learned was resilience. In any career you have peaks and valleys. Those valleys can be very depressing and scary. Being able to bounce back and climb the next peak over a long career can be hard. It was important to find different ways to reinvent myself.

You worked in TV during a time when you couldn’t talk about your sexual orientation. What was that time period like and did you ever feel like your employment could be threatened if someone found out?

I don't think I would have been fired if they found out, but we felt we would not be hired for other shows if people found out. It was mostly all white straight writers on the shows. I had read that Gary Marshall, on his shows, would take breaks from writing and go play basketball on the lot at Paramount. I thought, "Oh no, I can’t play basketball, how can I be a writer?" But it's like in the other businesses, what’s important is your job performance and it's about who you know. 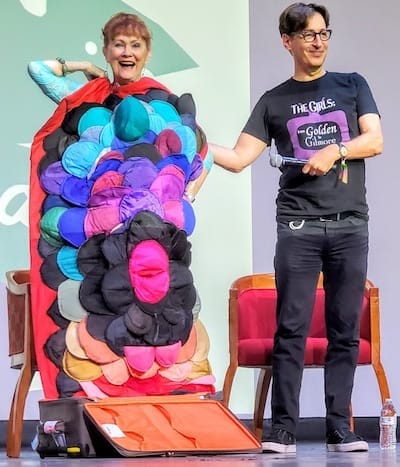 Stan Zimmerman with Melina McClanahan, sister of Rue from The Golden Girls cast during the Golden Fans at Sea cruise in early 2020. The blanket is made of Blanche's old shoulder pads.

I think we were under the assumption that if people knew that about us being gay, we wouldn't get future work. At a certain point I just didn't feel comfortable hiding it anymore, and we came out in the local Los Angeles newspaper. Coming out actually helped us, because we had a very unique perspective. I think people also respected us for doing it. They thought it was brave, but it was really just being truthful.

It opened up conversations and discussions. One time we were not in the room, we were off writing a script and one of the writer's assistants told us later that the guys in the room were discussing if they were gay, whom they would sleep with, my writing partner or me. I got the executive producer, so I thought I won.

There was another situation. On the Roseanne show, the executive producer didn't understand why my writing partner and I wouldn’t have sex in our office 24 hours a day. I said, “No, we're friends. Just because we're two men doesn't mean we have sex,” which he found hard to believe from an Ivy League graduate. But that's where their mind was at.

They didn't fully understand. That's the importance of coming out. That more people can understand what our lives are like when you are gay.

• READ NEXT: Ruta Lee Shares Her Times with Lucy, Sinatra on May 30 When She Inks Copies of Her Book in Palm Springs.