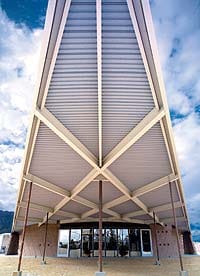 After years of false starts and ill-fated attempts at redevelopment, the famous former gas station designed by Albert Frey has finally reopened — this time as Palm Springs’ official visitor center.

Ideally located at Tramway Road and Highway 111 (it’s one of the first signs of civilization off Interstate 10), the renovated structure returns an icon to the city’s gateway and ends years of uncertainty surrounding its fate.

The new visitor center also bespeaks the midcentury modern architecture seen throughout the city. “It is a perfect example of adaptive reuse of a unique Palm Springs architectural gem,” says William Kopelk, president of the Palm Springs Preservation Foundation. “All associated with making this happen should be proud of showing how historic preservation can benefit the public and the building.”

Constructed in 1965, the gas station was one of nearly 200 Frey-designed buildings. The late Swiss-born architect, known for his detailing of the Villa Savoye, was particularly prolific in the 1960s, when some 500 modern residential and commercial structures surfaced throughout Palm Springs Valley.

“It was one of the building types that allowed exuberance — a billboard for the street, where the roof is a marker,” says Ana Escalante of O’Donnell & Escalante Architects, the firm that remodeled the structure. “Everything is radial. It works like mathematical equation. Each beam is a straight line with a starting point and an ending point at different heights.”

Frey, who also designed Palm Springs City Hall (1952) and Palm Springs Aerial Tramway’s Valley Station (1949), used steel, concrete, and glass to achieve energy efficiency in the gas station. The floor-to-ceiling glass on the south side heats the building during winter, when the sun is low on the horizon. Long overhangs facing north block the sun during summer.

During its heyday, it operated as an Esso station, recalls Sally McManus of Palm Springs Historical Society. When it closed, some city officials considered it an eyesore. In the 1980s and ’90s, the structure fell into disrepair, as midcentury modern architecture lost its luster. Many residents and newcomers moved to growing cities east of Palm Springs, and rustic Southwest and Spanish styles — a throwback to adobe style of the 1920s and ’30s — enjoyed a resurgence.

Meanwhile, developers eyed the Frey gas station property for residences in 1996. Bulldozers in place, the building was ready for demolition. “They wanted to put an office for their [development] project there,” Escalante says.

This inspired then-City Councilman and now Mayor Ron Oden’s first political stand to save the building. “Residents were starved for progress,” he says, recalling the battle between developers and preservationists. “The entire city seemed tuned into the controversy. People wore hats designed like the Tramway gas station.”

Developers eventually lost interest in the project, leaving the sructure boarded up and defaced. In 1998, Montana St. Martin and Clayton Carlson of San Francisco bought and restored it.

The building was designated a Class 1 historical site in 1999 and later opened as an art gallery. “It had been approved for Class 1 status in 1996, but the [city] council rescinded the designation,” says Peter Moruzzi, chairman of Palm Springs Modern Committee, which advocates preservation. “This time it stuck.”

The city spent $564,000 to renovate the structure to suit the visitor center. “It serves as a symbol of the nation’s largest cadre of modernist architecture,” Oden says.

Linda Fort, vice president and general manager of Palm Springs Bureau of Tourism, which operates the visitor center, says, “We hope to include graphics of the building in our promotions.”

With doors reopened, Frey’s legacy is helping Palm Springs can reconnect with its past.