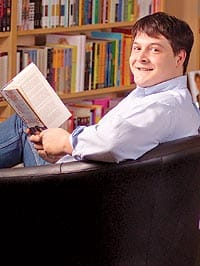 It used to be that all you needed from a bookstore was books. As long as you could find your bulky Robert Ludlum thriller or frothy Danielle Steele romance, why, a trip to Mickey Fine’s Rexall would cover the bases nicely and you could pick up some suntan lotion, too. Today’s book buyer is a bit more sophisticated, which means, above all else, they’d really like a comfortable place to sit … and a cup of coffee would go down nicely, thanks. Oh, and if possible, 10,000 handsome books.

Say what you will about Barnes & Noble and Borders corporate policies and steep discounts, the two major chains know something about customer service and have turned the book-buying experience into a destination event; a visit to either local outlet certainly proves this. Nevertheless, Palm Springs Valley has quietly undergone a sea change of unexpected note. Independent bookstores have begun to thrive again by catering to the one thing the chains have seemingly lost: a sense of character.

When Robin Rosenberg and Rosie Fiorentino purchased Celebrity Books in 2003, the store was little more than a used bookshop — albeit one with a prime location in the heart of downtown Palm Springs — that had carved a niche by hosting book signings during VillageFest and the occasional community event. Rosenberg and Fiorentino — coming from San Francisco, where independent bookstores like Stacy’s and City Lights have long been literary centerpieces — envisioned even more and set about re-imagining the store.

“We both love books, and we wanted to build a store where you felt that when you walked in,” Rosenberg says. This meant wholesale changes: They transformed a backroom that had been used for overstock into a homey sitting area more akin to a living room than a library and began filling the shelves with new books, highlighting fiction and biographies, both new and used. From their vantage point in the center of downtown, Celebrity Books has quickly become a meeting place for local and visiting shoppers, which is exactly what Rosenberg and Fiorentino wanted. “One of our goals has been to make this store a community for readers,” Rosenberg says, “and writers, too.”

The store attracts both local and touring authors to VillageFest autograph sessions — including novelist Barbara Seranella, photographer Michael Childers, and football legend Tom Flores — and boasts an extensive and interesting mix of new hardcover best sellers and handpicked favorites, alongside a lot of used and collectible books, including a collector’s dream wall of signed books by everyone from Ray Bradbury to Tom Wolfe.

While Celebrity Books has succeeded in making downtown a viable spot for book buying again, the latest entry in what is fast becoming a boulevard of books along Palm Canyon (including used bookseller G. Wm. Craig and architecture and gay culture purveyor Sublime) may also be the biggest competition yet for the chains down valley: Peppertree Bookstore and Café.

Located adjacent to the newly renovated Peppertree Inn, the brainchild of Chris Johnson is the second store in his burgeoning vision of a community bookshop with a national perspective (his first store is located outside San Diego). The shop features an array of trade paperbacks and a fine selection of hardcover new releases in all categories, but the main draw continues to be the political and pop culture author events, with visits from Deepak Chopra and Arianna Huffington among the recent highlights. But Johnson hopes for something even larger.

“It is only natural, given our location and the hotel, that people might come to see us as more than a bookstore,” Johnson says. “Especially when the café opens later this year, we hope we can become a neighborhood bookstore and a resource.”

To that end, Johnson has recently begun showing free films, focusing primarily on documentaries like The Last Days, the 1998 Academy Award-winner for Best Documentary, while continuing to personally select the books on the shelves.

“We’re not going to beat Borders’ selection,” Johnson concedes, “but what we offer is personalized service and real opinions. The person you meet at the counter of a big chain might have worked at the Gap yesterday and might not have any idea about what book you might like. We just might.” And his suggestion? You’ll have to drop by to find out. But be warned: there are comfy chairs and coffee within.