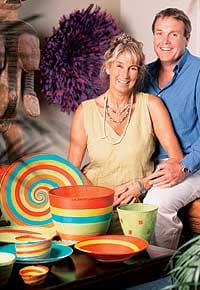 You don’t expect it. Amid the visual cacophony of jewelry, clothing, gadgets, and gewgaws that characterizes the College of the Desert Street Fair, a striking display of vibrantly colored baskets rivets you. You come closer, drawn by the bold colors, clean designs, and elegant shapes. And as you step into the booth, proprietors Nonie and Tom O’Reilly of La Quinta enthusiastically share the remarkable story behind their wares.

“They’re made of PVC-coated telephone wire,” Nonie says of the brilliantly hued baskets, bowls, platters, and vases. “And they’re woven by craftspeople in the KwaZulu-Natal region of South Africa as part of an empowerment program.”

KwaZulu-Natal is impoverished and devastated by AIDS. “It’s being run by children, with siblings raising siblings,” she continues. “The mothers are away in the cities, trying to find work, and their partners are working in the mines, or dead. The government had to do something to draw the adults back to the villages.”

Tom picks up the story: “Wire basket-weaving has its roots in the South African mines where workers and night watchmen would find off-cuts of wire and weave baskets to pass time. The Zulu ladies, who traditionally wove Ilala palm baskets, saw the wire and started to use it in their weaving. The government encouraged the effort and appointed people to run an empowerment program.”

Telkom SA, South Africa’s leading telecommunications firm, donates all the wire. Once a government entity, Telkom is now a publicly traded corporation with a nonprofit foundation that oversees the program. Various centers throughout the KwaZulu-Natal region work with groups of weavers,  providing raw materials, resources for education and support, and an infrastructure for marketing the crafts they produce.

There is a nucleus of about 30 head weavers, all members of the Zulu tribe. Each head weaver, in turn, works with 10 to 20 weavers in the field. Weavers generally visit their center weekly to pick up supplies, and they are paid by the piece. Baskets take an average of three to four weeks to weave, and each is unique. Some baskets retain the smell of the smoke from the campfires around which the weavers gather to ply their craft.

The O’Reillys represent a group of about 30 weavers who design baskets for the international market (other groups target South African markets).

The baskets gained international acclaim when Sotheby’s Contemporary Decorative Arts’ LOSA (London-South Africa) featured them in an exhibition in 2002 — the first collaboration between British designers and South African craft workers. Six designers were selected to spend a week with groups of craft workers in KwaZulu-Natal, studying their skills and exploring possibilities for new designs. Each designer responded with ideas for new shapes, finishes, and colors that they felt would appeal to a contemporary European market. The baskets that the O’Reillys sell reflect the local weavers’ interpretation of the Zen concept.

Today, the distinctive telephone wire baskets are marketed primarily through fine galleries around the world. Nonie concedes that when the South African program accredited her and Tom to sell the baskets in the United States, they weren’t entirely forthcoming about their Street Fair venue. It quickly became a non-issue, however,  as the O’Reillys have become the largest distributors of these baskets in the world. In addition to their booth at COD, they travel to regional arts and crafts shows. In fact, at a recent two-day event Santa Fe, Nonie sold out in the first half hour of the show and had to ask customers to leave their purchases behind so she’d have pieces to display.

“We feel privileged to work with this program and the individual weavers,” she says. “It’s extraordinary … the impact [the program has] had on people’s lives. For some, the family structure is reestablished because mothers can now stay at home and be breadwinners. An orphan gains a livelihood and recognition. The weavers also learn how to develop their craft into a business. And they’re being educated about AIDS at the centers.

“Best of all, we’re not breaking down their traditions and values,” she adds. “We’re helping them leverage their skills, their God-given gifts. It’s an extraordinary situation. We’re part of something exceptional.”