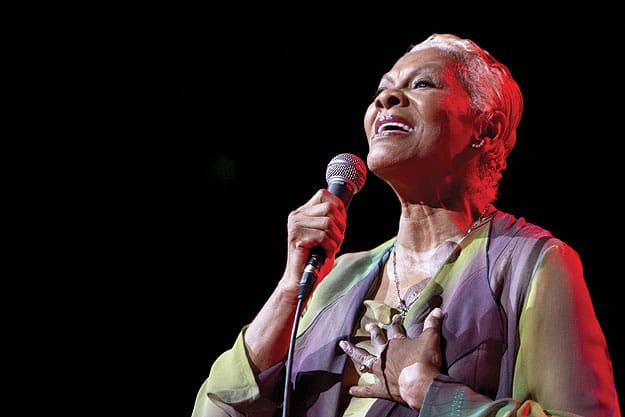 “I was always a big music fan,” Keys says. “I had a friend who’d come by and play the newest, hippest music. This guy had introduced me to the Supremes and some other big names back then. One day he puts on this record and says to me, ‘Have you heard this chick named Dionne Warwick?’ He puts on ‘Walk on By’ and I said, ‘Where’d you get that, man? How do I get in touch with this chick? What an amazing voice! I’ve got to meet her right away.’”

Keys met her soon after when he produced the first of Warwick’s two concerts at Lincoln Center in 1967, and the two have remained close friends for nearly 50 years.

“Oh, Gary is a real character, believe me,” Warwick says with a hearty laugh when told of Keys’ initial infatuation with her voice. “He is one unique man, he really is. A real character.”

Keys and Warwick will be featured speakers at the opening-night gala of the American Documentary Film Festival on April 4 at Camelot Theatres in Palm Springs.

Keys wrote and produced the 2012 documentary film Voices of Love: Whitney Houston and Her Family. This insightful, emotional film will be the opening-night feature. The film offers an intimate look into the wide-reaching musical history of Houston’s family, which includes the Drinkard Singers, whose tradition of gospel music helped introduce worldwide audiences to that musical genre in the 1950s and 1960s. Houston’s mother Cissy Houston (nee Emily “Cissy” Drinkard) was a founding member of the group, and Cissy’s sister Lee Drinkard Warrick, the mother of Dionne and Dee Dee Warwick, was the group’s manager.

The crux of the film is the incredible relationship this New Jersey family has had with each other and with Keys.

“It’s a big decision picking a film for opening night,” says Teddy Grouya, director of the American Documentary Film Festival. “This is an incredible documentary [with] some wonderful archival footage. There is great cultural heritage in gospel music over the course of the past 50, 60 years. The importance of gospel music to us has great, great historical relevance. The music is so important, and this documentary is an important work. Having Dionne Warwick here will be an honor. We will be able to talk with her about gospel music, and how it has influenced soul music and R&B over the course of the past half-century.”

Keys was the perfect filmmaker to create a piece about the Drinkards, as he has had an all-access, inside view of this most iconic American family for nearly 50 years.

And it all began simply, the day Keys heard “Walk on By” in his upper East Side New York apartment. Keys, a Detroit native who has lived in Manhattan his entire adult life, learned about the Drinkard singers after the first concert he produced at Lincoln Center.

“After the concert, I said to Dionne, ‘What’s next’? and she said ‘We’re gonna do some gospel music down at the Apollo, you should come along.’ So, of course, I wouldn’t say no to that. I told Dionne I wanted to shoot it. And that was where I met Dionne’s entire family and got to know the Drinkards.”

Creating a documentary about the Drinkard Singers had always been on Keys’ mind. “I’ve always wanted to do the Drinkard’s story,” he says. “It was always there. There were a few stops and starts, at one point waiting for Whitney to calm down a bit.”

Houston’s “calm period” came to a shocking, tragic end, when the talented singer died in early 2012 on the weekend of the Grammy Awards. Her death altered the direction of the film.

Keys is one of few filmmakers who treated Whitney Houston’s decline and demise with gentleness and tact. The film includes an email from Dionne Warwick to Keys on the weekend of the 2012 Grammys. Keys said this email had made him optimistic he eventually would be able to have Dionne, Cissy, and Whitney on the same stage. He envisioned this as a perfect ending to his film. It was not to be. Within an hour of the email, news of Whitney’s death was announced. Instead of capturing a live performance as the perfect documentary denouement, Keys filmed Whitney’s memorial service at her family church in Newark, N.J.

“Most people — especially since Whitney passed away — would have assumed any film done involving her would have been salacious,” Grouya says. “Mr. Keys really treated the entire subject respectfully. But the more I watched it, I realized it’s about so much more than Whitney. It’s about the entire family.”

Warwick, speaking from Los Angeles as the 2013 Grammys were airing, reflected on the events of the previous year’s Grammy weekend, but preferred not to discuss it. She did open up about her music and her history with Keys.

“I am very happy about the way Gary handled all of that,” Warwick says. “He was very sensitive to our family, and I think he did an excellent job. Gary’s film really represents who we are [and] who we were. We are all very, very close. We always have been.”

Of the hundreds of concerts he has seen and/or produced (including producing one of Warwick’s most famous at Carnegie Hall), Keys said the most memorable remain Warwick’s two shows at Lincoln Center. “At one of the Lincoln Center concerts, Burt Bacharach asked me if he could direct the band,” Keys says, still amused at such a question from a producer/writer/arranger of Bacharach’s stature. Bacharach wrote many of Warwick’s greatest hits. “So Burt Bacharach and his wife Angie Dickinson show up, and sure enough, Burt leads the band.”

“It was a big surprise for me when Burt Bacharach showed up there,” she says. “It was the first time he had been on a stage with me, and it was wonderful, it truly was.”

Warwick and Keys agreed another highlight of their long friendship was an epic show originally called The Rompin’ Stompin’ Hot and Heavy Cool and Groovy All-Star Jazz Show, which was shortened to The All-Star Jazz Show, with Warwick as MC. The Emmy-nominated show was filmed at the Ed Sullivan Theater and originally broadcast April 11, 1976 on CBS. It ran as part of the network’s Lively Arts for Young People series.

“It certainly was a long title,” she says, “and Gary felt it was the title it deserved and just wanted to keep it. It was so long ago, but I have great memories of that show, Count Basie, Herbie Hancock … and the highlight for me was when I got to sing with [jazz singer] Joe Williams. And Joe said it was a highlight for him, too, for us to sing together. I think Gary took a liking to me and asked me to be on that show with so many famous jazz players, because he felt I had the ability to adapt to all kinds of music and sing with any type of accompaniment. That show really was a who’s who of the jazz world. You name someone, they were there.”

Keys’ connections in the industry opened doors for him, as he wrote and produced documentaries about some of his musical heroes, including Count Basie, Duke Ellington, Max Roach, and Dizzy Gillespie. Keys has also produced major concerts by performers ranging from Simon and Garfunkel to Stevie Wonder to The Lovin’ Spoonful.

Keys still considers himself an old-time “jazzer” who enjoys the company of current players. “I have a drum kit and a baby grand, and a lot of people still come by and play,” he says, adding that his current project is a documentary about the life of Paul Robeson, an actor, singer, NFL player, and famous civil rights activist.

“Robeson was a fascinating man,” Keys says. “He was the first black to play Othello at the Met. His story is amazing.”

The story of Keys is itself fascinating and amazing, and his documentary about the Drinkard family — which also includes interviews and performances by Natalie Cole, Aretha Franklin, and Roberta Flack — is certainly a perfect example of the supremely talented company he has kept.