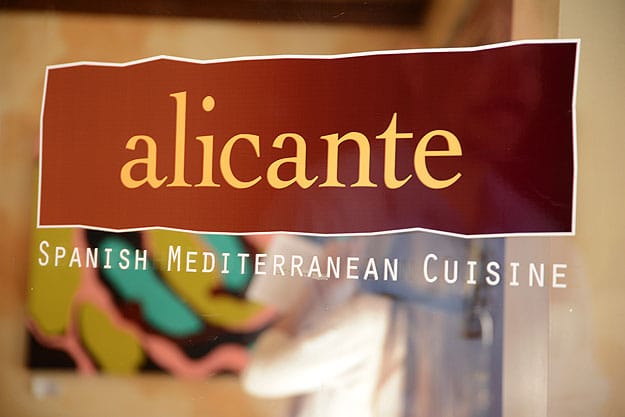 The Grand Opening of Alicante: Spanish Mediterranean Restaurant celebrated the new addition to downtown Palm Springs on May 22, 2013 and recognized restaurant owner Mindy Reed in celebration of “International Victorious Woman Month.” Reed, who also owns Zin American Bistro, was presented with a Certificate of Congratulations by Palm Springs City Councilmembers Ginny Foat and Paul Lewin on behalf of Palm Springs Mayor Steve Pougnet and the entire City Council, recognizing Reed's outstanding business and philanthropic contributions to the community of Palm Springs while overcoming major life challenges. “I feel really fortunate to be a part of the village of Palm Springs,” says Reed. During nine years in business, her two restaurants have served nearly 500,000 meals to locals and visitors to the city.

As part of the celebration, guests of the event raised $1,350 to benefit her AIDS LifeCycle event through Reed's donation of 25% of the proceeds from the evening’s dinners and 100% from a paid raffle. Reed is a third-year participant in the grueling 545-mile, 7-day bike ride from San Francisco to Los Angeles, and the money raised will go toward her ambitious fundraising goal of $15,000. Reed has consistently been among the top individual fundraisers, raising over $27,000 in the first two years of the event.

Alicante, named for the Spanish coastal city, whose cuisine is a combination of Spanish, French and Mediterranean influences.  The menu includes a carefully crafted wine selection with over 30 selections between $20 – $40 featuring predominantly Spanish, French and Italian wines, which complements a menu offering tapas and a variety of entrees inspired by this Spanish Mediterranean style.

For reservations call 760-325-9464 or for more information including lunch and dinner menus and the wine list, visit the restaurant online at http://AlicantePS.com.

For information or to make a donation to Mindy Reed’s AIDS LifeCycle fundraising efforts visit http://www.tofighthiv.org/goto/ZinChick.