The Greatest Athlete of All Time 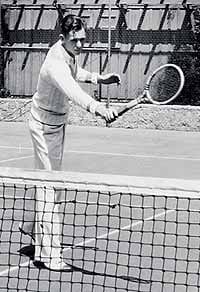 Tamarisk Country Club’s first head golf pro was an all-around athlete — an international tennis champion and golfing buddy and neighbor of celebrities and presidents. The remarkable story of Ellsworth Vines — documented in letters and interviews assembled by his son, ELLSWORTH VINES III — vividly recounts the four summers leading to his Wimbledon title, which catapulted the shy 17-year-old from obscurity to the cover of Time and the Wheaties cereal box as its first champion.

“They didn’t make a game he couldn’t play. He went to college on a basketball scholarship and he hit a baseball so hard his high school coach used to say it didn’t come down for two innings. For one given game, he was probably the best who ever played the game of tennis, his talents were raw power. Athletes from other sports have invaded the golf field but Elly Vines didn’t just join the pro golfers; he beat them.”
— Jim Murray, Los Angeles Times

Ellsworth Vines’ serve was so fast that an umpire at Los Angeles Tennis Club once said, “Go ahead and serve, Mr. Vines,” and Ellsworth said, “I already did.” The umpire turned to Ellsworth’s opponent and said, “Did Mr. Vines serve?” to which he replied, “I don’t know. I wasn’t listening.”

Ellsworth was 19 years old when he won the U.S. Open singles at Forest Hills. He also won Wimbledon on his first attempt (the queen was in the crowd), played on the U.S. Davis Cup team, and repeated as U.S. Open champion in 1932 (which earned him an invitation to the White House to meet President Warren Harding). When he turned pro, Ellsworth outmatched Bill Tilden and then beat Britain’s Fred Perry. In spring 1938, Ellsworth played Don Budge just after Budge had won the first Grand Slam. Six months into their tour, when Ellsworth was ahead in the matches against Budge, a group of his friends took him out to a golf course. Within a few weeks, he was down to a 19 handicap. Within a year, he was scratch. Within two years, he was a pro.

Ellsworth not only joined the pro golfers, he beat them. He played in the Masters and twice made the top 10 list of money winners. He simultaneously held course records at Lakeside, Wilshire, and San Gabriel country clubs.

In 1954, he became the head golf pro at the new Tamarisk Country Club on the outskirts of Cathedral City, where he built a modest home. Frank Sinatra built a home only two lots away — on the 17th fairway. Sinatra would raise an American flag next to his tennis courts to let friends know he was in town. And he frequently invited the Vines to his home and would show off his extensive collection of model train sets. He also built a helicopter pad so he could fly directly from the airport. However, Tamarisk’s board members vetoed Sinatra’s request to land his helicopter in the country club. Sinatra’s house was the only one with a fence around it. This was much appreciated by the U.S. Secret Service whenever President John F. Kennedy was staying.

Zeppo Marx, a seven handicapper in golf, built a house directly across from Sinatra’s, and a rumor milled that the crooner was building a tunnel beneath the fairway from Zeppo’s house to surreptitiously traffic women to Kennedy. Board members would likely have vetoed that idea, too. Zeppo’s wife, Barbara, later moved across the fairway and married Sinatra.

Danny Thomas had a house between Sinatra and Ellsworth. With his .38-caliber Smith & Wesson revolver, Thomas would shoot at targets across a street from his house that was later named Frank Sinatra Drive.

Red Skelton moved two houses to the right of the Ellsworths — along the 16th fairway. He landscaped a Japanese garden on one side and an Italian-style garden on the other. When he wasn’t admiring his collection of seven Rolls-Royce touring cars, Skelton would relax by pruning his gardens.

Marx’s brother Albert “Harpo” built a house behind Skelton’s with a stable of horses.

Things were relatively quiet around the neighborhood — except for Thomas’ occasional gunshots, the loud squawks from Skelton’s tricolored macaw, and the screams of the chimpanzee named Jossey, who was caged across from Skelton’s house.

When U.S. presidents came to town, they would ask Ellsworth to play golf. The Secret Service agents always had two golf bags, one having clubs and the other containing objects for other types of shots.

Ellsworth was the president of the PGA’s Southern California chapter and the U.S. National Seniors, as well as tournament chairman for the Bob Hope Classic and master of ceremonies for the Skins Game.

At age 75, he was interviewed by Tennis magazine at his then home in the shadows of the Santa Rosa Mountains. When asked about the story of the ghosts of La Quinta Hotel — about a solid 3-iron away, where regulars like Clark Gable, Carole Lombard, and Bette Davis were rumored to still prowl the grounds — silver-haired Ellsworth, who had known them all, laughed at the thought of it. “They haven’t said hello to me yet,” he said, grinning.

“Golf was a great challenge to me, and I was very competitive,” he said. “I like to play the other guy’s game and beat him at it. … No, I can’t really say which sport I liked best. I had a great time playing tennis. I traveled a lot and met the queen of England and the president of France, among others.

“I liked golf because each course is different, and from a social standpoint, I had a lot more rapport with the player in golf. Also, those old-time tennis officials were very strict.

“My greatest thrill in golf was playing in the Masters with Bobby Jones in the late 1940s. If I had it to do all over again, I don’t think I’d change much. I loved the life I lived.”

Ellsworth played with Presidents Eisenhower, Ford, and Reagan, and emphatically declared Ike the best of the bunch. Ike preferred to be called General, not Mr. President. “I played a lot of golf with him,” Ellsworth said. “He dictated the terms. He told you who you were going to play with and what your handicap was going to be that day. [He breaks into laughter.] You didn’t have a chance. He wanted to win all the time.”

Ellsworth Vines died Feb. 15, 1993. A week later, following his memorial service, two of his golfing buddies took his ashes from the Vines’ house. Early the next morning, a foursome of his closest friends was first on a private golf course cut into the canyons near his home. Shortly into their round, the foursome reached a tee high above the rest of the course. From there, they could see the emerald golf course below with its tiny greens and azure lakes. Past the course, Coachella Valley stretched for what seemed an eternity. They were at Ellsworth’s favorite hole.

“Crack,” the sound of a solidly hit drive echoed through the canyons as the golfers hit their tee shots. They climbed into their golf carts and drove down the steep path, feet pressed hard on the brakes. When they reached and hit their second shots, they drove their carts 20 yards farther, past a large sand trap. This was where Ellsworth’s ball usually lay. When they were sure no one was watching, one of the golfers pulled out a small shovel he had concealed in his golf bag.

Ellsworth’s ashes are buried about 280 yards from the tee in the center of the lush green fairway of his favorite hole. He was adamant about not being buried in the sand trap — he’d been there before.

For more information about Ellsworth Vines, point your Web browser to www.thegreatestathlete.com.