Six hikers shade their eyes and squint toward rocky folds and craggy outcroppings a few hundred feet away along the steep southern face of Oswit Canyon. A couple of them peer through binoculars, scanning the hot, dry, inhospitable hillside.

Although it seems just desolate desert, this neighborhood is deceptively vibrant. It’s home to a complicated ecosystem that includes lifeforms visible to the human eye if only it knew where to look. The hikers, thanks to experience enhanced by technology, know where to look, and what they see is the result of a 34-year effort: three Peninsular bighorn sheep munching the desert scrub, weirdly comfortable wedged among the nearly vertical, unforgiving rocks.

The two scientists from the Bighorn Institute and four lay supporters of its cause no doubt had been spotted by the sheep long before the favor was returned. A bighorn, explains wildlife biologist Aimee Byard, has eyesight eight times better than a human’s. She “glasses” the trio — science-speak for binocular scrutiny — and announces that one is Mary, a 13-year-old ewe that was born in the institute’s captive breeding program and, as a yearling, was the first such sheep to be released to the wild. Mary, as local media loved to report, eventually had a little lamb, prompting Byard to roll her eyes and wonder, “how long am I going to have to listen to that?”

Eleven times, it turns out. Mary, who’s elderly, has been a prolific breeder, and eight of her lambs survived to adulthood.

The hikers are lucky to meet this product of the tiny, slimly funded institute whose mission is to research and conserve a once flourishing species that had, by the time the institute was born in 1982, fallen to fewer than 1,200 in their full U.S. range from Palm Springs to Mexico. By 1996, there were only 280 Peninsular bighorns. In 1998, the U.S. Fish and Wildlife Service listed the species as endangered.

Marcus Nelson monitors telemetric equipment searching for signals from radio collars. The institute’s scientists can recognize individual sheep by the cracks in their horns. 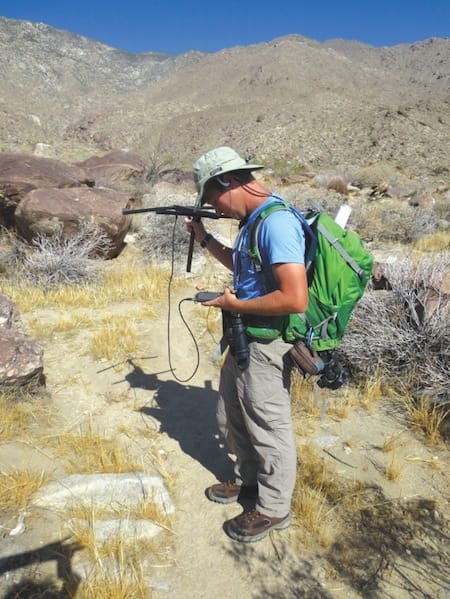 Today, the population is about 950 in nine recovery regions. The institute monitors three herds in three regions — the San Jacinto Mountains, which includes Oswit Canyon; the Northern Santa Rosa Mountains, on the flanks of Rancho Mirage and Palm Desert; and the Central Santa Rosas, near La Quinta.

“Mary is a big part of the success story of reintroducing animals to the wild,” Byard says. “We get to see the fruits of our labor.” That labor includes strenuous field work often performed in extreme conditions. In 2002, there were only four ewes in the San Jacinto herd; the recovery threshold is 25, which is about how many there are today, thanks to the work of the institute. Since 1985, 127 bighorns born or rehabilitated on its property have been released in two regions. “Sometimes,” Byard notes, “it takes decades to see the result of your work.”

The unfiltered biologist is a reporter’s gift that on this day is shared with the other hikers. Byard, associate director of the institute, has been there for 16 years and is as passionate about communicating its message to the public as she is about getting the science right. She and Marcus Nelson, her colleague today who’s responsible for the telemetry equipment that receives signals issued by the radio collars worn by captive-bred sheep, record where Mary and her two companions (who were born in the wild, and are not collared) were sighted, and what they were eating. This “incidental” sighting, Byard explains, differs from the regular field work she, Nelson, and the institute’s two other scientists collect through more granular observation rendering more complicated metrics.

VIDEO: View the bighorn in their natural habitat of the Coachella Valley. (Courtesy of Bighorn Institute on YouTube).

Each collared animal is assigned an individual transmission frequency and is identified by number; names are for laypeople. The scientists know about 150 animals so well that they recognize them by signature characteristics such as flared or cracked horns.

Byard offers a few gee-whiz facts during the intimate hikes (limited to 10 institute “members”) in order to hold a curious hiker’s interest when the sheep don’t show (or the lesser humans can’t trace their signals):

• Scientists in the field (and member hikers) don’t wear white, which is nature’s color of alert, as the white butts of fleeing sheep signify to herd members that follow.

• Bighorns are not picky eaters — they even eat thorny cactus and cat’s claw, as well as oleander, an ornamental non-native poisonous plant.

• In summer, bighorns can go three days without drinking; in winter, it can be months.

• They are adept hill-and-rock climbers thanks to split, concave hooves with spongy soles that enhance grip.

Byard isn’t shy about discussing the human pressures stressors that hold Peninsular bighorns hostage to their precarious existence. The day before this May hike, another lamb had died in La Quinta, bringing the known casualty total to five for this season. Sheep are attracted to the landscaping and water of golf course refreshment which, for them, is like a bighorn buffet table. But suburbia is not their natural habitat, and its perils include respiratory disease, traffic, and dogs. “Sheep need to be remote from urban areas, and encroachment,” Byard emphasizes. News clips of lambs gamboling down a SilverRock fairway are clickbait, but they can presage calamity. 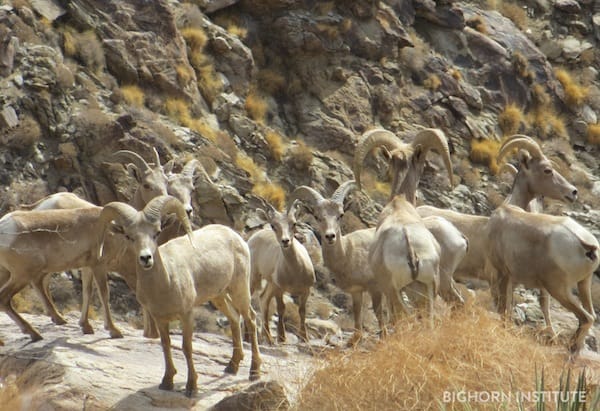 The group discusses the proposed residential development of 160 homes here, at the mouth of Oswit Canyon. Three days after this hike, the developers backed off, but their intentions remain unclear, as does Palm Springs’ commitment to protect sheep-adjacent land.

Growth wars rage, but some battles have been won. Byard recalls the 1990s, when residents of Thunderbird Cove were upset about bighorns that not only treated their painstakingly groomed yards as fast food outlets, but left a postprandial mess. Traffic along Highway 111 had killed several sheep, but residents still deemed the institute’s proposed fencing unacceptably unsightly. Opposition eventually was overcome, fencing was installed, “and now everyone loves it,” Byard reports. “And there have been no sheep deaths [resulting from human interface] since.”

The presence of a couple sheep eluded the hikers until the biologists identified their position and later enhanced this scope photo. 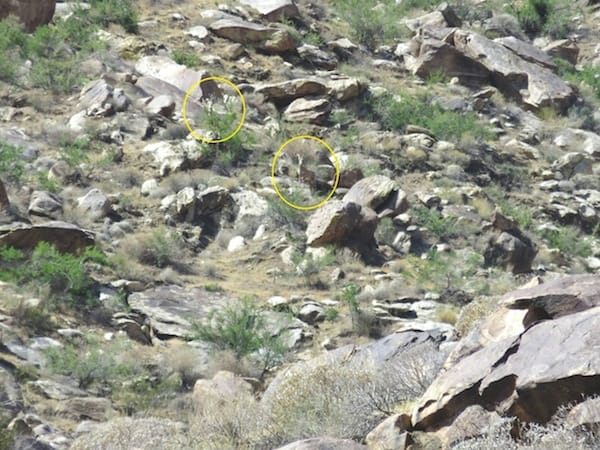 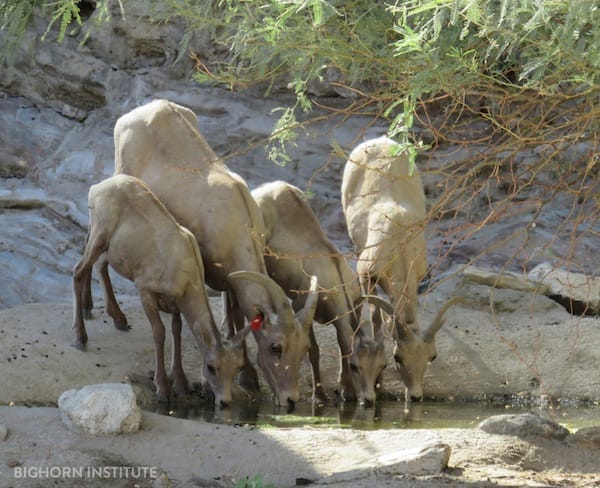 In winter, bighorn sheep can go months without water, but are exposed and vulnerable when they visit watering holes because predators await.

Administering a captive breeding program, conducting research and lab work, and helping raise public consciousness is a tall order for the four biologists employed by the Bighorn Institute. The nonprofit is permitted and overseen by the California Department of Fish and Wildlife and the U.S. Fish and Wildlife Service, and is subsidized by individual contributions, public sector grants, private foundations, and the proceeds from an annual tournament at Stone Eagle Golf Club, just down the hill from the institute’s 300 acres off Highway 74 in Palm Desert. Money is always tight, as represented by modest digs.

Byard introduces the institute’s headquarters with a Vanna White sweep of her arm: “This is where all the magic happens,” she says of the double-wide trailer. It houses offices, a lab, kitchen, and showers the biologists use when they return from the field after conducting surveys or clearing brush from a water source.

The property includes a biologists’ residence and a temporary trailer, and the whole spread must remain as free as possible from contamination from field-born pathogens and man-made noise. The institute supplements the captive sheeps’ natural desert diet with alfalfa grown in a region near Mexico so remote that no domestic livestock live in proximity.

The careful protocols are necessary, Byard explains, because not only must disease purveyors be stopped, “You don’t want the animals to become habituated to things they won’t find in the wild [once they are released].” Institute property replicates as much as possible conditions the sheep will encounter in nature, so there’s no veterinary service here — as much as possible, the animals must live as they would were they not confined. If a sheep, say, is bitten by a rattlesnake, it either recovers on its own (as most adult animals do), or doesn’t (lambs generally succumb). 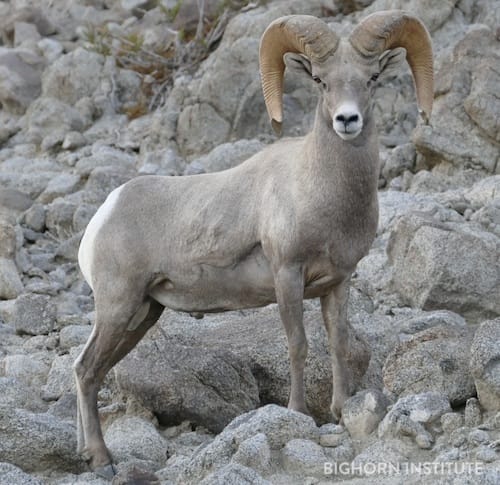 Visitors are unwelcome, and incursion onto institute property is trespass. As Byard says, “This is not a zoo.”

The original 400-yard buffer from the nearest residential development, the exclusive Bighorn Properties (named for the native animal but unaffiliated with the institute) is at risk of being nearly halved by a new development the city of Palm Desert approved for two mansions and their amenities within 240 yards of where ewes give birth, a relatively protected nook they choose for their maternity ward.

Byard is concerned about encroaching development. If you are a bighorn lamb whose first world view is forged by humans, you’re not likely to become a viable member of a wild population that desperately needs you to procreate.

Survival is a skill that human interference can compromise. The institute is helping us understand how.