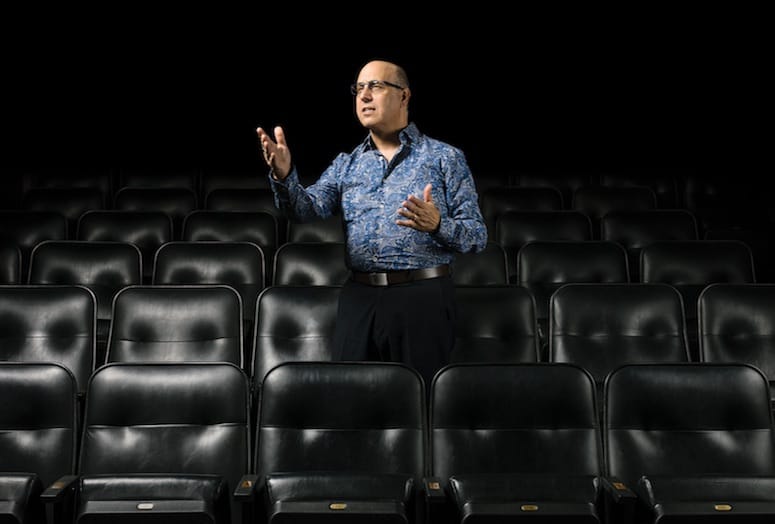 With daring plays like this season's opener, Venus in Fur, CVRep artistic director Ron Celona continually challenges his audiences and makes them wonder what he will do next.
PHOTOS BY LANCE GERBER

When can a fledgling theater company call itself a success? When it performs on its own stage? Becomes a full-fledged Equity house? Grows an audience beyond its physical capacity?

By these measures and others, Coachella Valley Repertory Theatre has crossed the goal line and distinguished itself among theaters in the Coachella Valley. Aside from its theater staff, the company has a conservancy employing 10 instructors. It attracts different audiences for its jazz and classical music series. Its impending purchase of the former IMAX movie theater in Cathedral City will expand seating capacity from 86 at The Atrium in Rancho Mirage to 220 at the new Carol Channing Playhouse, anchoring the downtown entertainment district.

CVRep isn’t alone in its desire for space. Dezart Performs, which produces plays at Pearl McManus Theater at Palm Springs Woman’s Club, is raising money for a new home, and Desert Theatreworks moved from Arthur Newman Theatre at the Joslyn Center in Palm Desert to Indio Performing Arts Center.

“I know my timing is right because I had two other companies,” says CVRep artistic director Ron Celona, who founded American Musical Theatre Repertory in Los Angeles before launching the Joslyn Players. “We’re going to build a state-of-the-art playhouse.”

As rehearsals for the company’s youth outreach performance, Bully, began at the beginning of the season, Celona talked with Palm Springs Life about the importance of owning your stage, interacting with schoolchildren, and asserting diverse programming.

Palm Springs Life: Why does a company like CVRep need its own theater?
Ron Celona: In the first two years, before we moved into The Atrium, we used outside venues. We moved because we didn’t want to be under any other organization. The actors can’t say things they need to say and do what they need to do. Having our own home allows us to do what we want. We did our homework and found this building, which was 90 percent empty. 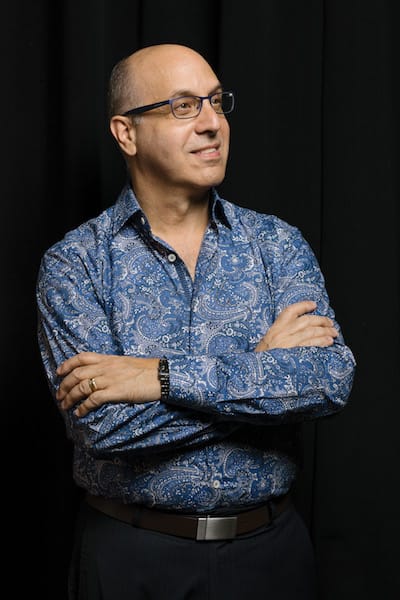 CVRep’s primary role is to entertain, but artistic director Ron Celona has his pulse on the community and makes education a significant part of the theater’s mission.

PSL: CVRep’s footprint in The Atrium has grown over the years.
RC: In the third year here I rented additional space. I needed a bathroom for the actors — that was an Equity requirement — and we needed office space. An angel came to us, Doug Bell. He heard or read about what we were doing, and he came in and said he’d come in on the weekend with his workers [from Bell Construction], and he built this theater. For nothing. He built the box office, stage, risers, and the sound booth. He got the permits and did everything. Our set designer Jimmy Cuomo [Emmy Award winner for Pee Wee’s Playhouse] built the temporary walls, offices, and the producer’s room. Eventually, I rented more space for the conservancy. We’re an educational institution, too.

PSL: What distinguishes CVRep’s theatrical programming for its adult audiences?
RC: Last year we produced Disgraced, which was about Muslim-American relations. I try to challenge our community with topics not necessarily in their comfort zone. This season [Edward Albee ’s] The Goat, or Who is Sylvia? [March 7–April 1, 2018] is going to challenge boundaries of what people think is acceptable and taboo in their world.

It’s the artistic director’s job to have the pulse not only of their community, but also of the national movement. I go to New York every year in June and see everything in 10 days. I have to know the most current American theater. I also like The [Old] Globe in San Diego, La Jolla Playhouse, and the Diversionary Theatre, the LGBT playhouse in San Diego. Entertainment is mainly what a theater does, but my mission is to educate.

PSL: What kind of impacts do you see when children experience live theater?
RC: [CVRep board chairman] Gary Hall helped me understand that youth is the best way to start. Most of the kids have never seen a live performance. The first production was at Indio Performing Arts Center. It was a play called Our Dad is in Atlantis, and it was about immigration. It was about two Mexican boys trying to cross the border into the United States. It ended with them at the border in the desert. We always have questions and answers after the performance, and some of the kids spoke right up. They had their own stories. They related to the characters, scared as the coyotes howled in the night. We had social workers there. The students’ response inspired me. I saw there’s a need in the community for this. We could generate conversation and awareness of an issue and give kids a chance to talk about their own experiences.

PSL: This year you presented Bully.
RC: Right, our first touring show: 10 schools in two weeks, reaching more than 3,000 students. It was written and performed by Lee Kaplan, who’s a New York–based actor. He grew up in the South and was one of five Jewish families where he lived. He was bullied as a kid for being Jewish and he wrote about his situation as a 12-year-old boy. He won a journalism scholarship to Syracuse, but he wanted to pursue acting and theater.

During the interview, Kaplan, arriving for rehearsal, enters Celona’s office and talks about how students responded to previous performances:
“Something in them is liberated and they’re able to talk about what they’ve been through. A young girl stood up after one performance and said she’s bullied because of her weight. The entire audience applauded her. I told her to remember what it feels like to have a whole audience of people cheering for you. These kinds of experiences are important so they don’t stay silent.”

March 7–April 1
The Goat, or  Who is Sylvia?
A man turns his ideal family life upside down when he announces he’s in love with a goat.

April 25–May 20
2 Across
Two strangers board a train in San Francisco and change each other’s life on their 80-minute ride.

RC: They’re sharing their own life experience in school, either being bullied or owning up to being a bully. If we save one child from going down the path of being a victim or a bully, then we’ve done our job.

PSL: CVRep’s summer lineup included classical and jazz music series. How do you characterize the programming?

RC: More than a theater company, we’re a performing arts institution with several components: contemporary dance and tango, classical and jazz music, and plays. We’ve always had a cabaret series. Jazz has a built-in audience, and we have a jazz series throughout the season led by Bill Saitta. Over the years we learned not to do plays in December, so this year we’ll have Christmas jazz; we’re bringing back a one-person play, The Life and Times of A. Einstein, by popular demand; and we’ll have our first gala, called “Twisted Broadway,” on Dec. 13.