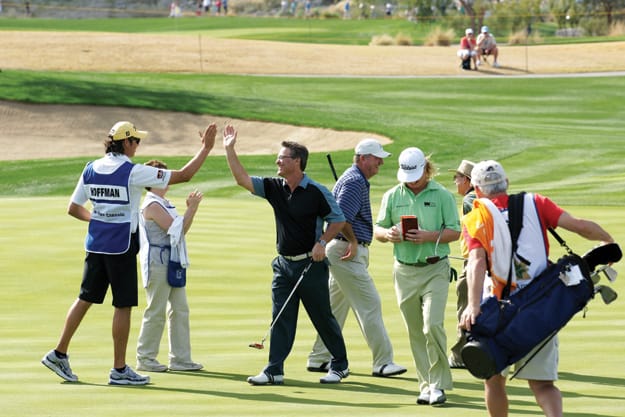 Like the rise of winter’s Bermuda grass, PGA Tour golf returns to the Coachella Valley Jan. 16-22, with a fresh look and a vibrant new presence.

After a 52-year run as various incarnations of the Bob Hope Classic, the venerable tournament was renamed and reshaped as the Humana Challenge last year. The Louisville, Ky.–based health care giant signed an eight-year agreement to become the event’s title sponsor and will work in partnership with the William J. Clinton Foundation. Played as the Bob Hope Classic since 2010, the event operated for the last two years sans a title sponsor.

While changes are in store for the former Hope (which grew from the Thunderbird Invitational first held in 1952), the Humana Challenge will pay homage to the luminary comedian’s legacy. Among the tributes, the winner will receive the newly coined Bob Hope Trophy and the nexus of the tournament at PGA West headquarters will be Bob Hope Square. A new USO Club will serve complimentary meals to military families.

In the weeks leading up to the event, tournament fervor in the desert reaches near-palpable proportions. “There’s just an enormous amount of enthusiasm in the community,” says Larry Thiel, chairman of the Humana Challenge. “I sense it all the time when I’m out talking to different groups.”

The enthusiasm extends to those who walk inside the ropes: “Having been out on tour at the end of the season, I talked with a lot of pros at different tournaments, and I can assure you that the professionals are incredibly pleased with the changes that we’ve made,” Thiel adds.

Departed is the five-day, four-course format that long distinguished the event, replaced with a four-day, three-course formula that Humana brass and golf experts believe will re-establish a marquee playing field. Gone from the course rotation is SilverRock Resort in La Quinta, which had been part of the tournament since 2008. Arnold Palmer Private and the Jack Nicklaus Private courses at PGA West and La Quinta Country Club remain.

The golf groupings also reflect the tournament’s reshaping, featuring a mirrored match of 144 professionals and 144 amateur participants — a tally that increases the pro field by 16 players. In previous years, the field sported 384 amateurs, compared with 128 tour pros. The fourth and final Sunday round will feature only professionals.

“In the past, we would have three amateurs playing with one professional,” Thiel says, noting that the celebrity element remains a formidable part of the week. “The new format is one where one pro plays with one amateur in a foursome. So as an amateur, by week’s end, you’re playing with six touring professionals.”

A thematic change concurrent to the on-course revamp involves bringing a message of health and wellness to the valley. Former President Clinton is scheduled to give a keynote speech on the Tuesday of tournament week. The presentation serves as the first-ever national conference on the subject matter.

“He has a major commitment within the arena of health and wellness to address the needs of the youth in our society,” Thiel says of Clinton. “He believes that,  just like in our adult world, there is an ever-growing level of obesity with young people.”

The promotion of healthy living will also be seen in the form of balanced eating choices, offered at concessions stationed by 14 prominent valley restaurateurs.

Visit www.humanachallenge.com for tickets and information.