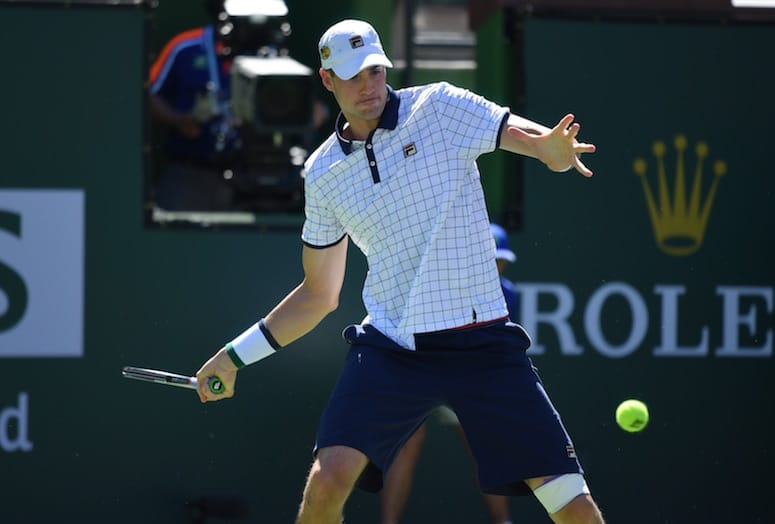 At 6-foot-10, American John Isner can launch a serve clocked well past 100 mph. He knocked off Mikhail Kukushkin of Kazakhstan Saturday.
PHOTOS BY RAY GIUBILO/MIKE FREY

If you like your tennis fast and furious, especially the serving part of the game, the BNP Paribas Open at Indian Wells was the place to be Saturday.

On a hot and sunny, near-perfect day in the desert–which seems to be the very definition of this annual March tennis spectacle, Ivo Karlovic and John Isner were out there hitting bullets. Thankfully they weren’t on the same court. For spectators, that could have been life-threatening.

Their height makes the serves appear to be descending from a ball-launcher in a helicopter, rather than from a tossed ball and a racket swing. Returning it involves first finding it. Think of it as a speeding needle in an exploding haystack. Both are capable of hitting serves approaching 150 miles an hour. Isner has the fastest serve on record on the tour, 156 miles an hour. That was last February in a Davis Cup match.

Did he believe the speed gun on that one?

The last time either even pondered hitting a first serve less than 100 miles an hour was when they were in grade school. Karlovic just turned 38, Isner will be 32 next month. 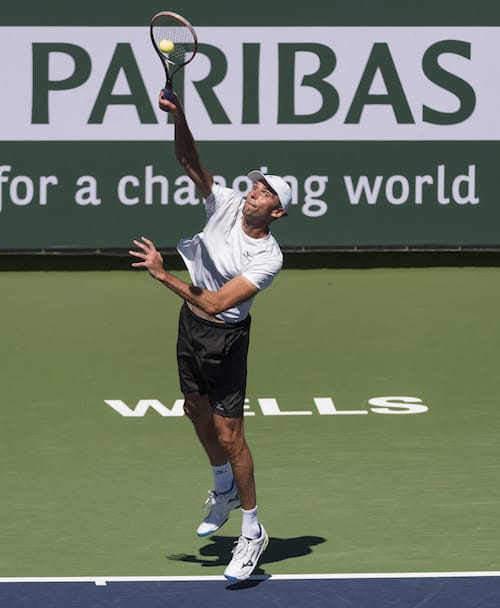 Coratia’s Ivo Karlovic, ranked No. 21, lost in straight sets to Japan’s Yoshihito Nishioka, who is ranked No. 70.

It is best to witness their matches courtside to truly appreciate them. Each is about 82 percent arms and legs. Their opponents, in a game that thrives on footspeed, are almost always quick as cats. Karlovic and Isner are about as quick as cell towers. Apple is missing a great marketing opportunity with these two. Think of it. Longer phones branded for Ivo and Isner. The iBods.

Their respective matches Saturday had an additional storyline, beyond the usual David and Goliath themes. Karlovic, of Croatia, faced Yoshihito Nishioka of Japan. Nishioka was what is known as a lucky loser. That meant he went through the qualifying to get into the main draw here, failed when he lost in the last round, and then made the show when another player withdrew. Interestingly, that is exactly how Mikhail Kukushkin of Kazakhstan ended up facing Isner. He, too, was a lucky loser.

Nishioki, 17 years younger at 21, not only gave up 49 ranking spots to No. 21 Karlovic, but also 16 inches in height. When they shook hands after their match, the 5-7 Nishioka’s chin came to about Karlovic’s breast plate. And, as David in this matchup with Goliath, he was out-powered from the service line, 12 aces to 2. But in this match, Karlovic died by the sword, with eight double faults. Nishioka won the match in a 6-4, 6-3 upset. Praise to the slingshot.

“The only way I could do it,” Nishioka said afterward, “was to make sure that, when I got that one chance in a game, I took it.”

The “one chance” meant a second serve. Incredibly, Karlovic won the point on his second serve only 44 percent of the time.

The Isner match was different. Goliath won, 7-6 (0), 7-6 (6). The victory was not a surprise. Isner is seeded 20th here and Kukushkin is No. 90 in the rankings. The match was business as usual for Isner, who plays as many tiebreakers as anybody on the tour, no matter who he is playing.

This was Isner’s third victory over Kukushkin on the tour. They have played a total of eight sets and six of them have been tiebreakers, five of those won by Isner.

“Yeah, that’s the way I play,” Isner said, which meant he knows full well that it is nearly impossible to break his serve, but that he doesn’t break the other guy’s much, either. Media wags have often advocated that all Isner matches should skip the early games and go right to the tiebreaker.

Isner was asked if, because of their similarity of style, it was fun to play Karlovic.

With big-servers like these two, the preliminary stuff before tiebreaker time is just window dressing.

Height may lead to serving greatness, but slowness of foot leads to problems returning serve.Isner and Karlovic have something else in common: record-length matches.

Isner played the classic and memorable Wimbledon match against Nicolas Mahut in 2010 that went 11 hours and five minutes over three days, the longest tour match ever. Isner won, 70-68, in the fifth set.

In the first round of this year’s Australian Open in January, Karlovic won a first-round, five-setter that took 5 hours and 15 minutes, and set an Aussie record for fifth-set length at 2 hours 37 minutes. He won that final set, 22-20.

Ivo and Isner. What a pair. Big serves, slow feet, lots of tiebreakers, plus record-setting long matches. So many similarities that history has joined them at the high hip.