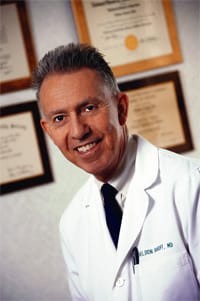 A moment of witnessing death led Dr. Sheldon Baroff to a career in helping people at the beginning of life.

In the months between graduating from Dartmouth College and starting his medical training at Philadelphia’s Jefferson Medical College, Baroff became a hospital volunteer and was assisting in the emergency room when four patients were rushed into the hospital after a car accident.

"One of the four patients was told to wait because he only had a leg injury," Baroff recalls. "He was young and strong, in his early 20s. But soon he was becoming incoherent and not very lucid."

Baroff sought assistance from emergency room doctors, who told him to "go away." The patient died from internal bleeding due to a leg fracture before it could be treated. Baroff’s memory of the incidence serves

as a turning point for his 30-plus years as an OB/GYN doctor.

"I felt that if I was going to commit myself to any professional endeavor and I had a choice of which patient I would feel most connected to, it would be women," he says. "And motherhood is such a selfless and important part of the existence of humanity."

With a career that has taken him from New York, Northern California, and Los Angeles to his current private practice, La Quinta Women’s Care, Baroff has witnessed the evolution of technologies that make his work more successful and consistently interesting. Some of those advances come most directly in vaginal hysterectomy, an area in which Baroff has worked since his residency and now specializes.

"Vaginal hysterectomies are so much easier for the patient to recover from, as opposed to the abdominal approach with an incision," he says. "The technological advances in surgery make it easier to bring the uterus out with care and caution through a minimally invasive opening. Patients go home in 24 hours instead of days."

Arriving in La Quinta in 1998, Baroff had expected a change of pace from the stresses of Los Angeles. But, he admits, he had a "complete naïveté that this would be a sleepy town." As La Quinta paces the Coachella Valley’s growth, Baroff embraces the demands of his work, being on call for all three desert hospitals and serving as medical director for Women’s Health Services of the Coachella Valley.

While passionate about his work, he keeps up a different lifelong love: music. Having learned piano at the age of 3 and majored in music at Dartmouth College while taking pre-med classes, Baroff enjoys playing jazz and classical piano. He also sang with the San Francisco Symphony Choir during his time in Northern California.

"My piano has been in storage for [longer than] a year while my new house was being built. I’m looking forward to

getting it back and playing," he says. "Music and medicine have always been intertwined in my life."

Perhaps that combination of art and medicine provides the dual essence of what makes Baroff an outstanding doctor: The creation of music parallels the creation of life.

"Why not do something that is so close to humanity?" he asks. "Birth is a happy time, and being a part of it … there’s nothing else that compares with it."