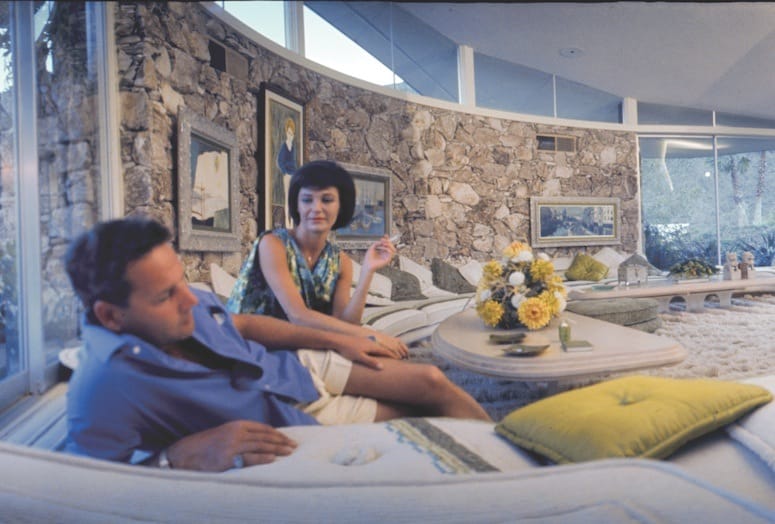 Bob and Helene Alexander, in a photo from a September 1962 issue of Look magazine, relax on the 64-foot built-in banquette sofa in their living room. Their estate, then dubbed the “House of Tomorrow,” is now known primarily as the Elvis Honeymoon Hideaway.
Photos by Palm Springs Historical Society and Palm Springs Life Archives

Sunday, Nov. 14, 1965: a day when modern architecture was not yet time-stamped “midcentury” and “the Alexanders” referred not to houses but to the visionary family who built them.

Modernism was in its heyday. Albert Frey’s Tramway Gas Station had opened, its soaring roof a dramatic entry statement to modern Palm Springs. The city had doubled its population in only a few years, and Mayor Frank Bogert credited builders George and Bob Alexander for the breathtaking expansion.

Back in 1957, the father-son team played a speculative hunch and built an ultramodern, middle-class tract in staid Palm Springs. The houses sold as fast as they were built. Soon the Alexanders’ stylish subdivisions outshone the city’s stately Spanish Colonial neighborhoods. Primarily designed by William Krisel, the sleek structures were elegant and affordable, bringing mod to the masses and luring thousands to the desert. The Alexanders’ drive and derring-do not only made Palm Springs a more inclusive city but also modern in look and buoyant in outlook.

The Alexanders were on a roll that Sunday in 1965. But destiny was about to close their glittering chapter in Palm Springs history, only to open, as if by wizardry, a magical sequel decades later.

It began with rain. As water spotted the wall of windows in Bob Alexander’s Vista Las Palmas residence for the first time, the 40-year-old speculator couldn’t have been pleased. Damp didn’t sell houses — especially on a Sunday morning at the start of the season.

No doubt Alexander’s spirits would have lifted had he surveyed the boomtown below, a realm where he and his wife, Helene, hobnobbed with the famous and befriended the less fortunate: A gardener was as welcome as Dinah Shore at their gracious parties. Bob served as president of the Desert Circus. Helene volunteered in the Desert Hospital auxiliary. They were the cynosures of the city’s eyes.

In that month’s edition of Palm Springs Life, Bob’s picture was featured in an ad for a fashion store with a caption that read: “Bob Alexander, Alexander Construction Co., builders of fine quality homes, knows the importance of good appearance.” A few pages later, Helene’s stunning image graced the society section.

Look magazine once ran a hyperbolic photo spread celebrating the Alexanders’ “Way Out Way of Life” — he racing to work in a powder-blue Jaguar, and she frolicking with her friend Barbara Marx (later Sinatra) across their backyard brook.

“She was a knockout; he was charming,” adds architect James Harlan, an Alexander expert. “They were rock stars.” Bob Alexander, sporting “desert casual” on his way to work, became a national celebrity after an eight-page article in Look magazine hit newsstands.

No wonder 13-year-old Jill Alexander considered her parents royalty. Despite their social whirl, Bob always found time to take his princess waterskiing, and Helene taught her how to craft and sew. Bob even named a cul-de-sac in Sunmor Estates “Jill Circle.” For all their prominence, the Alexanders were down-to-earth.

That Sunday, Bob, Helene, and his parents were to don their jet-set wings. They were invited to Palm Springs’ International AeroClassic show. Afterward, a Learjet would whisk them to Burbank for a party, then they’d return them for a Monday meeting in which they would assume full ownership of the famous (but fading) Racquet Club. Bob Alexander (left) poses with an unidentified man in front of the Desert Inn.

It was also Krisel’s 41st birthday, and he was in the midst of reimagining the Racquet Club. Long before Indian Wells Tennis Garden, the Alexanders envisioned a championship facility for Palm Springs. Bob was keen on the project because his wife and daughter were avid players.

According to Krisel, Alexander secretly built the “House of Tomorrow” for Helene and Jill, knowing full well his wife didn’t care for modern design. But the developer had a sales plan. As construction ended, Bob brought Helene to the site, ostensibly to show off his foray into experimental homes. Her reaction: Why be stuck in a tract house when they could live in a home like this?

The family moved in soon after. Along with his son, George Alexander built the famed “Alexander homes” in South Palm Springs, a location not considered fashionable at the time.

Late that November morning, Bob and Helene left their Space Age castle (which later would be known as the Elvis Honeymoon Hideaway) for the air show. Jill stayed home with the housekeeper. Rather than watch planes in the rain and attend a boring party, she snuggled with her books and The Beatles.

When the Alexanders arrived at Municipal Airport, they found only 3,000 spectators shivering in the grandstands. The fledgling airfield had no passenger terminal or tower yet. But on one of the two runways, Bob’s friend Robert Prescott, owner of Flying Tiger Line, was about to embark on a history-making polar flight.

As Prescott’s 707 disappeared into the sullen sky, his 11-year-old son, Peter, proudly waved goodbye. The boy would be flying back to L.A. with Bob and Helene Alexander, as well as Bob’s parents. Their pilot, veteran Paul Kelly, was now thrilling the crowd with passes that flaunted his Learjet’s maneuverability. Bob Alexander served as president of the annual Desert Circus.

After the exhibition, Kelly shuttled a group to L.A. but returned later, hastily boarding Peter and all four Alexanders. Not waiting for instrument clearance, he lifted off at 5:17 p.m. and radioed Thermal Flight Service. But when the station responded at 5:18 p.m., they heard only silence. The jet was last seen banking into Indio’s cloud-shrouded Little Chocolate Mountains. Moments later, a witness spotted a ball of fire.

Rescuers found no survivors. The National Transportation Safety Board determined that Kelly suffered spatial disorientation, probably caused by flying blindly through the storm.

On Monday, the headline “Alexanders Die in Crash” above the newspaper’s nameplate shocked the city. Helene Alexander is styled by Dantez during a ’60s fashion shoot for Palm Springs Life.

Krisel heard the news on the radio. “I put down my pencil,” he says. “Everything was over.” No Alexander houses would ever be built again.

Soon development migrated to the central part of the Coachella Valley and tastes changed. In the ’70s, Palm Springs and its modernism slid out of fashion. “Things might have been different” had the Alexanders survived, Krisel says. “They were ahead of the curve.”

“They owned considerable land with plans for building much more,” midcentury modern architecture expert Robert Imber says. “It boggles the mind to think what Palm Springs and the valley might have become had the Alexanders’ innovations continued.” Helene Alexander posed for Palm Springs Life in the early 1960s to promote one of her charities, poring over wallpaper, carpet, and drapery samples at Thunderbird Heights.

In 1993, GQ Creative Director Jim Moore bought an Alexander-built prefab and featured it prominently in his magazine layouts. It helped inspire an affluent, hip generation to make midcentury all the rage once again. The city awoke, a time capsule of enchanted architecture. Vanity Fair declared, “The faded jewel of Palm Springs is sparkling again.”
Of its gems, few were more beguiling than the Alexander houses, evocative of a carefree, sun-kissed lifestyle, historic, contemporary, and timeless. Their careful balance of economy and elegance still sets the standard for development throughout the desert.

Alexanders’ populist legacy is writ large in a city now renowned for its tolerance. That inclusion likely began with the family’s pioneering open-door policy in their homes, hotels, and clubs. When Jill Alexander Kitnick guest-chaired a tribute in 2011, she was hailed as returning royalty.

Now residing in Santa Barbara with husband Barry, she is blessed with her father’s discriminating eye and her mother’s creative flair. Jill often sits at Helene’s old sewing machine, crafting bereavement bears for hospice. “I do know something about grief,” she says.

On that stormy night 50 years ago, young Jill fell asleep, unaware of the tragedy. Monday, Helene’s brother picked her up for a surprise trip to Los Angeles. A vague explanation — something about her parents landing before they reached Burbank.

“As I listened to my music,” she remembers, “I figured it out.”

A pause. “The king and queen of Palm Springs,” Jill says, “were dead.”

She named her first son Alexander. “For all of them.”