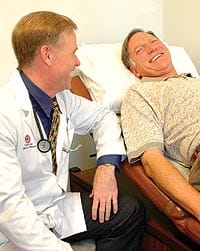 Are you frustrated with long waits for doctor appointments and hurried exams? Do you lament the end of the house call? Then you might feel better under a new type of medical care — luxury primary care. A small but growing number of physicians, fed up with the constraints of managed care, are converting traditional practices to “luxury,” “concierge,” or “boutique” practices, offering patients same- or next-day appointments with no waiting time, leisurely office visits, comprehensive physical exams and health screenings, 24/7 phone access, even house calls.

To make this extraordinary level of personal attention possible, the doctors are trimming the number of patients they treat from about 2,500 (yes, the typical primary care physician sees that many patients) to a few hundred. To make up for the reduced billings, these doctors charge an annual retainer ranging from $1,500 to as much as $10,000. For those patients willing to pay the price, the  doctor is virtually always “in.”

The concept of luxury primary care surfaced in the news in 1996, when the former team physician for the Seattle Supersonics launched MD2, charging a reported $10,000 annual fee per patient. Today, between 300 and 500 physicians in the United States operate such practices, according to the Society for Innovative Medical Practice Design (formerly the American Society of Concierge Physicians).

Dr. Peter St. Louis, a board-certified internist with an office on the Eisenhower Medical Center campus in Rancho Mirage, was the first Coachella Valley doctor to adopt this type of medical practice. He had opened his conventional practice in 1990. By 2002, he had between 2,000 and 3,000 patients. And it was a challenge to spend quality time with each one.

“The handwriting was on the wall that [the practice of] internal medicine was headed in the wrong direction,” he says. “The influence of managed care, the restrictions it imposed, the cuts in reimbursement — it was forcing doctors into hard choices to increase patient volume and decrease the amount of time spent with each patient or face a difficult business situation.”

Then he read an article about MD2 luxury primary care. Two weeks later, he received a call from a physician in the Seattle practice who wanted to refer one of his snowbird patients. Dr. St. Louis quizzed the physician about his business model. What he learned was good.

Over the next few months, he began sharing the concept with patients. By fall, about 60 indicated they were “strongly interested.” He then sent a letter to all his patients announcing his decision to convert to a luxury primary-care practice, limited to 200 patients. The annual fee was $5,000 per patient, or $8,000 for a couple. By the start of 2003, he had enrolled 100 patients, all of whom renewed in 2004. Today, he sees 160 patients.

“The fee allows me to keep the practice to a small number of patients and to be available to them pretty much at all times — to treat each patient as the only patient,” he says. That accessibility is something that Monica Worth, who lives at The Vintage in Indian Wells, values. She and husband Gary, their parents, and their 38-year-old son signed on, and appreciate the service.

“My husband had to go to the emergency room last month,” Worth says. “We called Dr. St. Louis, and he had the hospital all prepared; there was no waiting. Another time, I was feeling sick and called him on a Saturday. He met me at his office within half an hour and walked me over to the hospital for a chest X-ray. And he’s good at finding the right specialist, too. Our son was hurt in an accident and needed a certain type of orthopedic surgeon, who Dr. St. Louis tracked down. And when I was in the hospital for a hip replacement recently, he was there every day to check on me. It’s a wonderful feeling to know someone is watching out for you. This [type of practice] is truly the ideal. I’d give up a lot before I’d give up this.”

James Eskridge concurs. A member of Eisenhower’s Board of Trustees, he, his wife, and his father are patients of Dr. St. Louis.

“The access is a big part of what differentiates his practice,” he says. “My elderly father got the flu, and we were able to get him in to see Dr. St. Louis the same morning we called. The year before [joining Dr. St. Louis’ practice], my father also got the flu; that time, we ended up sitting in the doctor’s office for about two hours. My father was sick, and so was everyone around him.”

Dr. St. Louis has even made about 100 house calls since he converted his practice. “One time, a patient with Parkinson’s disease fell during the night and called my office the next morning,” he says. “In situations like that, it’s easier for me to go to the patient.

In fact, he’s aware of two other valley physicians transitioning to the luxury primary-care model.

“It still keeps me very busy, but the pace is different,” he says. “I’m never off call, but that’s the trade-off, and it’s what people want. It doesn’t mean you get more time to play golf. In fact, my golf game is worse than before, because I used to schedule in recreation to let off steam. But now, there’s less of a need for those outlets."